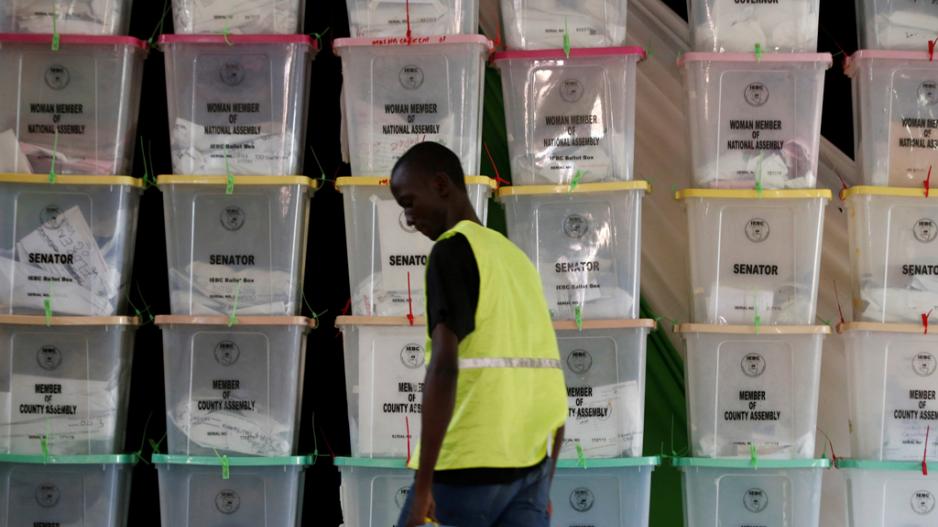 Ballot boxes are stacked at a tallying centre in Mombasa, Kenya, 9 August 2017.

NAIROBI - Hackers broke into the database of Kenya's electoral commission and manipulated the results of the election, the leader of the country's opposition coalition alleged on Wednesday.

Vote counting is ongoing in east Africa's strongest democracy after Tuesday's election where voters were asked to either re-elect President Uhuru Kenyatta or replace him with longtime opposition leader Raila Odinga.

Odinga claims hackers used the credential of a murdered employee of the electoral commission (IEBC) to hack into an electronic voting system and activate an algorithm that inflated Kenyatta's votes.

"These results are fake, it is a sham. They cannot be credible," Odinga told reporters at a morning press conference.

"This is an attack on our democracy. The 2017 general election was a fraud."

He later released what he claimed was a log from an IEBC server to support his allegations that the server was configured to increase Kenyatta's totals by 11 percent and cover up the modifications.

The log and Odinga's allegations have not been independently verified.

But Odinga believes the vote is actually in his favour and tweeted that a count of ballots by his National Super Alliance (NASA) coalition showed him in the lead.

He said the hacking affected all the results, both the presidential and the general election.

The hackers were able to access the system using the credentials of Chris Msando, a top IT official at the IEBC found tortured and murdered in late July, Odinga said.

He would not say how he got the information, saying he wanted to protect his source.

The 72-year-old is making his fourth bid for the presidency and has previously accused his rivals of stealing victory from him through rigging in 2007 and in 2013.

In 2007, the disputed vote resulted in two months of ethnically driven political violence that killed 1,100 people and displaced 600,000, a major blow to a nation seen as a regional bastion of stability.

The contested election in 2013 was taken to the courts and ended largely peacefully, though Odinga lost.

Odinga urged his supporters to "remain calm as we look deep into this matter," but added: "I don't control the people."