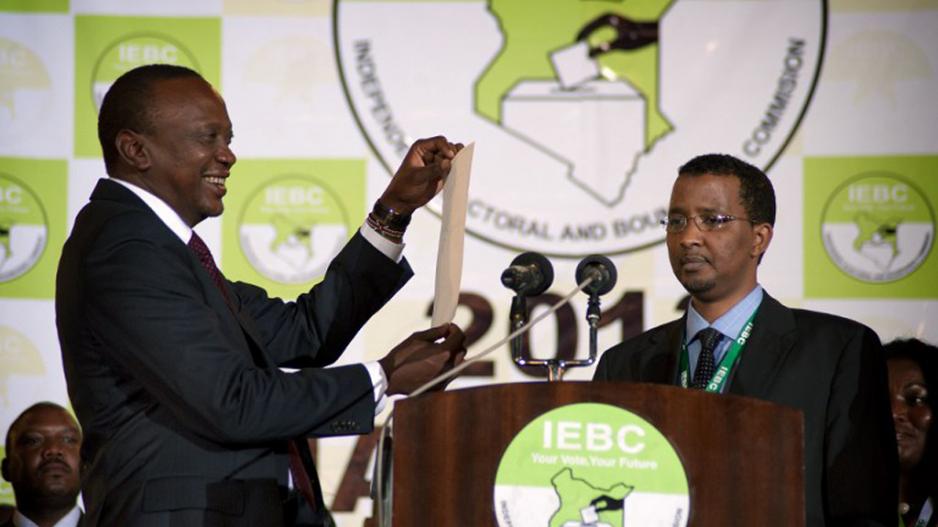 Uhuru Kenyatta (L) shows the certificate confirming him as Kenya's new President elect delivered by Isaack Hassan, chairman of the Independent Electoral and Boundaries Commission (IEBC) at Bomas, in Nairobi, on 9 March 2013.

NAIROBI - Kenya launched a voter registration drive Monday for elections in August 2017, in a bid to push numbers to a record 25 million voters.

"We are urging Kenyans to turn up in large numbers and register as voters," Independent Electoral and Boundaries Commission (IEBC) chief Isaack Hassan said at the launch in Nairobi.

"Currently we have 14.3 million voters in the register," he said, adding the commission was holding a month-long drive to boost numbers but that registration would still be possible after that.

Odinga and civil society groups filed legal challenges alleging the polls were marred by a series of irregularities that skewed the results.

The 2013 polls were peaceful apart from isolated incidents, avoiding a repeat of the ethnic killings and widespread violence that followed the 2007 polls, when more than 1,100 people were murdered and several hundred thousand forced to flee their homes.

Both Kenyatta and Deputy President William Ruto faced trial at the International Criminal Court over the violence.

However, crimes against humanity charges against Kenyatta were dropped in December 2014, in a case littered with allegations of witness intimidation, bribery and false testimony.

On Friday, Ruto celebrated an ICC ruling barring the use of recanted testimonies in the crimes against humanity case brought against him, which many believe will pave the way for the case to now also be dropped.