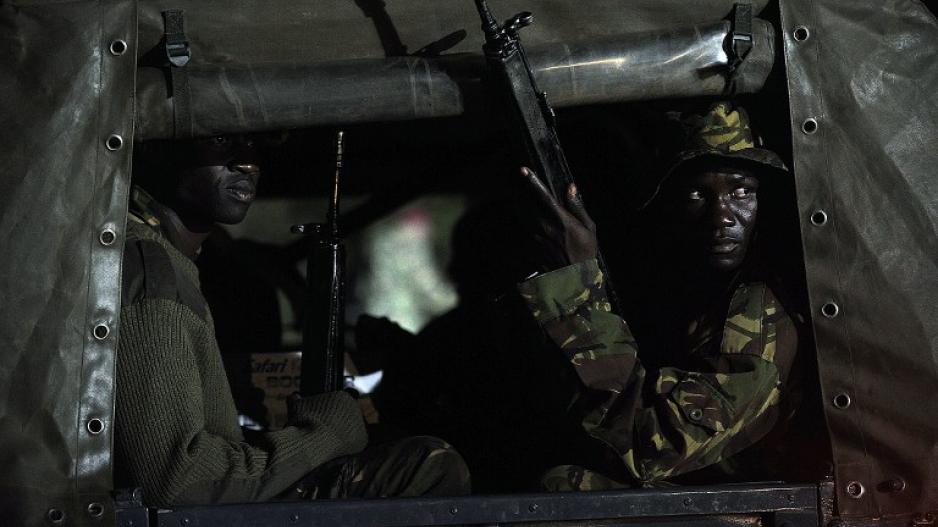 : Kenyan paramilitaries drive towards the Westgate mall on September 24, 2013 in Nairobi.

NAIROBI - Kenyan security forces have rounded up thousands of Somalis or Kenyans of Somali origin, leaving many languishing in a football stadium, amid a major crackdown on suspected Islamists blamed for a string of attacks.

The operation, which local media say has involved more than 6,000 men from the police and from the elite General Service Unit, started on Friday and appeared to have been focused on Eastleigh, an ethnic Somali-dominated district of the Kenyan capital.

The crackdown follows a spate of attacks in Kenya by suspected Islamists and sympathisers of Somalia&39;s Al-Qaeda-linked Shebab rebels.

Those arrested have been subjected to identity checks, with hundreds and maybe thousands held in police cells or a football stadium in Nairobi&39;s Kasarani district for further checks, officials and human rights activists said.

"We have arrested almost 4,000 people in this operation," Kenya&39;s Interior Minister Joseph Ole Lenku said on the ministry&39;s Twitter account on Monday night.

"For the last few months we&39;ve had heightened insecurity. Time has come for a mop up to restore order," he said.

A police source said 1,600 of those arrested since Friday had been released so far, although it was impossible to verify how many people are still being held inside the stadium as journalists were denied access.

The UN&39;s refugee agency said it was "concerned at the wave of arrests that have taken place during the weekend in Nairobi", and demanded that it be allowed access to those detained.

"UNHCR has sought access for itself and its partners to the detained refugees and asylum-seekers. This access will allow UNHCR to properly identify refugees, asylum-seekers and others of concern," the agency said in a statement.

The UN agency said that while it "understands the security concerns of the Government of Kenya", it also urged security forces "to uphold the rights of all those arrested and to treat them in a humane and non-discriminatory manner."