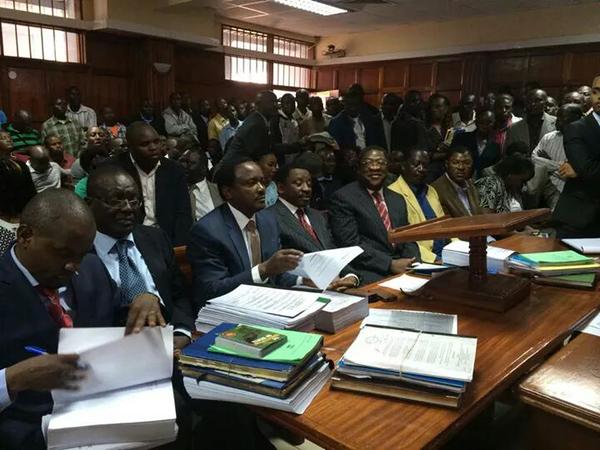 Kenya's opposition lodged a legal challenge in the High Court against a controversial new anti-terrorism law, arguing the east African nation is at risk of becoming a dictatorship.

NAIROBI - Kenya is looking to amend its anti-trafficking law so that foreign victims of human trafficking found on Kenyan soil are not treated as criminals but given greater protection, the government&39;s chief legal adviser said.

More than 20,000 people are trafficked through Kenya each year from neighbouring countries including Ethiopia, Somalia and South Sudan, the International Organization for Migration says. Many are trying to reach southern Africa when they are arrested by police and customs officials at Kenyan border towns.

In addition, Kenyan children are trafficked to work on farms, fishing boats and in private homes as houseboys and girls. Others are forced to beg and hawk goods on the streets - or else trapped in prostitution.

"Our traditional reaction to this has been to arrest the victims, charge them, jail them and then deport them," said Kenyan Attorney General Githu Muigai.

"Some of them are women and children. We need to rethink how we deal with the victims," he told the Thomson Reuters Foundation in an interview.

He said Kenya was a popular trafficking corridor because of its relatively good infrastructure that connects to the rest of East Africa and the Horn.

Kenya passed an anti-trafficking law in 2010 but it has proved difficult to secure convictions.

Muigai said the law needs to be amended to ensure that victims are taken care of, freed from trafficking rings and returned safely back to their countries.

"Of course for this to happen, some existing laws will have to be amended," he said.

Last year, the US State Department&39;s Trafficking in Persons report named Kenya as a source, transit and destination country for victims of labour exploitation and sex trafficking.

"We now have a higher awareness among all law enforcement agencies over the magnitude of the problem and the part that Kenya has to play in this global war," Muigai said.

Kenya is negotiating a trade deal with Saudi Arabia that will see the Gulf state export cheap crude to Kenya in exchange for a 100,000 person workforce of skilled and semi-skilled Kenyan labourers.

Saudi Arabia has for years been a destination country for many Kenyan women lured by the promise of well-paid work and a chance to escape joblessness at home only to discover abuse in the hands of employers.

READ: Four men extradited from Kenya to US on suspicion of heroin smuggling

"This trade deal will help us get into bilateral agreements with countries that are labour importers because we are labour exporters," Muigai said.

"This will allow us to intervene and ensure that all favourable labour requirements between our citizens and their employers are respected."