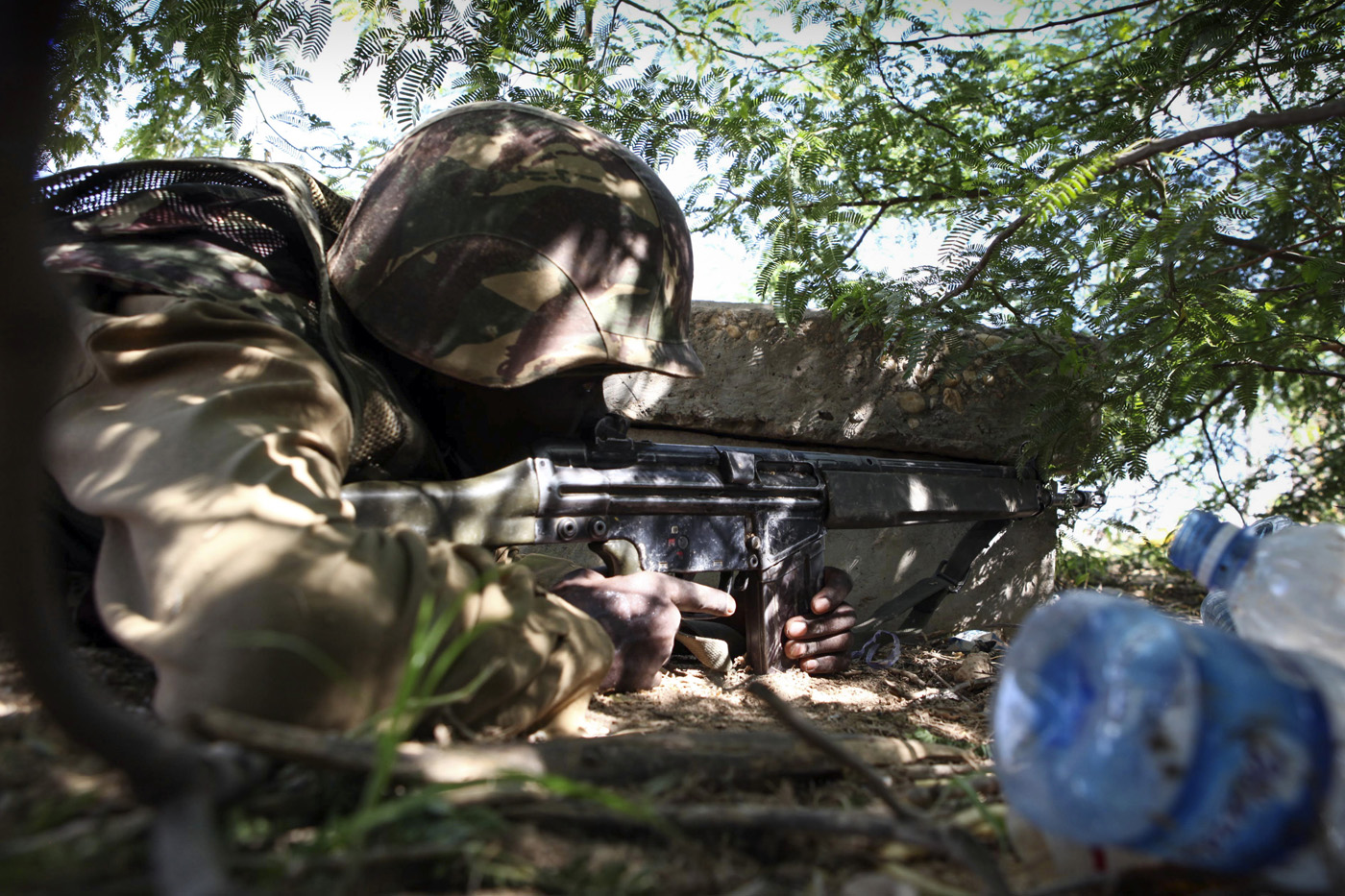 A Kenyan soldier aims his rifle as shots are fired in front of Garissa University in Garissa town, located 200km from the border with Somalia on April 02, 2015

With scores of students wounded and hundreds unaccounted for, police and soldiers surrounded Garissa University College.

They sealed off the compound and were trying to flush out the gunmen, Kenyan police chief Joseph Boinet said. Two gunmen were reportedly "neutralised".

Shabaab has claimed responsibility for the pre-dawn attack near the Somali border.

The group has links to al-Qaeda and a record of raids on Kenyan soil in retaliation for Nairobi sending troops to fight it in its home state of Somalia.

Authorities offered a 20-million shilling (R2,6m) reward for information leading to the arrest of a man called Mohamed Mohamud, described as "most wanted" and linked to the attack.

"We sorted people out and released the Muslims," he told Reuters.

"Fighting still goes on inside the college."

Boinet said the attackers had "shot indiscriminately" while inside the university compound.

Dozens of people had been killed, a policeman at the scene said, while students who escaped said there were "many" beheadings.

Escapees told News24 that they saw beheaded bodies when they were rescued by members of the Kenyan defence forces.

Reports also stated that the number of dead could be well over the 100 mark, as the group attacked at the time when there were many students asleep in the hostels.

The Red Cross said 50 students had been freed.

One image provided by a local journalist shows a dozen blood-soaked bodies strewn across a single university classroom, raising the likelihood that the death toll will rise significantly when the security services clear other Shabaab-held parts of the campus.

Interior Minister Joseph Nkaissery said 280 of the 815 students at the university had been accounted for and efforts were under way to track down the others, according to the Twitter feed of Kenya&39;s national disaster agency.

It did not say how many students remained trapped on the campus.

Some had managed to escape unaided.

"We heard some gunshots and we were sleeping so it was around five (am) and guys started jumping up and down running for their lives," an unnamed student told Reuters TV.

Sixty-five people were wounded, the disaster agency said. Four had been airlifted to Nairobi for treatment.

"We have 49 casualties so far, all with bullet and (shrapnel) wounds," said a doctor at Garissa hospital.

Shabaab, which seeks to impose its own harsh interpretation of sharia, has separated Muslims from Christians in some of its previous raids in Kenya, notably late last year in attacks on a bus and at a quarry.

Its repeated raids, together with attacks on churches by home-grown Islamist groups, have strained the historically cordial relations between Kenya&39;s Muslim and Christian communities.

Having killed more than 200 people in Kenya over the past two years, Shabaab has also brought the country&39;s tourism industry to its knees.

Thursday&39;s attack, which the US embassy in Nairobi said in a Twitter post it was "saddened and angered" by, undermined a renewed drive by President Uhuru Kenyatta to persuade foreigners the country is now safe to visit.

On Wednesday, he urged Kenyans abroad to help attract tourists back despite the wave of militant violence, criticising a warning from Australia of a possible attack in Nairobi and an advisory from Britain urging its citizens to avoid most coastal resorts.

Shabaab was responsible for a deadly attack in 2013 on the Westgate shopping mall in Nairobi.

Perhaps mindful of the close-range, blanket media coverage of that attack, police kept journalists at a checkpoint some distance from the Garissa campus.

Kenyatta was due to address the nation later on Thursday about the attack on Garissa, a town 200km from the porous Somali border that Shabaab has previously raided.

Grace Kai, a student at the Garissa Teachers Training College near the university, said there had been warnings that an attack in the town could be imminent.

"Some strangers had been spotted in Garissa town and were suspected to be terrorists," she told Reuters.

"Then on Monday our college principal told us ... that strangers had been spotted in our college... On Tuesday we were released to go home, and our college closed, but the campus remained in session, and now they have been attacked."

Many Kenyans living in the crime-ridden frontier regions blame the government for not doing enough to protect its citizens from the militants.

The group declared it would punish Kenya for sending troops into Somalia to fight it alongside African Union peacekeepers. – Additional reporting by News24

BREAKING: Kenya says about 500 out of the 815 students accounted for: interior minister GarissaAttack

IN SOLIDARITY: Garissa residents turn out in their numbers to donate blood for victims of GarissaAttack pic.twitter.com/9UNtE5gCHq