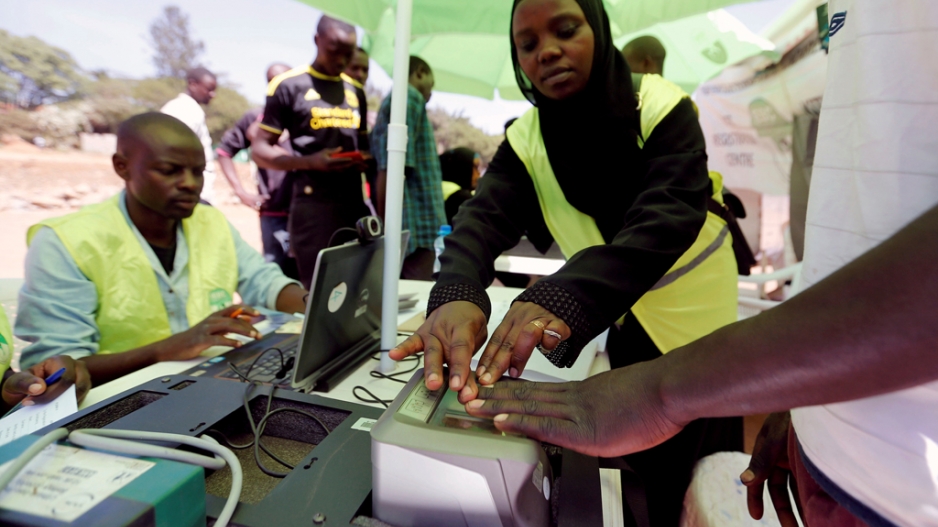 Officials from the Independent Electoral and Boundaries Commission (IEBC) records finger prints of a man as they collect data from the electorate during the launch of the 2017 general elections voter registration exercise in Nairobi, 16 Jan. 2017.

NAIROBI - Kenya's new electoral commission was sworn in Friday to replace a team forced to quit after violent protests by opponents who accused them of bias, mismanagement and corruption.

The seven new commissioners have only seven months to organise presidential and parliamentary elections which already have emotions flying high in the east African country.

The new chief of the electoral commission (IEBC), lawyer Wafula Chebukati, promised to deliver a "free, fair and credible election" after taking the oath of office at the Supreme Court.

The previous nine-member commission resigned in October under pressure from the opposition which led violent protests in May and June.

The IEBC had been mired in controversy since its establishment in 2010, when it replaced a discredited body that had presided over the disputed 2007 election which triggered politically-motivated ethnic violence that killed over 1,100 people.

During the subsequent peaceful poll in March 2013, a host of hi-tech safeguards -- including a biometric voter registration system -- failed on the day leading many, especially in the opposition, to doubt President Uhuru Kenyatta's victory and the ability of the commission to deliver a credible election this year.

Corruption allegations have also dogged the body, with a UK court in 2014 finding two directors of British printing company Smith & Ouzman guilty of making corrupt payments worth $430,000 (380,000 euro) in order to win a contract to supply ballot papers.

The scandal was dubbed "chickengate" after the alleged code word for a bribe used in communications between the firm and its Kenyan agent.

The new commission will be overseeing a final drive of voter registration, which started Monday and runs until February 14.

Authorities estimate that some four to six million people have yet to register on top of the current 15.9 million, crucial numbers that could swing the result.

Both Kenyatta -- who is seeking re-election -- and main opposition leader Raila Odinga, are touring the country encouraging voters to sign up.

In a bid to unseat Kenyatta, the country's main opposition parties last week banded together to form the National Super Alliance (NASA) -- however it remains to be seen if they can agree on a single candidate.