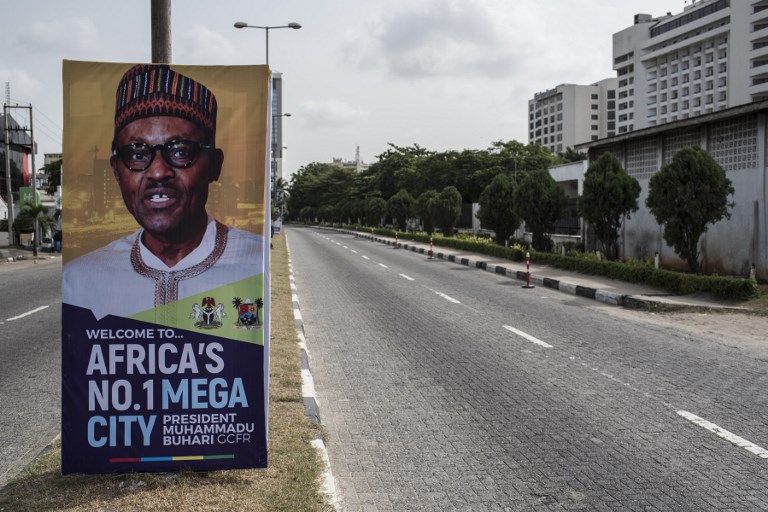 Empty streets outside the Eko Hotel & Suites in Victoria Island, in Lagos, on March 29 ahead of Nigerian President Muhammadu Buhari's two-day visit.

LAGOS - Nigeria&39;s economic capital was on a lockdown on Thursday as President Muhammadu Buhari makes his first official visit to the city since coming to power in 2015.

The president rarely travels outside of Abuja, home to the government seat, and has visited only a few of Nigeria&39;s 36 states over the past three years.

For Thursday&39;s visit, many businesses including banks, shops and markets were shut. Hundreds of commuters and workers were stranded at bus stops, to allow for a hitch-free visit by Buhari, with many forced to trek several kilometres to their destinations.

READ: Nigeria&39;s Buhari to tour hotspots after kidnappings and clashes

"I left home around 5am to enable me get to work. I had to use alternative routes because the main road has been blocked," Ahmed Busari, a port clearing agent, told AFP.

There was heavy security presence in the Lagos, a city of 22 million inhabitants, with police and para-military forces patrolling the streets.

Roads have been swept clean and painted in Nigeria&39;s national colours of white and green, and flags of the ruling All Progressives Congress (APC) party adorn all the routes where Buhari&39;s motorcade was set to pass through.

Banners and billboards with the president&39;s photographs were also put up along the roads.

The state government declared Thursday a work-free day for civil servants to allow them to welcome the 75-year-old leader.

During his visit, Buhari is set to launch the construction of a $1.5-billion (R17.7-billion) deep-sea port in Epe and tour the Eko Atlantic project, a new coastal city described as the "Dubai of Africa" being built from the coastline of Victoria Island, an affluent Lagos suburb.

He will also inaugurate a bus terminal and attend a colloquium in honour of APC national leader Bola Ahmed Tinubu, a former governor of the state.

An earlier planned trip to Lagos in May 2016 was aborted at the last minute, with a terse statement from the presidency saying Buhari had an ear infection.

He was then represented by Vice-President Yemi Osinbajo.