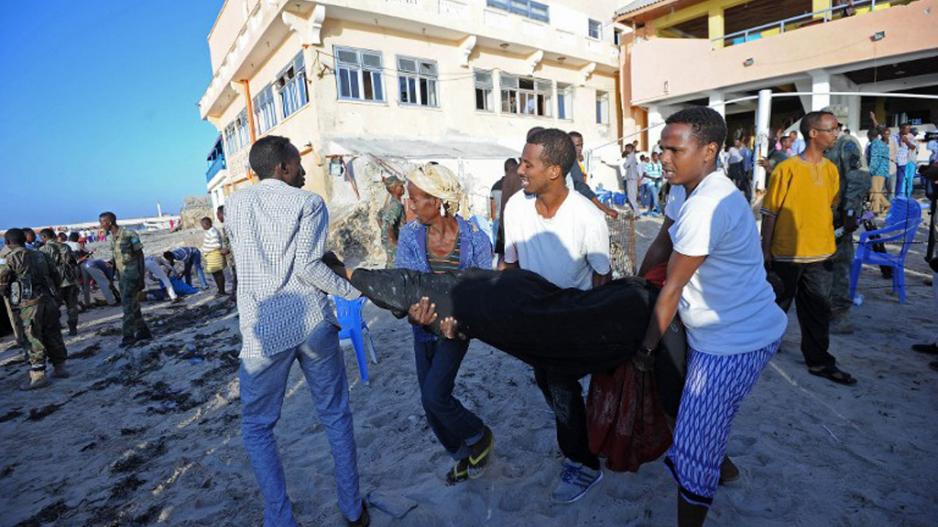 People carry away a dead body from the Lido beach on January 22, 2016 following an overnight attack on a beachfront restaurant in Mogadishu.

"They killed nearly 20 people, including women and children," Somali police officer Mohamed Abdirahman said, describing it as a "barbaric and brutal attack against innocent civilians".

The Lido beach area in Mogadishu is busy with restaurants, including upmarket establishments popular with business people and diaspora Somalis who have returned home to the city.

A Somali soldier walks past wrecked cars in front of the Lido seafood restaurant on 22 January 22, 2016 following an overnight attack on the beachfront restaurant in Mogadishu. MOHAMED ABDIWAHAB / AFP

After a huge explosion, gunmen burst into the restaurant on Thursday evening as diners were sitting down for their evening meal, at the start of Somalia&39;s weekend.

"The fact that they have chosen this location during a weekend night shows how merciless the Shabaab militants are," Abdirahman added.

"They wanted to kill more civilians -- but the security forces rescued most of the people."

The Al-Qaeda-linked al-Shabaab claimed responsibility for the attack, in which four of their gunmen were also killed, and one captured.

"The mujahedeen fighters targeted the Lido Beach," the militants said on the group&39;s Radio Andalus, calling it a "major operation against the enemy of Allah".

A Somali soldier surveys the damage at the Lido seafood restaurant on the Lido beach on 22 January, 2016 following an overnight attack on a beachfront restaurant in Mogadishu. MOHAMED ABDIWAHAB / AFP

Security minister Abdirazak Omar Mohamed told reporters that four of the attackers were shot dead by the security forces.

The minister added that one gunman was captured when security forces entered the building to end the attack.

Those who survived described how the gunmen sprayed those in the restaurant with automatic weapons.

Abdirahman Halane was close by the restaurant when the gunmen attacked, and said some of those killed were hit by an explosion as they tried to flee.

"The gunmen entered the popular Lido Sea Food Restaurant from the back door and started shooting... a few minutes later there was a heavy explosion at the front gate while people were trying to escape," Halane said.

"There was confusion, everybody started panicking, and some of them ran towards the gunmen and they were shot dead, I was lucky to escape."

Another witness described how some of those killed had died in the large blast, while others were shot dead at point blank range.

"There is a big mess here and many people died, I saw the dead bodies of 19 people who were killed during the attack," said Hussein Ali, who saw the bodies being carried out of the damaged building. "Some of the people died in the explosion while fleeing and others were shot dead up close."

Al-Shabaab, who are fighting to overthrow the internationally-backed government in Mogadishu, carry out regular attacks in the capital.