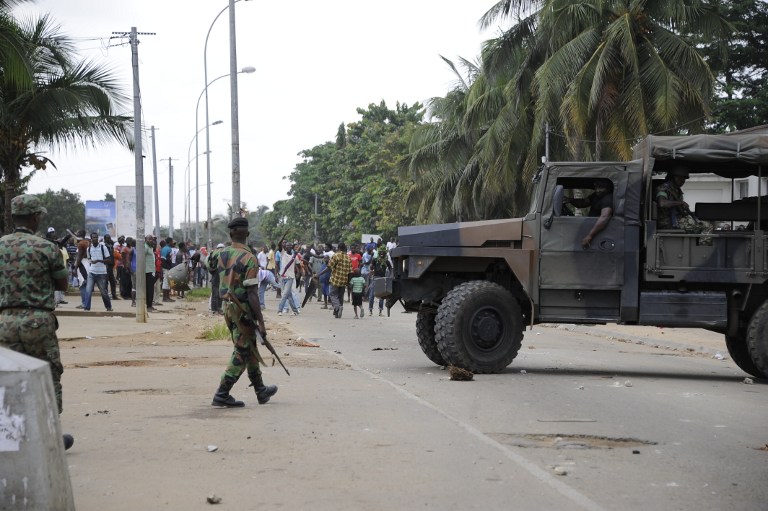 Soldiers restrain young residents during a demonstration in the Gobelet area of the Cocody district of Abidjan on July 22, 2014.

The men are suspected of an ongoing recruitment drive among displaced fellow Ivorians in the UN-run PTP refugee camp in southeastern Liberia, where they were detained on Monday, the source said.

"Four persons were arrested but one of them escaped. They were arrested in PTP while trying to recruit fighters to go to Ivory Coast and fight there," he told AFP.

"This is not their first time coming in to the camp to do such a thing. We have been following their activities for a while now. They have been transferred to the central prison pending investigation and trial."

At least six soldiers died in attacks targeting security forces in Ivory Coast&39;s restive west, close to the border with Liberia, on December 2.

Security sources and locals told AFP gunmen had attacked several army positions near the town of Grabo, in an area where ethnic tensions have spilled over into bloodshed numerous times in recent years.

A similar attack in the same area in January in which around 20 unidentified gunmen targeted security forces left two soldiers dead.

A political crisis was ignited by former Ivorian president Laurent Gbagbo&39;s refusal to accept election defeat to Alassane Ouattara in 2010, leading to a four-month conflict that claimed some 3,000 lives.

Thousands of Gbagbo&39;s supporters fled the far west across the porous 700km border into neighbouring Liberia when he was captured in April 2011.

In the worst incident in June 2012, seven UN troops from Niger, 10 civilians and at least one Ivorian soldier were killed while patrolling villages south of the town of Tai.

"The two governments need to work harder than they are doing now if they really want to end this nonsense," a Liberian security source told AFP.