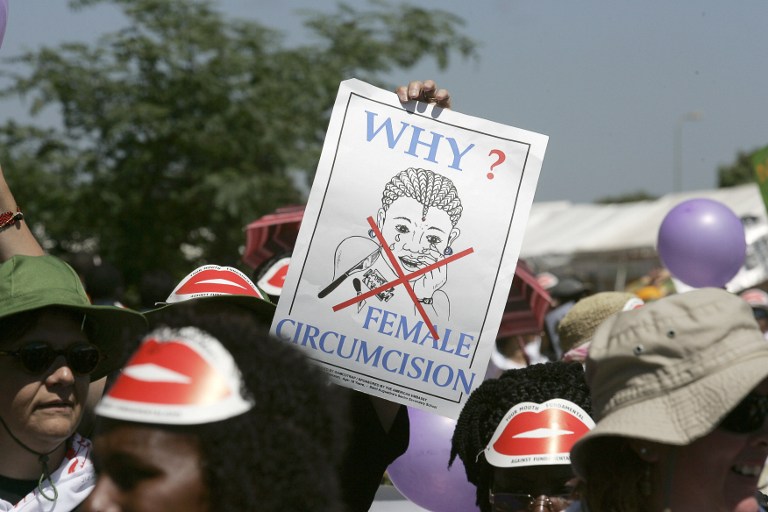 Members of the gay and lesbian community demonstrate against female genital mutilation on 23 January 2007 in Kasarani, Nairobi, Kenya. Kenya has shown a sharp decline in FGM, according to a report released by Unicef.

LONDON - Liberia has imposed a one-year ban on female genital mutilation (FGM) - a highly contentious issue in the West African country - but campaigners said on Thursday it may not be enforceable and urged new president George Weah to push for a permanent law.

The ban makes it an offence to perform FGM on anyone under 18 but it can still be carried out on adults with their consent.

Campaigners said FGM should be banned outright as even women who gave consent often did so under pressure.

"It is too early to celebrate as there is still a long way to go before there is zero tolerance to FGM in Liberia," said Grace Uwizeye, a consultant with international rights group Equality Now.

Activists have long campaigned for FGM to be outlawed in Liberia, a country of about 4.6 million people, where around half of women have undergone the procedure.

However, FGM has been an awkward issue for Johnson Sirleaf - Africa&39;s first female president - because it is overseen by a highly secretive and politically influential women&39;s society.

Supporters say the ritual, involving the partial or total removal of the external genitalia, is a key rite of passage. But it often causes health problems and can be fatal.

But according to an official statement, Johnson Sirleaf said on Friday that its omission undermined the law. Executive orders expire after a year.

Campaigners have received death threats for speaking out about the practice which remains shrouded in taboo and is often performed during initiation ceremonies in bush schools with girls sworn to secrecy on their lives.

FGM is practised in nearly 30 African countries, according to UN data, even though almost all have outlawed it.

"We call on President Weah... to keep up the pressure for a permanent law which bans FGM completely for all women and children," she told the Thomson Reuters Foundation.

Lakshmi Moore, acting country director with aid agency ActionAid, said there was a lot to do in the next year to push for a permanent and enforceable ban.

"We know this is still a taboo topic in some communities, but we are seeing signs that attitudes are changing," Moore said.