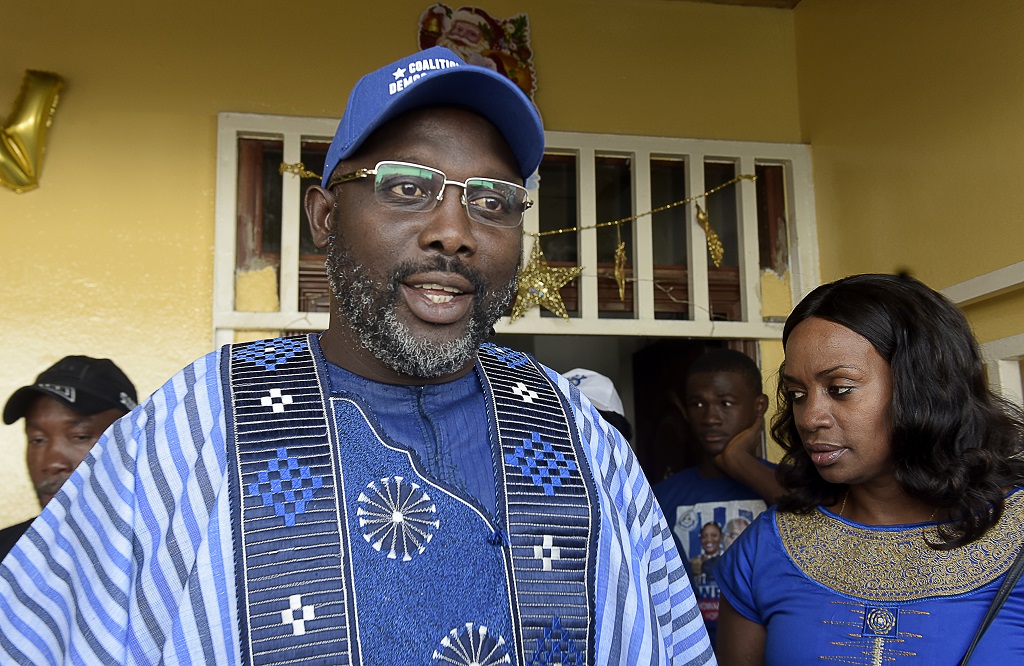 Liberian presidential candidate and ex-football international George Weah (L) speaks flanked by his wife Clar (R) outside their house in Monrovia on December 23, 2017.

MONROVIA - New president George Weah is nothing less than revered among Liberia&39;s youth, who view his rise from the slums to stellar success in European football as proof he can also turn around their fragile economy.

In his inaugural address on Monday, Weah thanked young voters for propelling him to power, telling them: "This is your government."

But depressed commodity prices, an inexperienced administration and a straitened budget could cloud their dreams and stir resentment, experts caution.

"We know that change will come," said Peter Forkpah, an unemployed man in his early 20s who spends his days kicking his heels in the rural county of Bomi.

More than 60 percent of Liberia&39;s 4.6-million population is under 25. Most are unemployed or under-employed, according to the government, although lack of reliable figures means the true extent of joblessness is unclear.

Many, though, voted for Weah in the belief he would quickly boost employment. Mired in poverty, Liberia ranks a dismal 177th out of the 188 countries in the UN&39;s Human Development Index.

Part of the problem stems from the country&39;s recent history.

The catastrophic 1989-2003 civil war stole the youth of an entire generation, forcing some into lives as child soldiers or displacing whole families into informal camps away from the fighting.

It also suspended schooling and formal training for the generation that came afterwards, as the country struggled to recover living standards in 12 years under ex-president Ellen Johnson Sirleaf.

"A lot of young people never had the opportunity that some people may have had in the 80s or 70s with &39;luxuries&39; like running water and electricity," said Charles Everliving King, who runs the Liberia Heals Initiative, which promotes reconciliation.

"Most young people want to be progressive, want to look for employment, want to go to school," he said. "They just want an opportunity to present to the world what they have to offer."

Liberia has the highest proportion of out-of-school primary-aged children in the world, according to the Street Child charity, who go on to become illiterate teenagers without the skills needed to form a dynamic workforce.

Thousands of these young people sell clothes, nuts, shoes and in some cases drugs, or work as day labourers in the rubber and palm oil industries.

Others, like Gabriel Wennre, 22, drive motorbike taxis and want Weah to pour money into vocational schooling.

"If vocational institutions are prioritised and the youth are encouraged to go there whether you are a high-school student or not -- think about what they could do to contribute to the development of Liberia," he said, taking a break from the horrors of the traffic in the capital, Monrovia.

Weah has said vocational training is a priority -- but has yet to provide any costed plans for the sector.

The "vast majority" of youth were unemployed, he acknowledged in a speech days ahead of being sworn in, and "most of them have already assumed family responsibilities", limiting access to formal schooling.

More self-sufficiency in agriculture is another of his stated priorities, and analysts agree the sector is one of the most promising for growth.

Former rebel leader and ex-president Charles Taylor would often set prices himself by decree, but Liberia today is a democracy, and one at the mercy of its commodities and exchange rate, as the vast majority of food, is imported.

This year Liberia&39;s entire national budget comes to $563.3 million (R6,7-billion), with iron ore prices still low and a currency that continues to depreciate.

Meanwhile, the African Development Bank noted in its 2018 outlook report "changing aid policies in advanced economies, particularly in the United States and the United Kingdom, could reduce donor funding, which accounts for approximately 60 percent of GDP".

Experts fear even with careful spending and the political will to tackle corruption that eats away at this meagre sum, the cost of living and better education could still take years to improve.

"The new president faces complex challenges -- and to deliver well in the areas he needs to will take time. He must be careful not to overpromise, and he must ensure that citizens feel included in his plans and implementation," said Elizabeth Donnelly, Deputy Head of London-based Chatham House&39;s Africa Programme.

For now, however, hope is alive, sometimes driven by a sense that Weah, who emerged from bleak poverty to conquer the glamorous world of football and now the presidency, has a touch of the divine.

"We pray that God speaks to him. If God speaks to the president he will do good for this nation," explained Gabriella Sleh, 24, as she prepared food for sale outside Weah&39;s party headquarters.