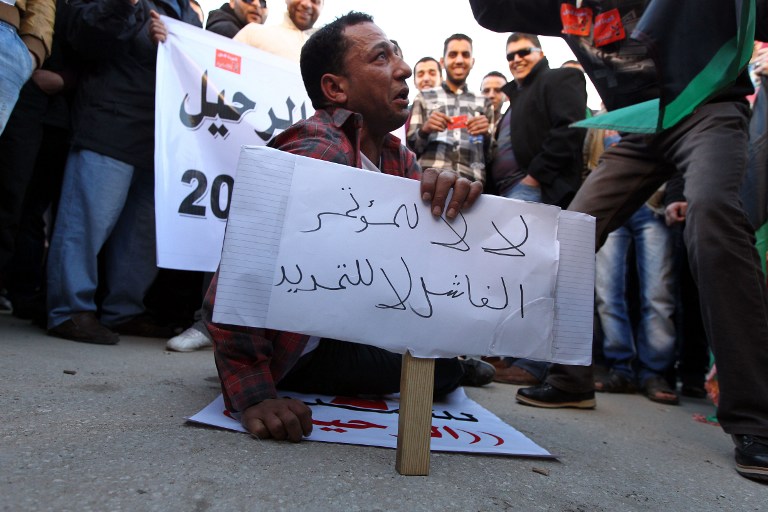 Libyan protesters demonstrate against the extended mandate of the General National Congress, the country's highest political authority, in the eastern Libyan city of Benghazi, on February 14, 2014.

TRIPOLI - As Libya prepares to commemorate three years since the uprising that ousted and killed dictator Muammar Gaddafi, the country is haunted by a nightmare of lawlessness that has overshadowed people&39;s dreams of a better life.

Monday marks the start of the February 17 Revolution, when angry residents of the eastern city of Benghazi took to the streets to protest against Kadhafi&39;s four-decade rule.

Gaddafi reacted violently, touching off a NATO-backed war that devastated much of the country, killed thousands and eventually led to his capture and killing by rebels eight months later.

Ahead of the anniversary, the United Nations has expressed grave concern about the course Libya is taking.

It called on Libyans of all political stripes "to rise above partisan interests and... work by all means to prevent inflaming tensions which could lead the country to slide into lawlessness and chaos".

Sadly, however, lawlessness and chaos are already everyday concerns.

The latest example came just Friday, when the government and armed forces denied rumours of an impending coup after a retired general called for parliament and the government to be suspended.

How that could have been taken that seriously is difficult to understand, as the post-Gaddafi government has never managed to rebuild an army capable of providing minimum security, much less run the country on its own.

As put by Anna Boyd, senior Middle East analyst with IHS Country Risk: "The army is trying to break Libya&39;s current political deadlock but is too small and weak to be able to take over government in Tripoli and enforce its writ".

Indeed, just last week, gunmen tried to storm army headquarters but guards stopped them, but only after they ransacked cars and stole some weapons.

The lack of security is evident on a daily basis.

Common criminals roam the streets, while rival tribes in various parts of the country shoot it out to settle long-standing disputes.

Politicians, security officials, journalists, judges, even the US ambassador, have been gunned down in a wave of lawlessness that has grown since Gaddafi was captured and killed in October 2011.

Disgruntled citizens have managed to blockade and shut down Libya&39;s oil terminals, threatening to bankrupt a government that relies almost exclusively on oil revenues to operate.

Even Prime Minister Ali Zeidan was briefly kidnapped in October by members of one of the militias that fought to oust Gaddafi and have since become Libya&39;s powerbrokers.

Zeidan has been also politically cornered by Islamists who have quit his government and are blocking his attempts to put together a new cabinet.

The General National Congress, the country&39;s top authority which has so far failed its mandate of setting the stage for adopting a new constitution and holding elections, has angered many Libyans by extending its mandate.

Thousands have taken to the streets to protest that decision but the GNC insists closing up shop this month as originally intended would have left a complete political vacuum.

The GNC&39;s decision to extend its mandate has raised fears of confrontations between armed elements who support it and those who do not and deepened the political divide.

Amid all the political bickering, the GNC last week adopted a new roadmap and timetable, which allow for two scenarios.

A general election would be held at the end of the year if a constitutional body to be chosen next week adopts a new charter within four months of its election.

The commission, to be made up equally of members from Libya&39;s three historic regions, would decide on key issues in a new constitution, including the system of government, the status of minorities and the role of Islamic sharia law.

However if, within 60 days, it decides it cannot complete the job, it would call for immediate presidential and legislative polls for a fresh period of 18 months.

Last month, the electoral commission said only 1.1 million out of an eligible 3.4 million voters had even signed up to elect the panel.

People "have not seen an improvement in their lives (since Gaddafi&39;s overthrow) or a sincere will to put an end to the anarchy undermining the country," says political science professor Ahmed Mahmoud.

In the past three years, he said, the "new Libya has been like an incubator, producing other new Gaddafis," a reference to the war lords who are the only real law in the country.