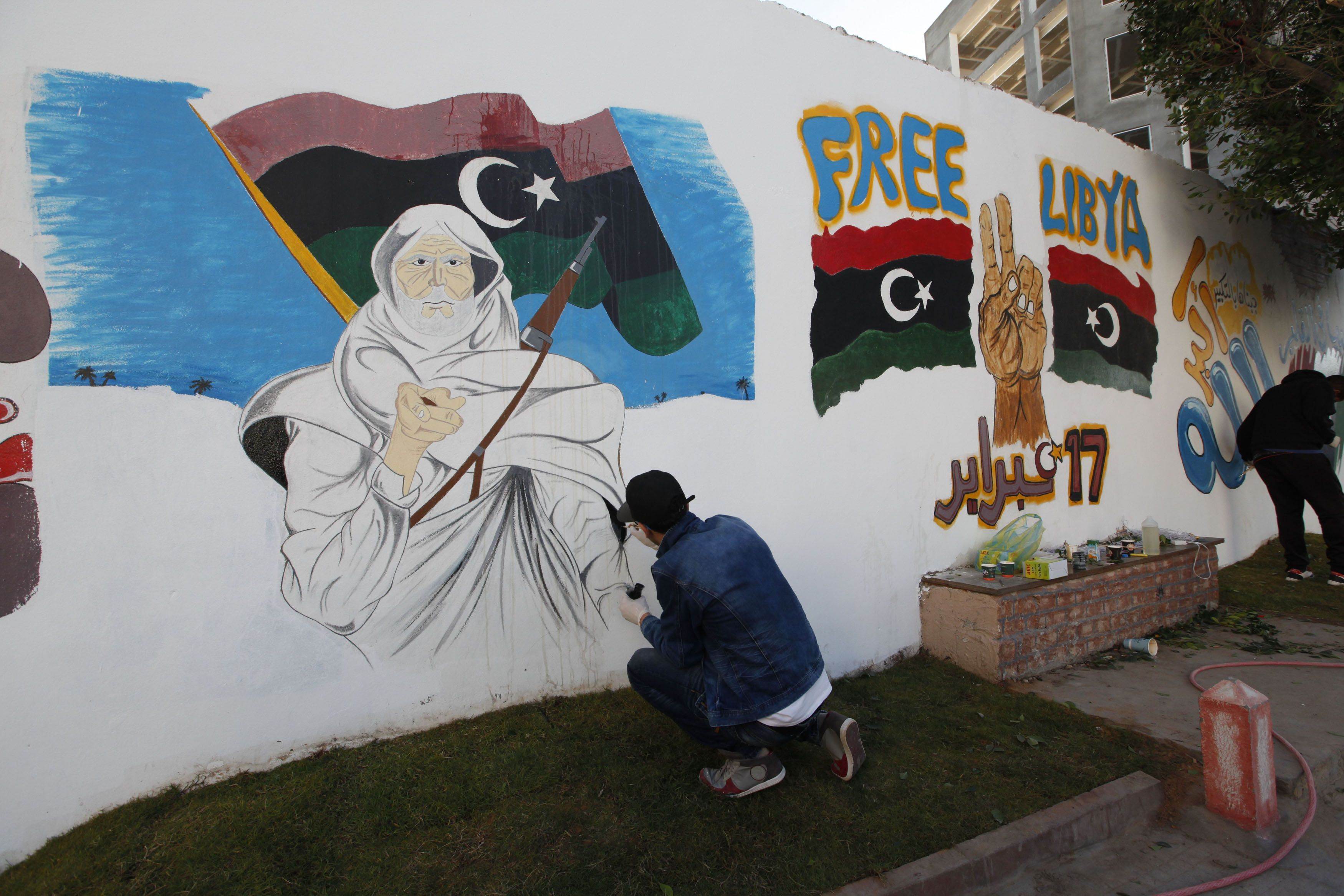 Libyans draw graffiti on a wall along a street in the capital Tripoli, February 16, 2014, in preparation for celebrations of the third anniversary of the February 17 revolution.

TRIPOLI - Libyans on Monday marked the third anniversary of their revolt which ousted dictator Muammar Gaddafi fearful for the future of a country plagued by lawlessness.

Putting on a brave face, Prime Minister Ali Zeidan, who was briefly abducted last year by militants, said revolution had achieved the goals of "ending tyranny and securing freedom of expression".

"The February 17 Revolution is a challenge that Libyans must live up to," he said in a speech to the nation broadcast on television Sunday night, acknowledging the "difficulties" ahead.

Although no official ceremonies were organised for the anniversary, spontaneous celebrations have taken place since Saturday across Libya and are due to culminate in festivities later Monday in the capital Tripoli.

The streets have been decked with Libya&39;s revolutionary flag, volunteers have cleaned up streets and painted over sidewalks, and multicoloured lights strung across the main roads.

But for many Libyans there is little to celebrate.

"There is noting to be proud about," one Tripolitanian said on Twitter.

University student Ahmed Fitouri agreed. "Nothing has been accomplished these past three years. We are stuck."

Three years after the uprising, Libya is still struggling to rebuild an army capable to end waves of unrest blamed largely on well-armed Islamists and ex-rebels.

The government and the interim parliament, the General National Congress, have come under increasing criticism by Libyans who accuse them of corruption and failing to give them a better life.

Common criminals roam the streets, while rival tribes in various parts of the country shoot it out to settle long-standing disputes.

Politicians, security officials, journalists, judges and even the US ambassador have been gunned down in a wave of lawlessness that has grown since Gaddafi was captured and killed in October 2011.

Disgruntled citizens have managed to blockade and shut down Libya&39;s oil terminals, threatening to bankrupt a government that relies almost exclusively on oil revenues to operate.

On the political front, the GNC, the country&39;s top authority, infuriated Libyans when it decided to extend its mandate by 10 months beyond a February 7 deadline.

But deputies on Sunday said the parliament has reached consensus on holding early elections, apparently yielding to popular pressure and threats that divisions could unleash further unrest.

The economy of oil-rich Libya has also taken a beating due to chronic security problems and industrial actions since the end of Gaddafi&39;s four-decade autocratic rule.

The oil ministry and the World Bank estimate Libya has lost more than $10 billion in revenues because of the crisis that erupted last July when striking workers and pro-autonomy demonstrators in eastern Libya began blockading the country&39;s main terminals

Post-war reconstruction has been slow and major infrastructure projects put on the back-burner, while the multinationals have yet to make a return.

The World Bank, in a report issued last month, stressed "the urgent need for economic diversification in order to ensure long-term financial and economic stability".

"We must set aside out differences on the occasion of this historic event, in memory of the martyrs who fell so that we can enjoy freedom," said Tripoli University professor Ali Toukabri.

Analyst Soufiene al-Machri blamed the impasse on politicians who are hanging on to power.