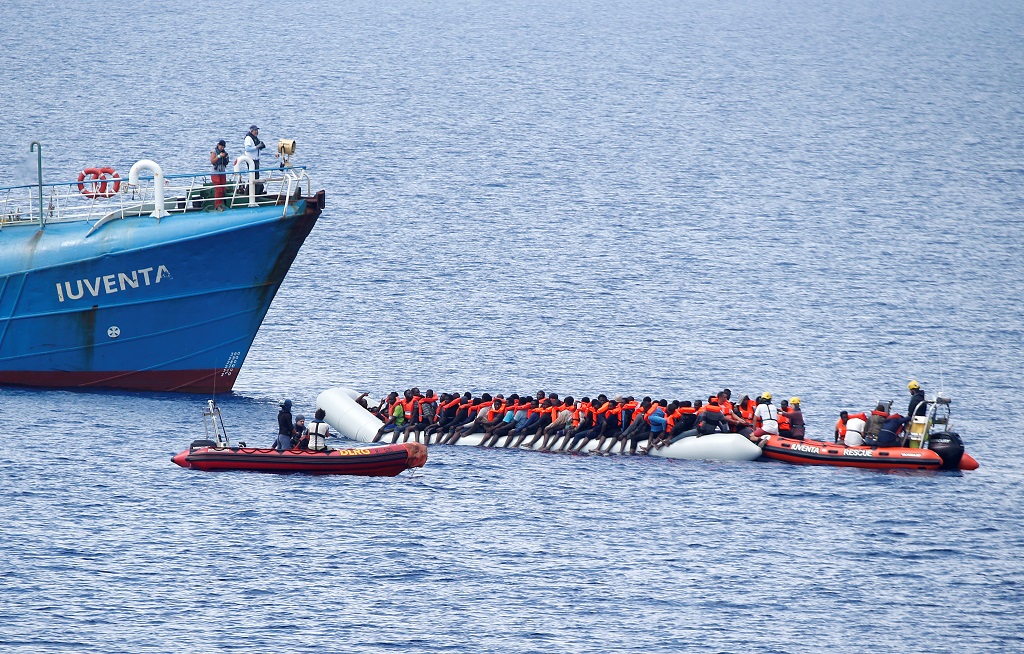 Migrants on a dinghy are rescued by German NGO Jugend Rettet ship "Juventa" crew in the Mediterranean sea, off the coast of Libya June 18, 2017.

LIBYA – The Libyan navy on Thursday ordered foreign vessels to stay out of a coastal "search and rescue zone" for migrants headed for Europe, a measure it said targeted NGOs.

Italy will deploy 2 military ships to Libya in an effort to deter illegal migration and human smuggling into Europe https://t.co/PpqAxuv3eZ

Six years since a revolution that toppled longtime dictator Moamer Kadhafi, Libya has become a key departure point for migrants risking their lives to cross the Mediterranean to Europe.

Tens of thousands of migrants have resorted to paying people traffickers for the journey, often on overcrowded and unseaworthy boats.

Charities have dispatched boats to rescue migrants from drowning, while Libya and Italy, where the vast majority land, have worked together to stem the flow.

"We want to send out a clear message to all those who infringe Libyan sovereignty and lack respect for the coastguard and navy," Libyan navy spokesman General Ayoub Qassem told a news conference in Tripoli.

General Abdelhakim Bouhaliya, commander of the Tripoli naval base where the conference was held, said: "No foreign ship has the right to enter" the area without authorisation from the Libyan authorities.

Libya has "officially declared a search and rescue zone", said Bouhaliya, without specifying the scope of the exclusion zone.

Qassem said the measure was aimed against "NGOs which pretend to want to rescue illegal migrants and carry out humanitarian actions".

He urged humanitarian organisations to "respect our will... and obtain authorisation from the Libyan state even for rescue operations".

Italy has also said it wants to keep a tighter rein on NGOs helping the multinational search and rescue operation by making them sign up to a new code of conduct.

Right to asylum at risk

Its crew is suspected of taking on board migrants delivered directly to them by people traffickers, and of allowing the smugglers to make off with their dinghies to be used again.

The Libyan coastguard has accused NGOs of aiding people traffickers in their lucrative business.

Italy has sent naval vessels at the request of Libya's UN-backed Government of National Accord to assist Tripoli in intercepting migrants, on a mission disputed by rival authorities in eastern Libya.

More than 111,000 migrants have reached Europe by sea so far this year, the vast majority of them arriving in Italy, according to the latest figures from the International Organization for Migration.

Over 2,300 have died attempting the crossing.

On Tuesday, the United Nations's new envoy to Libya endorsed Italy's drive to stem the flow of migrants leaving the North African state for Europe, despite misgivings among human rights groups.

Rights campaigners fear Italy's focus on strengthening the Libyan coastguard to ensure boatloads of migrants are intercepted before reaching international waters could place thousands of people with a right to asylum at serious risk.

But Ghassam Salame, a former Lebanese culture minister appointed in June to head UN operations in Libya, described the cooperation between Tripoli and Rome as a "very constructive" way of dealing with an acute problem.

"It would be absolutely unrealistic to ignore the seriousness of the challenge of irregular migration," Salame said after meeting Italian Foreign Minister Angelo Alfano in Rome.

Apart from the Libyan navy providing technical assistance to the coastguard, Rome has also supplied Tripoli with new patrol boats and training.

Alfano said the cooperation was beginning to bear fruit, in a reference to a more than 50-percent fall in the number of migrants rescued at sea during July, compared to the same month in 2016.