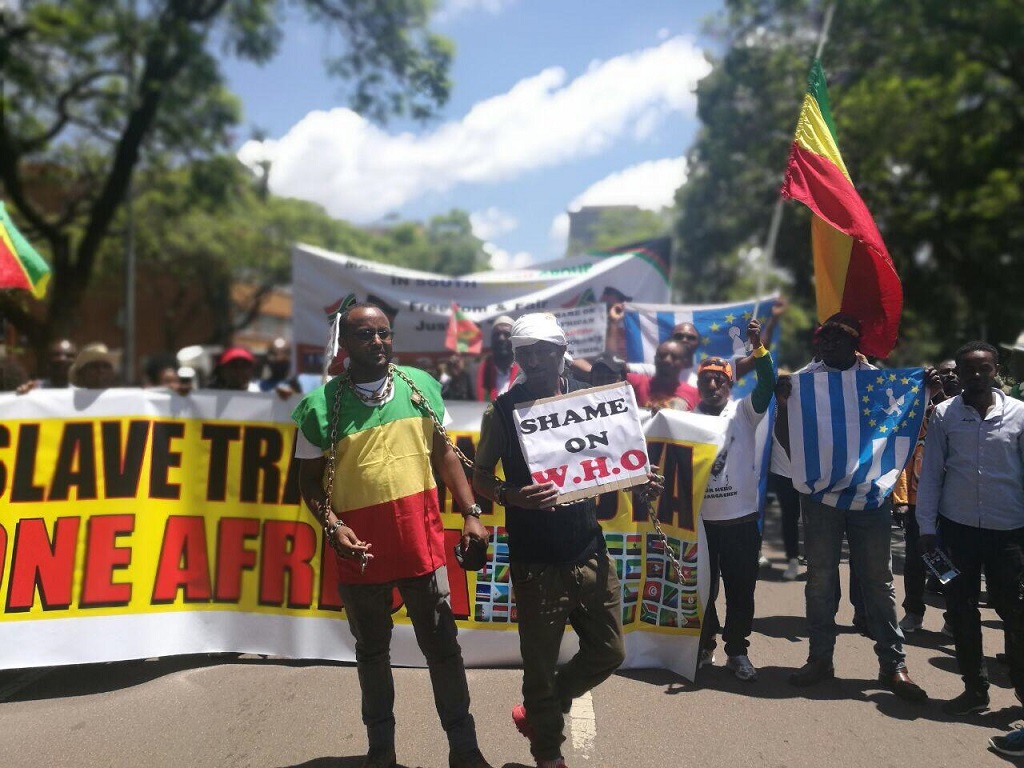 Hundreds of African Diaspora Forum members took to the streets of the capital protesting against slavery on 12 December 2017.

PRETORIA – Hundreds of Johannesburg-based African Diaspora Forum (ADF) members took to the streets of the capital Pretoria, raising awareness and demanding action over the violation of the rights of African migrants who are unlawfully detained, abused and auctioned off as labourers in Libya, an act that constitutes modern-day slavery.

“We are here to express our anger and our shock, after hearing that in parts of our continent, people are being auctioned like goods. The youth, to whom we are supposed to give hope, are being destroyed in Libya. The youth there is ready to take the route of the Mediterranean [ocean]. We know that every single year, about 3,000 young people are dying in the Mediterranean [sea] because they want to reach Europe,” ADF chairperson Marc Gbaffou told journalists at the protest.

READ: Organisation to march to Union Buildings against slavery in Libya

“This is raising our anger, and that is why we are here. We are here to question what is happening in our continent. What do we call good governance? What about the human rights abuses in our continent? That is driving our youth out of the continent, and we don’t address these issues. Most of the time, we are used at pointing fingers at other people, saying they are the origin of our challenges, but we don’t talk about our leaders who want to be in power forever.”

Gbaffou said the situation in Libya highlights the ADF’s standpoint in South Africa, where the immigrants’ rights group has been discouraging Pretoria from detaining undocumented immigrants wooed to Africa’s most industrialised economy.

“We have been trying to convince the South African government that putting people into detention [attracts] some costs, and some abuse can happen. We don’t encourage that. In the Libyan situation, people are currently being dehydrated in the [detention] camps. There are about 42 camps hosting around 700,000 people, and the people are trapped there. People are sick and there is no medical attention, the people have no food. Some of the people are dying,” said Gbaffou.

He said similar complaints of lack of food, medication and other basic necessities are constantly raised by undocumented immigrants detained at South Africa’s infamous Lindela Repatriation Centre.
“Every week, every month, we are at Lindela, and the migrants who are at Lindela talk to us. This is a real situation in camps. Whenever you put people in camps, they are abused. There are some issues you might think you address easily by putting people in camps but once they are there, it gives you another picture of what should happen.”

“We are shocked and outraged by the reports of the auctioning of African migrants in Libya and the unlawful detention of thousands of them, including pregnant women and children,” said Zuma, who has concluded his visit to the Ivory Coast, where he attended the Fifth African Union-European Union Summit held in Abidjan.