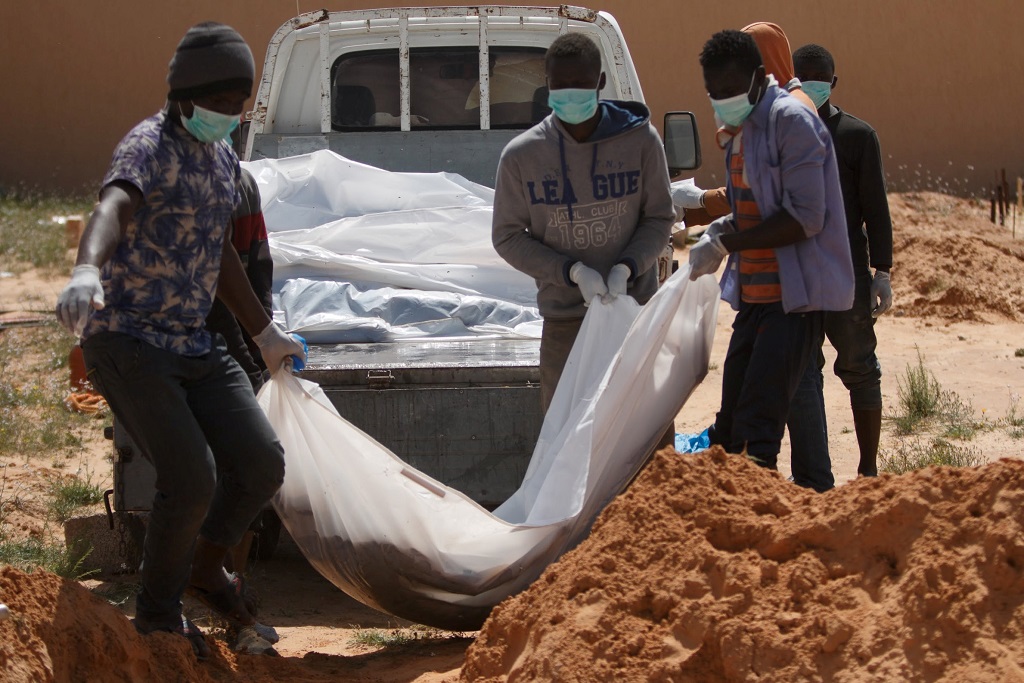 Men carry bags containing dead bodies of migrants as they bury them in a cemetery for illegal migrants in Sabratha, Libya April 18, 2017.

TRIPOLI - Libyan fishermen found the bodies of 28 migrants who appeared to have died of thirst and hunger after their boat broke down off the coast of Sabratha city, a Ministry of Interior official said on Tuesday.

Since Libya fell into chaos after Muammar Gaddafi&39;s fall in 2011, the country has become the main departure point for migrants hoping to reach Europe by sea.

More than 150,000 have made the crossing to Italy annually over the past three years.

The 28 migrants, including four women, were found after sunset by the fishermen, who towed the vessel to shore, Interior Ministry security unit commander Ahmaida Khalifa Amsalam told Reuters.

The victims were buried together in a cemetery for illegal migrants, he said.

"Their boat stopped because the engine was broken," he said.

READ: Thousands of migrants stranded off coast of Libya

He did not give details of any of the migrants&39; nationalities, but many illegal migrants are from sub-Saharan Africa.

Smugglers often pack migrants in flimsy inflatable dinghies, dispatching them to sea to get picked up by rescue ships and other vessels once they reach international waters.

Some are intercepted and turned back by the Libyan coastguard.

"The camps are in terrible condition. Women are being sexually abused, people are crowded together in small buildings and are being kept like animals. These are intolerable conditions that must be changed," he said.

Kobler said it was important to improve conditions in the camps, but the biggest priority should be to address the underlying reasons for the migration flows.

The UN migration agency last week reported that growing numbers of African migrants passing through Libya were traded in what they called slave markets before being held for ransom, forced labour or sexual exploitation.

Libya is the main gateway for migrants attempting to reach Europe by sea, with more than 150,000 people making the crossing in each of the past three years.

More than 600 are known to have died at sea, while an unknown number perished during their journey north through the desert.

The German Foreign Ministry concluded in January that African migrants faced executions, torture and other systematic rights abuses in camps in Libya, according to media reports.