Madagascans return to protest after clashes 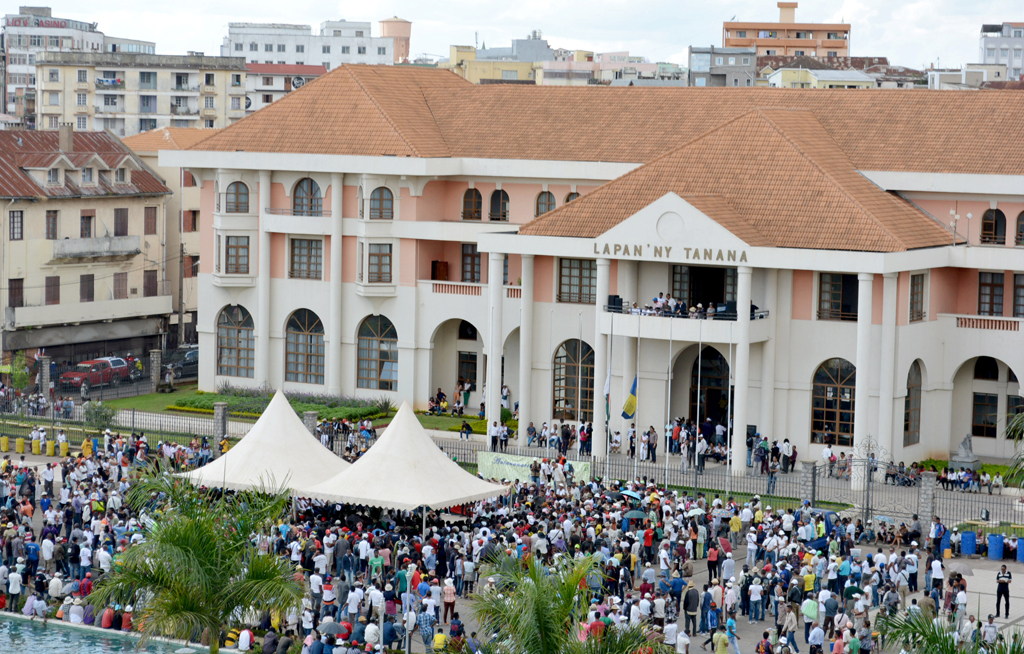 Demonstrators from the opposition attend a march in protest after the president denounced unrest in which two people were killed as a "coup" intended to divide the country's people in Antananarivo, Madagascar April 23, 2018.

ANTANANARIVO, Madagascar - Thousands of Madagascan opposition supporters returned to the streets on Monday to protest against the president and a deadly crackdown by security forces on demonstrations.
Two people were killed and at least 16 people wounded at protests in the capital Antananarivo on Saturday that President Hery Rajaonarimampianina denounced as an attempted coup.
Large crowds gathered on Monday to honour the victims, parading quietly pass two coffins that were placed in May 13 square, the symbolic heart of the capital Antananarivo.
As on Sunday, security forces had banned access to the square in the city centre during the morning before withdrawing to allow the protesters to gather peacefully.
"To avoid violent clashes, which could cause great damage between Madagascans, we chose to leave the place we had previously protected," Defence Minister General Beni Xavier Rasolofonirina told reporters.
But he warned the protesters that the police would "never accept any state institution established outside the election process because that is what is consistent with the constitution."
The demonstrators have been protesting against new electoral laws that the opposition claim could bar some candidates from standing in upcoming presidential elections.
The large Indian Ocean island, which has been beset by decades of political instability, is due to hold polls in late November or December.
Authorities had declared the Saturday protest as illegal, but about 1,000 opposition activists defied the order and security forces used tear gas to break up the gathering.
Election tension
Elected in 2013, Rajaonarimampianina has not yet announced whether he will stand for re-election.
But two former heads of state have already mooted runs: Marc Ravalomanana, who was president from 2002 to 2009, and Andry Rajoelina, who removed Ravalomanana during a coup.
Both were barred from running in 2013 and their parties have been involved in the protests.
Ravalomanana and Rajoelina attended Monday&39;s protest in honour of Saturday&39;s victims.
Ravalomanana urged authorities to listen to the opposition&39;s grievances, saying "no one is stronger than the people gathered here".
President Rajaonarimampianina made a television address on Sunday after returning from a brief trip abroad.
"I call on all the people of Madagascar to be calm and respect democracy, but what happened on Saturday is nothing but a coup," he said.
"We must all be convinced that a coup d&39;etat brings no solution for our country&39;s future."
The European Union mission in Madagascar called on the country&39;s political actors to exercise restraint and expressed its support for "credible, transparent and inclusive presidential elections in 2018".
The African Union representative in Madagascar, Ahmed Youssouf Hawa, has also called for calm and accountability.
"Madagascar does not need to plunge back into a difficult situation just a few months before the elections," he said in a statement.