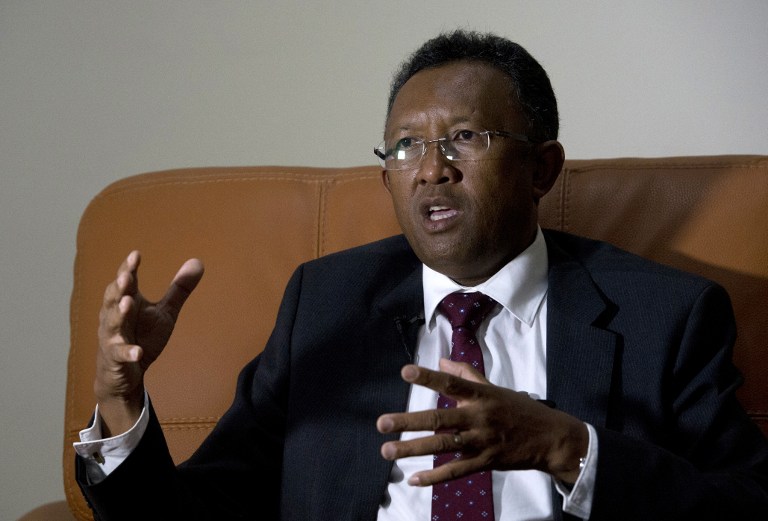 Presidential candidate Hery Rajaonarimampianina of Hery Vaovao ho an'i Madagasikara party. He has a commanding lead in Madagascar's presidential run-off, although his victory speech will have to wait until a court rules on alleged voting irregularities.

ANTANANARIVO - Madagascar&39;s opposition condemned President Hery Rajaonarimampianina on Saturday for rejecting their nominations for a "consensus" prime minister, who it is hoped will lift a crisis sparked by controversial electoral reform laws.

Madagascar has been rocked by violent protests since April 21 that initially sought to oppose the new laws the opposition said were crafted to bar their candidates from participating in elections planned for later this year.

The Constitutional Court has ordered President Rajaonarimampianina to form a government of national unity with a "consensus prime minister" to avert a full-blown crisis.

"We nominated lawmakers Christine Razanamahasoa, Roberto Tinoka  and Hanitriniaina Razafimanantsoa to be prime minister but they were all rejected by (President) Hery Rajaonarimampianina" said opposition parliamentarian Arnaud Tody during a well-attended protest vigil in the May 13 square in the capital Antananarivo.

Since April 21, hundreds of opposition supporters have occupied the square, initially to protest the president&39;s proposed electoral reforms which they claimed were designed to bar their candidates from running in elections slated for this year.

But after those proposals were overturned by the courts, the protests have become a full-blown movement to oust Rajaonarimampianina.

Madagascar&39;s Constitutional Court said on Friday that the current government must resign by June 5 and that the president should name a new prime minister by June 12 at the latest to avert a political vacuum.

The Constitutional Court ruled that the composition of the new unity government should proportionately reflect the outcome of the last legislative elections in 2013.

However, interpreting this ruling has triggered fierce debate between the government and the opposition.

Both sides say they hold the majority in parliament, where many legislators have switched allegiances since 2013.

"If the prime minister is not (picked) from among the 73 lawmakers who have led the May 13 square protests then there will be no solution" to the crisis, added Razafimanantsoa.

All of the opposition nominees are members of the Mapar party which is led by former president Andry Rajoelina.

"We hope that the president will choose a neutral political figure because we are looking for consensus -- not someone from one or other political camp," said senate leader and leader of the ruling HVM party Rivo Rakotovao.

Neither domestic nor international efforts to resolve the crisis have yet borne fruit.

The most recent effort, a gathering of the National Reconciliation Council that included government and opposition delegates, finished inconclusively on Friday.