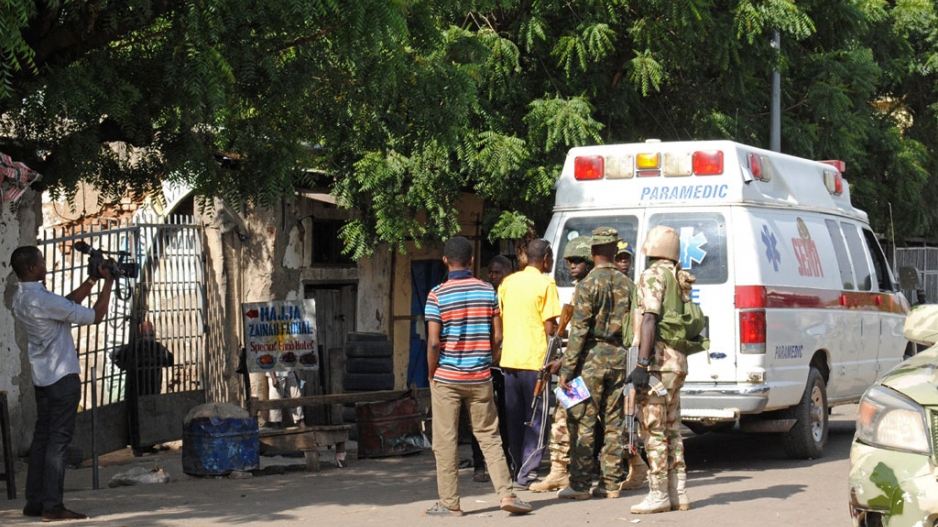 Emergency services and soldiers gather at the scene of a suicide bomb attack on a market in Maiduguri, after two girls approximately seven or eight years old blew themselves, killing themselves and wounding at least 17 others.

MAIDUGURI - Mangoes and watermelons, prayer mats and Chinese-made utensils are again filling the stalls of Maiduguri's markets, as they recover after years of Boko Haram violence.

Traders sweating behind wheelbarrows overloaded with goods fight their way through the crowded alleyways of northeast Nigeria's biggest city.

But in the birthplace of Boko Haram, appearances are often deceptive.

The eight-year insurgency has brought the Borno state capital to its knees, after centuries as a commercial crossroads between the Sahel and central Africa.

The historic trading hub has been transformed into a centre of humanitarian aid. Life runs according to the rhythm of the aid agencies that have flocked there in the last year.

But Modu Kolo Dunoma, the head of the Monday Market -- the city's biggest and a frequent target for Boko Haram's bombs and bombers -- told AFP: "We face a difficult situation.

"Farmers still can't go back to their farms and most of the food items are imported from other states. Prices have really gone up."

On the edge of the city, never-ending lines of lorries spend days waiting to take their cargoes to Dikwa and beyond to neighbouring Cameroon.

Maiduguri's main source of revenue -- the transport of goods to land-locked countries such as Chad, Central African Republic and Sudan -- is struggling to take off again.

The army has reopened some main roads but ambushes still happen frequently and vehicles are not allowed to travel without a heavily armed military escort.

Maiduguri's needs remain huge, however, with the population having doubled since 2009, as more than one million people sought safe haven from Boko Haram attacks.

Confined to camps or living among the local population, they survive on external aid.

According to the United Nations, nearly two million people in the northeast region are currently suffering from severe acute malnutrition and 5.5 million are in need of food aid.

The international community belatedly realised the scale of the humanitarian crisis in northeast Nigeria and most of the NGOs now in Maiduguri only arrived from mid-2016.

Since then, daily life in the camps is an endless round of food distribution. Huge gleaming white 4x4 vehicles belonging to aid agencies ply the roads.

Long queues form at bank ATMs every morning as people try to get money from cash transfer schemes to see them through to the end of the month.

Muhammadu Ali, a 48-year-old civil servant, fled the border town of Ngala with his wife and 10 children. His meagre salary is not enough for his family to live on.

Not everyone is suffering hardship. Certain sectors have even benefitted from the influx of foreign non-governmental organisations and the displaced people.

"I can tell you we make money," laughed Ali Garba Bashehu, the head of Dolphin, one of the few estate agents in Maiduguri.

Property owners who fled Maiduguri in their droves, thinking the city would fall to the insurgents, sold their houses for next to nothing.

The same properties are now rented out for a fortune.

"NGOs don't know what to do with the money," said Bashehu, as he gave a tour of Maiduguri's government reserved area, its high walls topped with barbed wire.

"This hotel is fully leased by the year," he said stopping in front of a large white building. "You can't book a room.

"A house worth one million naira per year can cost up to five million today."

In more modest areas, too, prices have soared.

Baba Wuroma Usman, who is in his 50s, rented out a two-bedroom property for 100,000 naira three years ago. Now, he asks for double that.

The UN said that $1.05 billion is required in Nigeria this year to fund its humanitarian programmes. At a conference in Oslo in February, donors pledged $672 million.

Despite people's dire need for food, clean water, shelter and healthcare, there is profiteering and corruption.

The presidency has even admitted that nearly half of the food sent to the victims of Boko Haram never reaches them, and Nigeria's anti-corruption agency has launched several investigations.

In April, the country's top civil servant, Babachir David Lawal, was suspended for his alleged role in the fraudulent attribution of contracts for reconstruction in the northeast