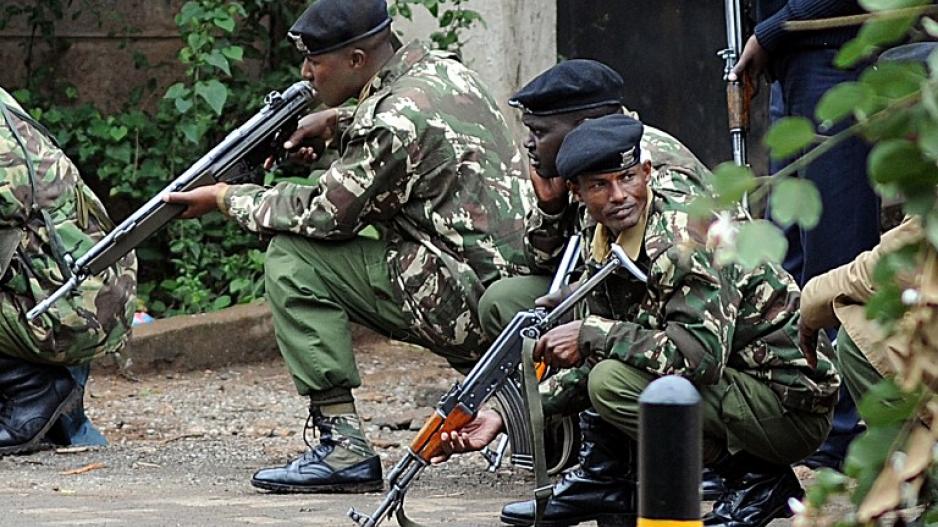 Armed Kenyan policemen take cover outside the Westgate mall in Nairobi on September 23, 2013. At least 10 suspects have been arrested, and at least 3 attackers have been killed.

Editor&39;s note: eNCA&39;s Robyn Kriel is in Kenya and has given us the latest on the incident. Watch in the gallery.

Mombasa - Kenyan authorities in Mombasa have arrested two suspected terrorists who were discovered with weapons and explosives on Tuesday afternoon.

A third suspect, who managed to evade arrest, is being hunted by police.

It was thought that intelligence officers in Nairobi managed to intercept communication between men in the city and Somalia. A vehicle in the Chamgamwe area also lead officers to become suspicious.

On Tuesday, authorities said they thwarted what could have been a major terrorist attack.

Two of the men arrested are believed to be Somali nationals.

Explosives were found in a vehicle, along with an AK-47 rifle.

Bomb experts said the amount of explosives was three times the amount used in the 1998 US embassy bombing in Nairobi.