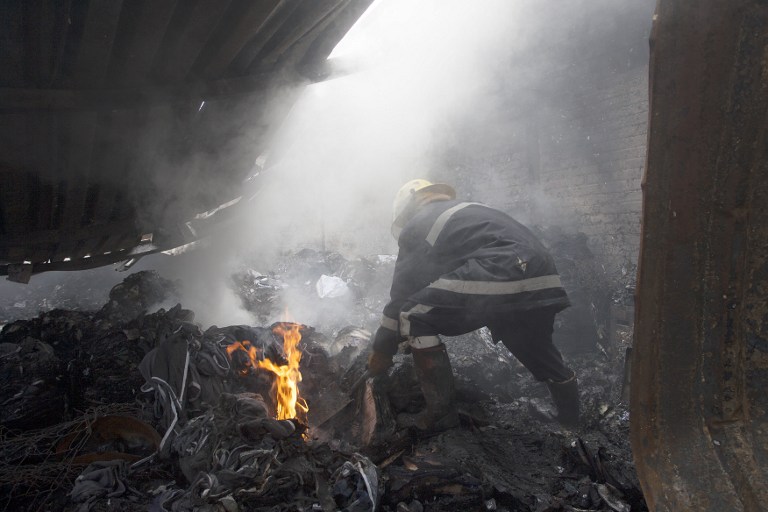 A Fireman uses a shovel to remove Polling Staff Uniforms from the burnt debris in a Malawi Electoral Commission (MEC) warehouse following a blaze in the Capital Lilongwe.

MALAWI - A mob in southern Malawi burned seven men to death for allegedly possessing human bones for use in witchcraft, police said on Wednesday.

The seven were "found in possession of human bones and the mob took it upon themselves to burn them with petrol," Kirdy Kaunga, head of the Nsanje district police, told AFP.

A traditional chief said local suspicions were aroused as a result of the movements and telephone conversations of one of the seven, who was found to have a bag containing the bones.

"He was chased and arrested," chief Tengani, who only uses one name, told AFP.

"The man is said to have confirmed that his bag contained human bones and that&39;s when the mob began rounding up the seven and burned them, one by one."

Images from the scene showed the men being burned on a patch of grass surrounded by locals, with some children looking on.

Police arrived after the incident, which took place on Tuesday in Nsanje, the southernmost district of Malawi. So far, there have been no arrests.

James Kadazera, police spokesman for the southern region, said experts would conduct a postmortem on the bones in the bag "to establish whether they are albino humans or not".

Albinos, who have white skin and yellow hair as a result of a genetic disorder, are regularly killed for their body parts, which are used in witchcraft rituals in several in African countries including Malawi, Mozambique and Tanzania.

"We also want find out who actually torched these people," Kadazera added, saying police condemned "mob justice" where members of the public took the law into their own hands.

Identification of the victims was proving difficult due to their severe injuries, he said.

At least six albinos have been killed in Malawi since a surge in attacks which began in December 2014, although UN agencies put the figure at nine.

Last summer, Malawi launched an investigation into the root cause of the albino murders, in a move backed by the United Nations Children&39;s Fund.

In September, a teacher was arrested on suspicion of trying to sell an albino schoolgirl for $10,000, and several others are awaiting trial in connection with albino-related crimes, including murder, abduction and possession of their bones.

The government has also held awareness events to try to protect the minority.