Mali facing 'remnants of terrorism', says president ahead of poll 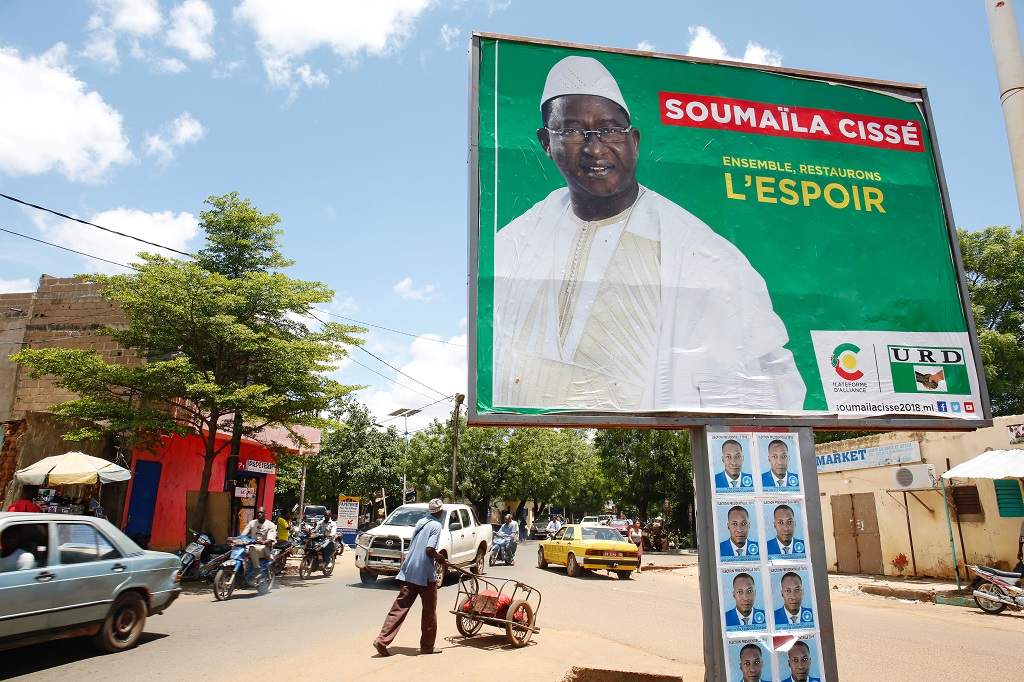 A man walks behind an electoral billboard of Soumaila Cisse, leader of the Union for the Republic and Democracy party (URD), in Bamako, Mali 24 July 2018.

BAMAKO - Malian President Ibrahim Boubacar Keita, speaking ahead of elections on Sunday, said attacks that have hit the country in recent months were "pockets of violence and remnants of terrorism".

Keita defended his record, saying he had helped to stabilise the country in the heart of the fragile Sahel region since his election in 2013.

"There&39;s no more war-mongering in Mali today," Keita -- widely known by his initials of IBK -- told reporters Tuesday on the return flight from a tour of three African countries to woo diaspora voters.

"There are pockets of violence, remnants of terrorism because neither Serval nor Barkhane could drive out all the terrorists," he said, referring to former colonial power France&39;s two successive military operations in the region.

The country has been gripped by violence since jihadists exploiting a 2012 ethnic Tuareg separatist uprising took over key cities in the north.

The extremists were largely driven out in France&39;s Serval operation launched in January 2013 -- but large stretches of the country remain outside the control of the foreign as well as Malian forces.

Hundreds of people have died since the start of 2018 in inter-communal violence and attacks by jihadists, which have included a suicide bombing of the headquarters of a five-nation anti-terror force, the G5 Sahel.

Keita, 71, said the violence had "metastasised to central Mali," but said the state was making a "colossal financial effort" to combat it.

Violence in the region has increased over the past three years between nomadic Fulani herders and sedentary Bambara and Dogon farmers.

Keita blamed the jihadists of "injecting this virus, this poison", by stirring up accusations against one side or another.

Residents of central Mali "have been living together for centuries," IBK said. "What is new is this attempt at whitewashing terrorism and making us believe that there is a policy of eliminating, or even perpetrating, genocide against the Fulanis."

"I say no. We are a people of many races, of Fulanis, Mandinkas, Bozos, Bambaras," he said.

Keita also warned sternly against groups seeking to set up militias in the troubled religion.

"You have no right to ensure territorial integrity, this is not your mission," he said. "We will only ever allow the Malian army to be armed."

Keita is facing Soumaila Cisse as his leading rival in the first round of voting on Sunday.

His critics have attacked him for spending too much time abroad and accuse him of poor governance and security failures.