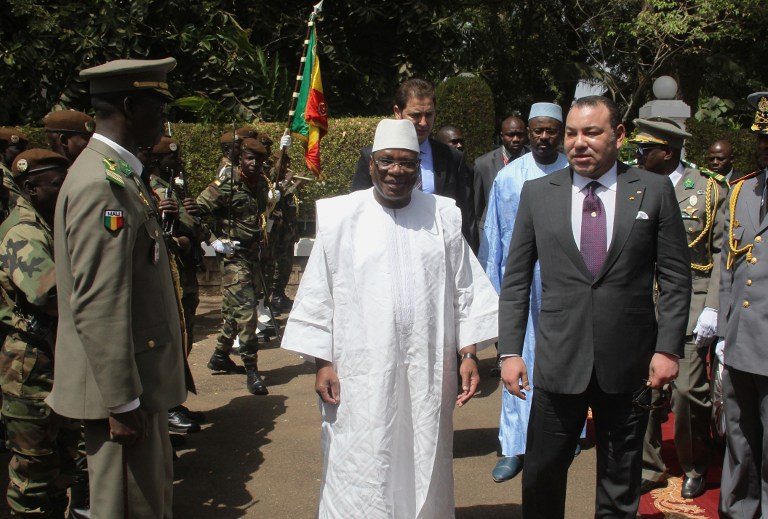 Morocco's King Mohammed VI (R) is welcomed by Mali's President Ibrahim Boubacar Keita as he arrives at the Koulouba Palace during a state visit in Bamako, Mali, on February 20, 2014.

BAMAKO, Mali - Mali will adopt a law on "national consensus" that may give amnesty to rebels who took part in a revolt in 2012, President Ibrahim Boubacar Keita said in a New Year&39;s speech.

Keita, in a nationwide message late Sunday, said the law would draw on a so-called charter for peace, unity and national reconciliation, which he received in June as the outcome of a two-year-old peace pact between the government and Tuareg rebels aimed at shoring up Mali&39;s shaky security.

The "draft law on national consensus... (will) include exemption from prosecution for all those who are implicated in armed rebellion but who do not have blood on their hands," he said.

It will also include "measures of conciliation", he said.

These will be implemented after trials that are currently under way are fast-tracked to conclusion, and after compensation for victims is speeded up.

Ideas include a programme to rehabilitate "all those who lay down their weapons and publicly undertake to renounce violence," Keita said.

But he insisted the package is "neither a reward for impunity nor an avowal of weakness, and even less a denial of right for the victims."

"It offers the possibility for reintegration for all those who let themselves be carried away by armed conflict, who have not committed unacceptable acts and who show sincere repentance," he said.

Northern Mali was overrun in March and April 2012 after al-Qaeda-linked jihadists hijacked a rebellion by ethnic Tuareg groups.

A French-led military intervention in 2013 rolled back the jihadist threat.

However, the region remains highly unstable, prompting France and the United Nations to maintain a high military profile, and a peace deal with the Tuaregs signed in 2015 is still shaky.

Keita&39;s speech came on the heels of a government reshuffle, and ahead of presidential elections this year.

He has appointed a new prime minister, Soumeylou Boubeye Maiga, who is viewed as a loyalist, and installed 36 new ministers, including a new foreign minister.