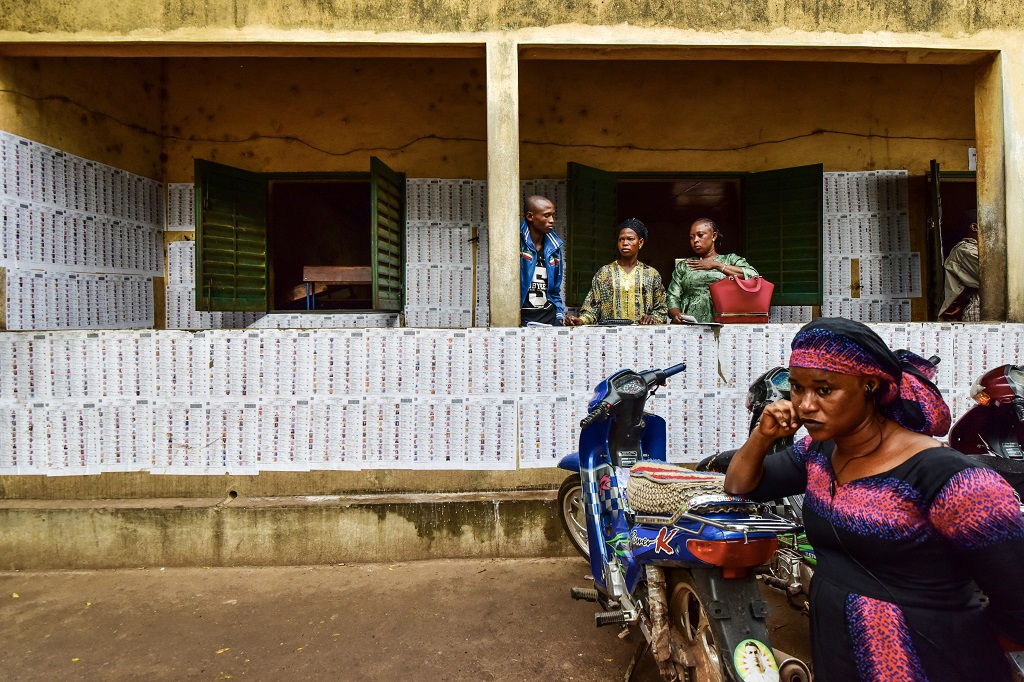 Veteran jihadist Mokhtar Belmokhtar speaks in this undated still image taken from a video released by Sahara Media. Mali's chief prosecutor said on Saturday that it has evidence that jihadist group Al Mourabitoun, led by Belmokhtar.

BAMAKO, Mali - Malians went to the polls on Sunday for a crucial presidential election as attacks disrupted voting in areas already beset by deadly ethnic and jihadist violence.

After a campaign marred by armed attacks, 23,000 polling stations opened at 0800 GMT and are scheduled to close at 1800 GMT.

"I have my voting card, I am going to vote for my country and for my favourite president," said Moriba Camara, a 35-year-old teacher, in the Sebenicoro district of the capital Bamako.

Despite the deployment of 30,000 security personnel throughout the country, several incidents were reported in the north and centre.

President Keita, 73, leads a crowded field of 24 candidates -- just one of them a woman -- bidding for the presidency which he has held since 2013. He also voted in Sebenicoro, surrounded by journalists and supporters.

READ: Malians prepare to vote under shadow of terror threat

His record on security has been a dominant theme, with opponents, including several former ministers, accusing him of incompetence.

The international community hopes the poll will strengthen a 2015 accord that Mali, a linchpin state in the troubled Sahel region, sees as the cornerstone for peace.

On the campaign trail, Keita -- commonly known by his initials IBK -- highlighted the achievements of the peace agreement between the government, government-allied groups and former Tuareg rebels to fight jihadi fighters in the country&39;s north.

Despite the heavy security presence, polling stations and ballot boxes were burned by unidentified armed men.

Voting could not take place in the village of Lafia, in the northern Timbuktu region, after the ballot boxes were set on fire, according to local authorities.

"Overnight from Saturday to Sunday, armed men arrived at the town hall where the ballot boxes and electoral material were held," a local official told AFP.

The source added the boxes were burned after "jihadists" fired shots into the sky. "One of them said God does not like elections."

Violence has continued to hit in the lead-up to Sunday, despite the presence of 15,000 UN peacekeepers and 4,500 French troops and a heralded five-nation anti-terror force, the G5 Sahel. A state of emergency enters its fourth year in November.

More than 300 civilians have died in ethnic clashes this year, according to UN figures and an AFP toll.

Many deaths have occurred in the central region of Mopti, involving the Fulani nomadic herder community and Bambara and Dogon farmers.

Jihadist violence, meanwhile, has spread from northern Mali to the centre and south and spilled over into neighbouring Burkina Faso and Niger, often inflaming communal conflicts.

The main Al-Qaeda-linked jihadist alliance made its presence felt on the final day of campaigning Friday, dubbing the election a "mirage" that would do nothing for the Malian people.

"These elections are nothing other than the pursuit of a mirage and our peoples will reap nothing but illusions, as they are used to doing," said alliance leader Iyad Ag Ghaly.

Ag Ghaly, the key figure in the jihadists&39; operation to take control of much of the north of the country in 2012, leads the Group to Support Islam and Muslims (GSIM), formed from a merger of several militant groups.

Turnout -- which has never gone above 50 percent in a presidential election first round since the advent of democracy in 1992 -- was low in the morning.

"The opening went well but there are not enough people yet," said Oumar Camara, a polling station chief in Bamako, blaming morning rains and adding that "in the middle of the day people should come en masse to vote."

Keita&39;s challengers are headed by Cisse, 68, a former finance and economy minister, who lost by a large margin in the second round of the 2013 election.

His team have warned of possible fraud, claiming that there are two electoral lists and hundreds of fake polling stations.

The first poll results are expected within 48 hours, with official outcome following on Friday at the latest.

If no candidate gains more than 50 percent of the vote in Sunday&39;s first round, a second round will take place on August 12.