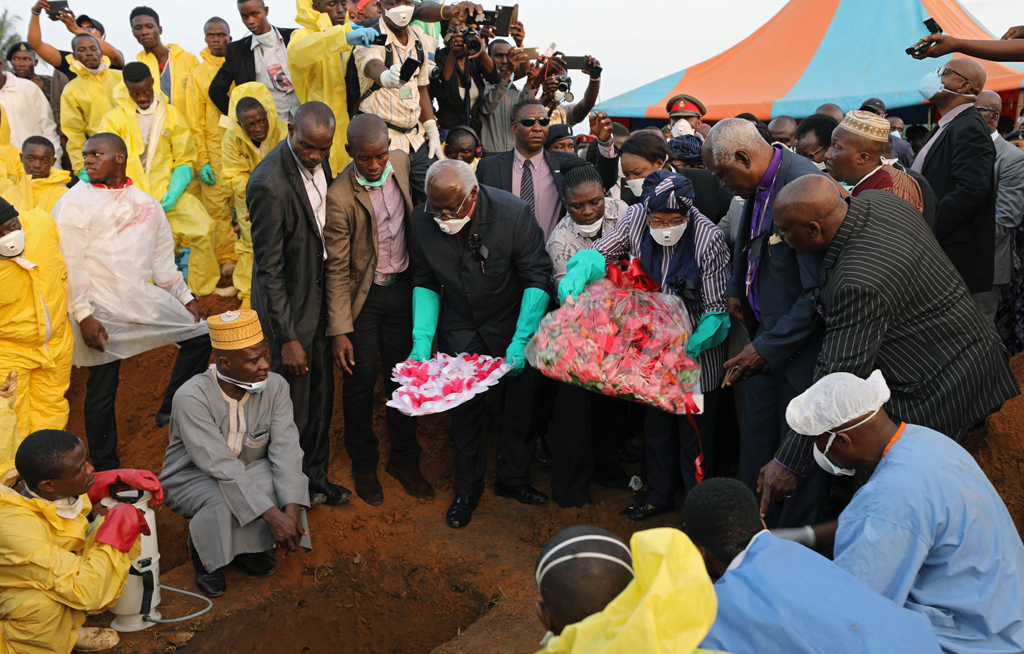 Sierra Leone President Ernest Koroma joined by Liberian President Ellen Johnson Sirleaf during the burial of victims of the mudslide at the Paloko cemetery, in Waterloo, Sierra Leone August 17, 2017.

FREETOWN - Sierra Leone buried at least 300 victims of devastating floods on Thursday, as fears grew of more mudslides and accusations of government "inaction" over deforestation and poor urban planning mounted.

With the aim of clearing the overflowing central morgue, burials began around 1800 GMT in Waterloo, a nearby town where many victims of the Ebola crisis that hit the nation in 2014 were also laid to rest, according to a morgue official and an AFP journalist at the scene.

President Ernest Bai Koroma was accompanied by Liberian President Ellen Johnson Sirleaf, whose nation also lost thousands to Ebola, both wearing surgical masks as the decomposing bodies were put into the ground.

More than 100 of the dead are children.

"We will not bury our hopes," Koroma told mourners. "Sierra Leone will rise again."

On a day of mourning, a Red Cross official warned that smaller mudslides had occurred since Monday in eastern Freetown and in Sierra Leone's second city of Bo, with the rainy season far from over.

"There is a fear that more trouble is imminent," in Freetown, a coastal city of around one million people, said Adbul Nasir of the International Red Cross.

Adding to the danger, the Office of National Security, which is coordinating the government's response, was informed that a mountain which partially collapsed on Monday had cracked at another point.

I join the people of #SierraLeone in mourning those lost in the recent mudslides. Read my full statement here: https://t.co/ik7LH7emeC pic.twitter.com/jHkTxkXVqr

Although the death toll is officially 300, rescue workers privately agree the toll is far higher, and one told AFP that in line with an unofficial morgue toll, 400 graves had been dug for the victims, who will be buried over a two-day period.

The UN has said 4,000 people are affected by the mudslides and flooding.

Idalia Amaya, an emergency response coordinator for Catholic Relief Services in Freetown, said some families hit by Ebola would now be burying loved ones killed in the floods.

"People are going through a complicated grieving process... first Ebola, now the mudslides," she told AFP.

No place to sleep

The disaster began on Monday when heavy rains hit the city and the partial collapse of a hillside triggered mudslides, engulfing homes and wreaking destruction.

Sierra Leone hit by fierce storms causing mudslides and flooding; at least 300 people are dead and 600 are missing. https://t.co/ha18dak0ZI pic.twitter.com/lNoZJ4Kdx4

Citizens and experts alike have questioned why Koroma's government has not done more to tackle illegal construction in the overcrowded capital of Freetown.

For the thousands of survivors left homeless, UN agencies distributed food and hygiene kits to those sheltering in government centres and in the homes of neighbours and family members.

The UN Office for the Coordination of Humanitarian Affairs (OCHA) said 3D mapping of affected neighbourhoods was taking place around Sugar Loaf mountain, which partially collapsed on Monday, and said voluntary evacuations may extend to more areas, potentially increasing the number of displaced.

"We have no place now to sleep, only in a neighbour's house," said Abdul Bendu, in the Pentagon community, which sits directly below the devastated hilltop village of Regent.

UNICEF called the damage "unprecedented" on Thursday and warned children were at risk, while the UN humanitarian affairs office said four registration centres for unaccompanied minors had been established.

Others began to ask why such a tragedy was allowed to happen in the first place, given the clockwork regularity of annual flooding in Freetown.

Amnesty International said the mudslides "grimly illustrate the human cost of the government's failure to implement housing and land policies," in a statement on Thursday.

In recent years, trees have been cut down from the Western peninsular forest on Freetown's limits, with everything from shacks to mansions springing up on the slopes.

Jamie Hitchen, an expert with the Africa Research Institute, told AFP that poor urban planning had been a problem for years, but that the government response had "broadly been one of inaction".

"Particularly in the areas around Regent, construction of houses illegally is being undertaken at all levels of society with impunity," he said in an email to AFP.

Identifying deficiencies in waste management, preventing deforestation, urban planning and the provision of decent housing, Hitchen said "a problem of politics" meant that the city's drains were blocked and dump sites were full.

"There is no urban planning to speak of in the city," he added.

The government has said that in the light of the catastrophe, "relocation and opening up of a new settlement around the Freetown peninsula" would be considered, but similar measures have failed in the past as people seek to live close to the city centre for work.

Hull, a British city which is twinned with Freetown, has launched its own aid appeal, joining foreign governments including in Guinea, Israel, Liberia, Senegal and the EU in sending food and cash to the stricken city.