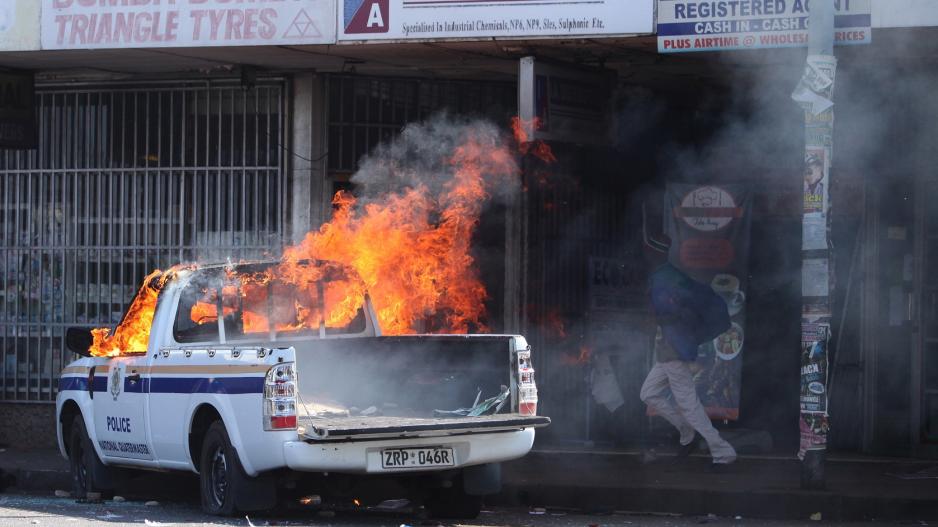 A man runs past a zimbabwean police car set on fire, allegedly by Zimbabwe Opposition Party Movement for Democratic Change Tsvangirai faction (MDC-T) supporters during clash with police during a march against police brutality on August 24, 2016 in Harare.

HARARE – The opposition MDC-T in Zimbabwe has rubbished claims that it is training terror squads to destabilise the country, saying it was a lawful and peace-loving social democratic party.

In a statement issued on Monday, the party, led by former Prime Minister Morgan Tsvangirai, said reports in the government-controlled Sunday Mail were not only untrue but extremely offensive and disturbing and should be dismissed with contempt and disdain.

“The MDC would like to call upon the Zanu PF-controlled media to immediately desist from peddling lies and falsehoods that are wickedly meant to portray the MDC as a violent, terrorist organisation. As the fourth estate, the media should, at all times, report facts and desist from fabricating malicious, false and defamatory stories against President Morgan Tsvangirai in particular, and other opposition political leaders in general,” the party said in a statement.

The party said it had been the victim of sustained state-sponsored violence, thuggery and banditry over the last few years, with its leader, Tsvangirai, and other opposition political parties being brutally assaulted by rogue intelligence officers and the police.

The party said it had no intention to remove the current government through unconstitutional means, adding that the MDC-T was in agreement with President Robert Mugabe that there would not be an Arab spring in Zimbabwe.

The MDC-T blamed Zanu PF for burning two vehicles, belonging to the Zimbabwe Broadcasting Corporation and the Zimbabwe Republic Police, during demonstrations by the party’s youths last
Wednesday.