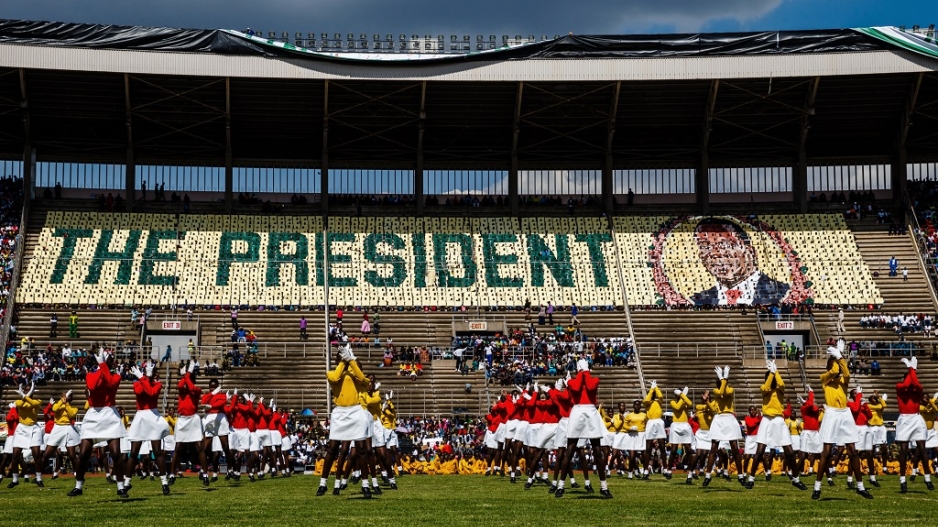 File: The portrait of Zimbabwe's President Emmerson Mnangagwa is displayed as school children perform during Independence Day celebrations at the National Sports Stadium on April 18, 2018 in Harare.

HARARE - Zimbabweans President Emmerson Mnangagwa called on Friday for his ruling Zanu-PF party to appeal "humbly" for votes as he launched his campaign for elections expected in July.

The election will be the first without Robert Mugabe in power since the country won independence from Britain in 1980.

Mnangagwa took over in November 2017 after Mugabe, now 94, was forced out of office when the military briefly took over.

Previous elections in Zimbabwe have been marred by electoral fraud, intimidation and violence, including the killing of scores of opposition supporters in 2008.

"I appeal to my fellow candidates to go out humbly and canvas for the votes," Mnangagwa told thousands of provincial party representatives at the campaign launch in Harare.

Mnangagwa, 75, has repeatedly pledged to hold free and fair elections as he seeks to mend international relations. But he has also been accused of involvement in Zanu-PF&39;s past record of election violence.

He is a veteran party loyalist who served as Mugabe&39;s deputy until he was sacked shortly before Mugabe was ousted.

Mnangagwa and Zanu-PF will take on the main opposition Movement for Democratic Change (MDC), now led by Nelson Chamisa following the death of Morgan Tsvangirai in February.

Massive banners at the venue proclaimed Mnangagwa as "the leader who cares for all his people".

The party handed all-terrain vehicles to each candidate in all 210 constituencies as well as party regalia such as caps, scarfs and shirts decorated with Mnangagwa’s portrait and signature.

Takavafira Zhou, a political scientist at Masvingo State University, said Zanu-PF offered little that was new for voters despite the fall of Mugabe.

"You cannot expect solutions from the very people who created the problems," he said.