Mnangagwa says Zimbabwe 'has moved on' from Mugabe era 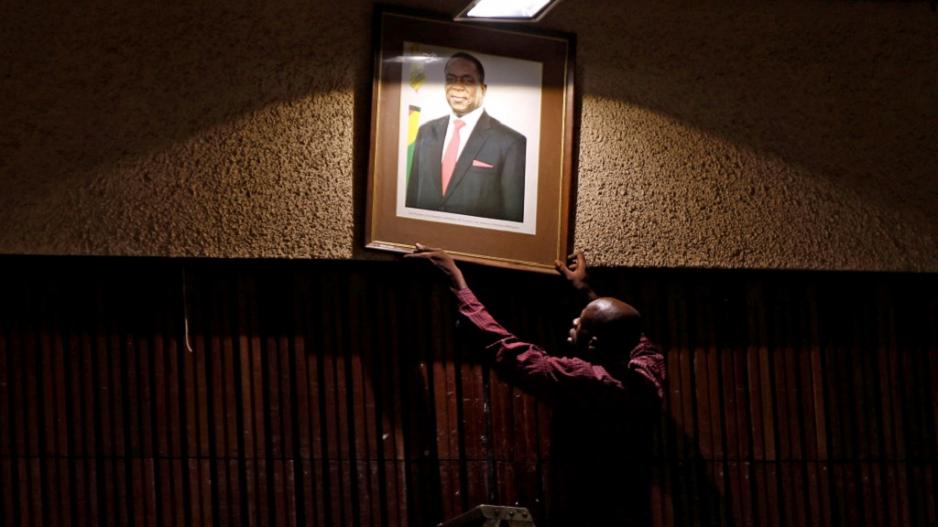 An official puts up a portrait of Zimbabwes President Emmerson Mnangagwa ahead of a meeting of the ZANU-PF central committee in downtown Harare, Zimbabwe, 14 December 2017.

HARARE - Zimbabwean President Emmerson Mnangagwa said on  Friday that the country "has moved on" in response to claims by former president Robert Mugabe that he was ousted in an illegal coup d&39;etat.

Mnangagwa said in a short statement that he "noted recent remarks made to the media" by Mugabe, who spoke to South African journalists in Harare on Thursday.

It was Mugabe&39;s first public statement since his resignation in November, which was triggered by a brief military takeover and the threat of a no-confidence motion tabled in parliament by his own Zanu-PF party.

"I say it was a coup d&39;etat -- some people have refused to call it a coup d&39;etat," Mugabe, 94, told the SABC, referring to the brief army takeover that led to Mnangagwa assuming power after Mugabe&39;s resignation.

Mnangagwa&39;s brief response, posted on his official Twitter account and bearing the seal of the presidency, added that Mugabe "is entitled to express himself freely, as is the case for any private citizen".

"The nation has moved on. Our focus at this time shall remain on preparing for free, fair and credible elections in 2018."

Mnangagwa, 75, stressed that "the Zimbabwe government continues to honour all its obligations towards the former president&39;s welfare and benefits, as provided for under the Constitution of Zimbabwe".

Mugabe&39;s golden parachute reportedly includes a pension of several thousand dollars a month, a retinue of staff, a fleet of luxury cars and around-the-clock protection detail.

Mugabe told his interviewers he did not hate his successor but alleged that he had "betrayed the whole nation".

He insisted he would not work with Mnangagwa and suggested that his presidency was "illegal" and "unconstitutional".

READ: &39;Panic&39; as Mugabe appears to back new Zim opposition

"People must be chosen in government in a proper way. I&39;m willing to discuss, willing to assist in that process -- but I must be invited," he said.

Gideon Chitanga, an analyst at the Johannesburg-based Political Economy Southern Africa think-tank, said that Mugabe&39;s intervention was significant "coming at a time of elections".

Presidential polls, in which Mnangagwa will face his first major electoral test, are due by the end of August.

Mugabe&39;s media appearance was apparently organised by the new National Patriotic Front (NPF) party, which hopes to unseat Mnangagwa&39;s government in the polls.

In response to a widely shared image of the two, Zanu-PF Youth League supporters chanted "down with Mugabe" at a rally, a rare outburst from the normally disciplined party that Mugabe led for nearly four decades.

The military moved against Mugabe after he sacked his then-deputy and heir-apparent Mnangagwa, seemingly fearing the nonagenarian was grooming his wife, Grace, to succeed him as president.