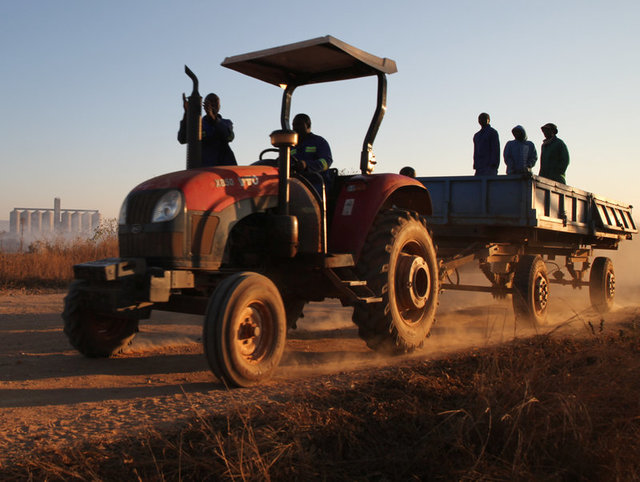 File: Several thousand farmers in the mountain kingdom of Lesotho marched to parliament to protest against regulations forcing them to sell their wool and mohair to a Chinese broker.

The number of people experiencing food insecurity in Africa rose from 220 million people to 224 million people this year. The Food and Agriculture Organisation’s regional overview for the year attributes this to changing weather patterns that led to poor harvests, a loss of livestock, conflict and recurrent droughts.

Food security occurs when all people, at all times, have access to enough food to meet their dietary needs. To declare countries “food secure” analysts look at a combination of availability, access and utilisation.

Mauritius, South Africa, Ghana, Namibia and Senegal are among the top 10 most food-secure countries on the continent. This is attributed to the use of new crops and agricultural production technologies.

But ultimately the ability to achieve food security depends on political will and the effectiveness of government and national strategies in the agricultural and food sector.

Though the 2017 rise in food insecurity is disheartening, some African countries have made progress over the last decade. And there were some initiatives from this year that deserve a special mention for the precedents they set.

In Ethiopia, for instance, farmers increased wheat yields by 14 percent as a result of newer agricultural technologies.

In Nigeria, increased agricultural productivity was linked to the use of smart and affordable tractors by smallholder farmers.

And in Kenya, the practice of conservation agriculture has taken root, resulting in bigger yields.

Equally important are the growing number of innovations in financing. To improve productivity, and achieve food security, farmers must be able to invest in technology.

But, many African farmers live below the poverty line. They can rarely borrow from formal financial institutions as they don’t have collateral. Today, only 6 percent of total bank credit on the continent goes to agriculture.

Tanzania addressed this challenge by rolling out a toolkit that allows farmers to pre-pay for discounted agricultural inputs using mobile money. Farmers are also provided with customised plans that guide them on how to maximise crop yields.

This year several African countries strengthened and launched new agricultural policies. These play a key role in improving food security. For example, policies can lower the cost of agricultural input prices by introducing subsidies. Or they can allocate resources in a way that benefit farmers – like road construction for market access.

The Nigerian government deserves mention for some key initiatives it introduced this year.

For starters, it launched the National Policy on Food and Nutrition, which allocated 92 billion naira (R3.1-billion) to the agricultural sector. Policies were also enacted that gave farmers access to agricultural inputs and provided them with modern equipment at subsidised prices. One example is a fertiliser initiative that delivered over four million bags of fertiliser to farmers at affordable prices. This meant more farmers could buy fertiliser, giving them bigger yields.

Only 7 percent of Africa is irrigated. In Nigeria’s case, the potential irrigable area is 21 million hectares (about the size of Italy) – with only 200,000 hectares currently irrigated.

This year the Nigerian government completed irrigation projects covering over 33,000 hectares of land.

And things are set to improve even further following a World Bank announcement that it’s investing $495-million (R6.1-billion) in irrigation.

In Rwanda, the government has made a commitment to intensify irrigation initiatives to help citizens cope with climate change. Over 44,000ha of land would be developed with formal irrigation infrastructure – that’s about 82,000 football fields.

In Malawi, the government launched a similar initiative which would put over 100,000 hectares of land across the country under irrigation – about 187,000 football fields.

So, even though the number of food insecure in Africa has risen this year, discovering effective new technologies and policies that work is important for the future. This year, these gains were in targeted government interventions and the adoption of modern agricultural technologies. This allowed farmers to improve productivity, allowing African countries to make progress in the quest to attain food security.