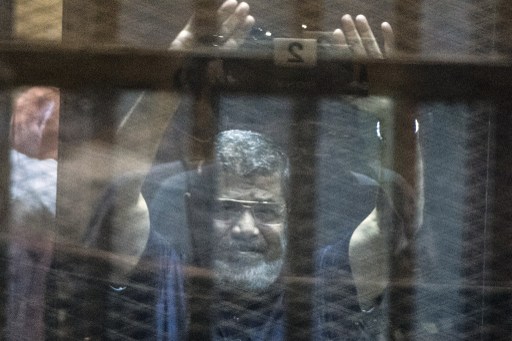 Egypt's deposed Islamist president Mohamed Morsi raises his hands from behind the defendant's cage as the judge reads out his verdict sentencing him and more than 100 other defendants to death.

CAIRO – Egypt’s deposed Islamist president Mohammed Morsi has been sentenced to three years in prison on charges of insulting the judiciary, state television reported on its website.

The Cairo Criminal Court, which has issued the sentence, convicted Morsi of defaming the judiciary in a public speech he made more than four years ago “with the aim of spreading hate,” the report said.

The ruling can be appealed.

In 2013, Morsi, when he was in office, accused in a televised speech a judge of overseeing fraud in previous elections.

Morsi, Egypt’s first democratically elected president, was toppled by the army in mid-2013 following mass protests against his rule.

He has been tried in several different cases since his ouster.