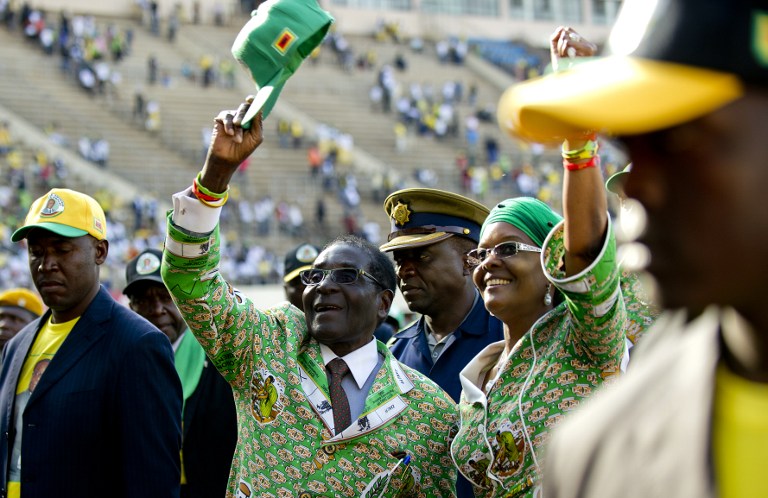 Zimbabwe's President Robert Mugabe (C) greets his supporters alongside his wife Grace after his address at a rally in Harare on July 28, 2013.

HARARE - Zimbabwean President Robert Mugabe&39;s allies declared Thursday that the veteran leader had romped to an election victory, a claim rejected by his rival who branded the vote a "sham."

A top member of Mugabe&39;s ZANU-PF party told AFP that Mugabe had trounced Morgan Tsvangirai and his Movement for Democratic Change in Wednesday&39;s presidential and parliamentary elections.
"We have romped (to victory) in a very emphatic manner," said the party member who asked not to be named. "We have won all of them, including the presidential and parliamentary."
But the claim was swiftly slapped down by Tsvangirai, bidding for a third time to end 89-year-old Mugabe&39;s 33-year rule of the troubled southern African country.
"It&39;s a sham election that does not reflect the will of the people," he said, pointing to a litany of alleged irregularities.
"In our view this election is null and void," he added. "This election has been a huge farce."
"The shoddy manner in which it has been conducted and the consequent illegitimacy of the result will plunge this country into a serious crisis."
SADC to give verdict on Friday
The Zimbabwe Electoral Commission said the count has been completed and results are now being collated from the first vote since bloody polls in 2008 led to an uneasy power-sharing deal between Tsvangirai and Mugabe.
Tsvangirai stopped short of claiming victory himself, a move that could have enflamed tensions in a country where political violence is common.
The vote itself passed off peacefully, but in a sign of simmering tensions around 20 riot police were deployed near the headquarters of Tsvangirai&39;s MDC party, an AFP reporter witnessed.
Foreign diplomats and independent Zimbabwean election observers also expressed grave misgivings about the conduct of the poll.
"Up to a million voters were disenfranchised," said Solomon Zwana the chairman of Zimbabwe Election Support Network, which has 7,000 observers. "The election is seriously compromised."
The Catholic Church -- which has 3,000 people on the ground -- said it was premature to call a winner but there was a "strong feeling" across the country that Mugabe would lose.
"If certain people feel their choice was not accepted they may resort to violence. That potential is still there," a church spokesman said.
The African Union, which has been accused of whitewashing problems in the run-up to the vote, said initial reports indicated it was "peaceful, orderly, free and fair".
Since no Western groups were allowed to monitor the polls, the view of observers from the Southern African Development Community (SADC) may now be pivotal in deciding how  the international community reacts.
The SADC said it will deliver its verdict on Friday.
After years of international sanctions there had been hopes that a free election would allow Zimbabwe to reset relations with the West.
Turnout was reported to be high, with many of the 6.4 million eligible voters queueing before sunrise in the winter cold, hours before polls opened. The lines continued well into the evening, with many marking their ballots by candle light.
Mugabe, Africa&39;s oldest leader, is seeking a seventh term but Tsvangirai has voiced hope the election will usher in a new era.
Final results are expected within five days of the election and police had warned that anyone trying to release unofficial figures ahead of time risked being arrested.
Mugabe himself had even threatened to arrest Tsvangirai if he tried to declare an early victory.
On Tuesday the firebrand had vowed to step down if Tsvangirai was the victor, saying: "If you lose you must surrender."
Mugabe came to prominence as a hero of Africa&39;s liberation movement, guiding Zimbabwe to independence in 1980 from Britain and white minority rule.
But his military-backed rule has been marked by a series of violent crackdowns, economic crises and suspect elections that have brought international sanctions and made him a pariah in the West.
As the economy recovers from a crisis that saw mass unemployment and galloping inflation, Mugabe loyalists insist their hero is "tried and tested" and dismiss concerns about his age.
Mugabe had focused his campaign on attacking homosexuals and on promises to widen the redistribution of wealth to poor black Zimbabweans.
Tsvangirai himself had predicted the MDC would win "quite resoundingly".
The 61-year-old former union boss won the first round of voting in 2008, but was forced out of the race after 200 of his supporters were killed and thousands more injured in suspected state-backed attacks.
Tsvangirai hoped his plans to lure back foreign investors, create a million jobs in five years and improve public services would deliver a long-awaited victory.
But some analysts had cautioned against interpreting high urban turnout as a sign Tsvangirai would sweep the election -- in which the victor needs more than 50 percent to avoid a second round.
"This election is going to be decided in the rural areas," where two thirds of Zimbabweans live and where Mugabe enjoys strong support, said Michael Bratton, founder of pollsters Afrobarometer.
(UPDATES with end of vote count, SADC to deliver verdict Friday)