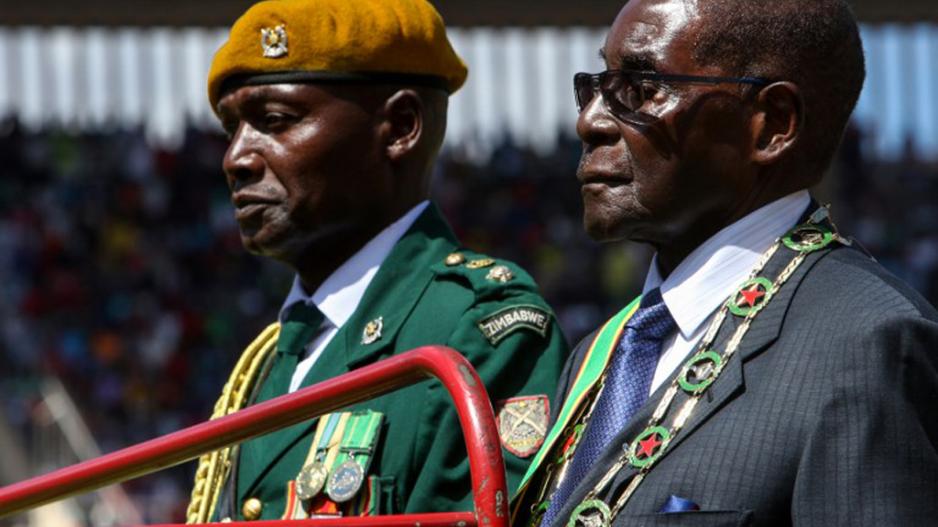 Zimbabwe President Robert Mugabe inspects the guard of honour during a ceremony marking the country's 36th independence anniversary, at the sports stadium in Harare, on April 18, 2016.

HARARE – Zimbabwe’s 92-year-old President Robert Mugabe has labelled liberation war fighters as “dissidents” and threatened to deal with them the same way he did during the “Gukurahundi” – the anti-dissident armed response.
Shona for “the early rain which washes away the chaff before the spring rains”, the Gukurahundi massacres saw an estimated 20,000 Ndebeles killed by the Zimbabwe army’s notorious Fifth Brigade in the 1980s.
Addressing a Zanu-PF central committee meeting at the party headquarters in Harare on Thursday, Mugabe said the Zimbabwe National Liberation War Veterans Association (ZNLWVA) was formed to cater for the welfare of the former freedom fighters and not to champion the political struggle in the country.
Mugabe said the war veterans had no mandate to decide who should succeed him or who should not.
The nonagenarian said Zanu-PF should lead the war veterans and not vice-versa.
“It is not proper for anyone to use this welfare body as a platform that is used to attack the top leadership or seeking to direct party processes in a certain direction preferred by some individuals within that body; to do so will once again, amount to going the way of the dissidents,” Mugabe declared.
The 92-year-old leader said war veterans should speak through party structures. He warned he would deal with those that failed to toe the party line.
“The association was never formed to be the bully of the party nor the entity to make the choices of who should lead and who should not, never ever, except within the people, within the party,” said Mugabe.
“The dissidents tried it, they were war veterans, and you know what happened … lots of trouble, lots of fighting, lots of suffering caused to our people.”
Muagbe, who has been in power for 36 years, said the unity accord signed between him and the late Vice President Joshua Nkomo was not only for ordinary people, but also for the war veterans, adding they should work in harmony with the party structures.
“It was to bring an end to the war that the dissidents had decided to wage. Do we see another rise of dissident activity, well the leadership will say no. No to the war veterans&39; association … it is not your function,” said Mugabe, who has made it public that he intends to stand for re-election in 2018.
“It is not your business to talk of who shall succeed the president. And worse still; and I am stunned, to threaten that unless what you do, your wish is fulfilled there shall be bloodshed.
“What is this discord now that we hear from certain quarters, war veterans association leadership? We say no and a big no. The hallmark of a trained cadre is discipline, impeccable discipline, obedience. The hallmark of a trained cadre is steadfast knowledge of the party line.”
Mugabe, who frowns of any talk of succession, said the war veterans should be guided by the rules of Zanu-PF and must respect those in positions of authority in the party.
It is widely believed that the war veterans are backing vice president, Emmerson Mnangagwa, to succeed Mugabe.
“We do not wish to be at odds with young people who were with us yesterday as we fought for our independence. Alongside their peers they made sacrifices we recognise and appreciate,” said Mugabe.
“The youth took positions which must be praised by all our people, but by the same token, just as so much is owed them by our party and our nation, so much is expected of them by the same party and nation that readily applaud their contribution,” he said.
The party, he said, had organs and platforms from the war veterans should air all their grievances.