Mugabe: No Arab Spring in Zim 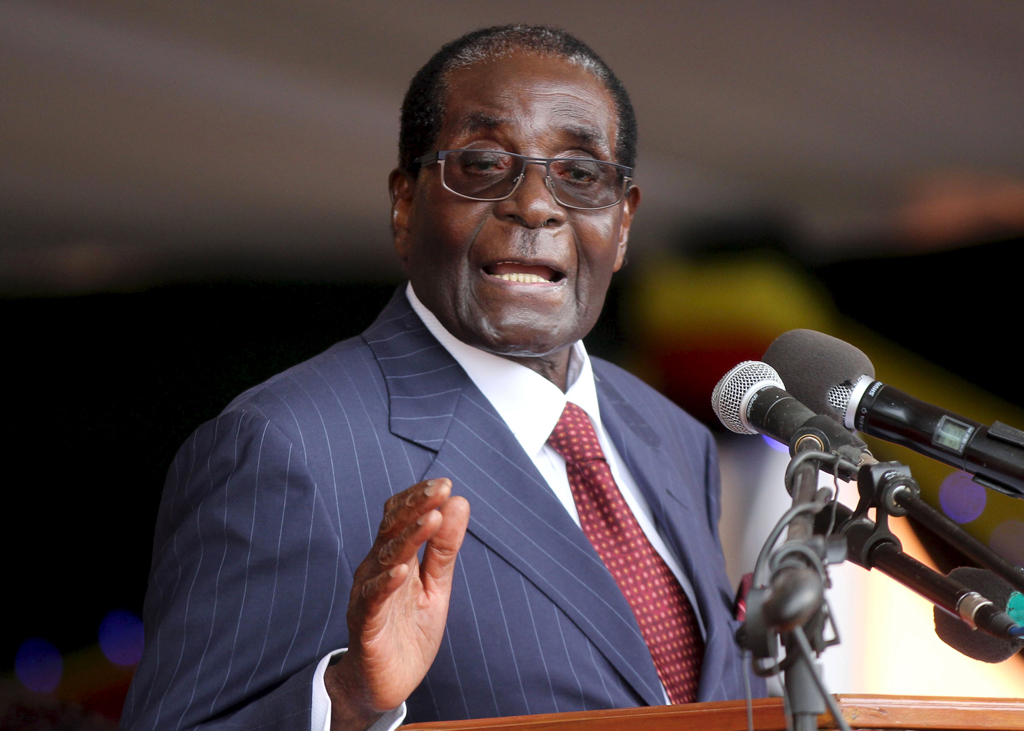 HARARE – Zimbabwe&39;s President Robert Mugabe on Friday warned that the Arab Spring style of protests would fall flat in Zimbabwe after police fired teargas and beat up protesters staging the latest of a string of highly charged demonstrations.

Dozens of police blocked off the site of the opposition rally for electoral reforms by 2018, when 92-year-old Mugabe who has ruled the southern African country for decades will seek re-election.

The protesters responded to the clampdown by throwing stones at the police while some set tyres ablaze and others pulled down the sign for a street named after Mugabe.

"They are burning types in the streets in order to get into power. They are thinking that what happened in the Arab Spring is going to happen in this country, but we tell them that is not going to happen here," said Mugabe in remarks broadcast by state television.

ZIMBABWE - Opposition supporters during a protest march for electoral reforms in Harare. By @ZinyangePhoto @AFPphoto pic.twitter.com/az8vIxB3KG

"What politics is that when you burn tyres? We want peace in the country," said Mugabe accusing foreign powers of having a hand in the unrest.

AFP correspondents saw armed police firing tear gas and water cannon at protesters gathered on the fringes of the central business district who were waiting for the march to start.

Some people caught up in the melee, including children going to a nearby agricultural show, ran for shelter in the magistrate&39;s court while riot police pursued the protesters and threatened journalists covering the rally.

The usually-bustling pavements were clear of street hawkers and some shops were shut, as rocks, sticks and burning tyres were strewn across the streets.

Opposition protesters also clashed with supporters of the ruling ZANU-PF party who had refused to clear their street stalls.

ZANU-PF youths hurled stones at the opposition activists but were overpowered and their stalls set on fire.

The march was organised by 18 opposition parties including the Movement for Democratic Change led by Morgan Tsvangirai and the Zimbabwe People First formed this year by former vice president Joice Mujuru.

Opposition leaders condemned the brutal repression of the protest and vowed to increase pressure on Mugabe&39;s regime.

"If that was meant to cow us from demonstrating, I want to say we are going to do the same next week Friday," former Mugabe ally and ex-cabinet minister Didymus Mutasa told reporters.

Protests "will continue until the day we vote", said Mutasa, a former top member of ZANU-PF who is now a senior member of Mujuru&39;s party.

"We have had enough of ZANU-PF misrule."

Tsvangirai said the public would not be easily calmed.

"Today&39;s brutal suppression of the people will not stop them from exercising their rights."

Tsvangirai said the regime was in its "sunset hour", warning that efforts to suppress the protests would backfire.

"Citizens are like a spring: the more they are suppressed, the greater the rebound," he said.

Charles Laurie, an analyst with Verisk Maplecroft in London, agreed that the government was on the verge of losing control.

"The government is nearing a tipping point in its ability to control a population long used to violence and hardship, and who now have little to lose in putting themselves at risk in forcing political concessions," he told AFP.

Police broke up the protest despite a court ordering them not to interfere or disrupt the march.

Authorities said they had arrested 67 people, and lawyers said one of them was a journalist.

Several foreign diplomatic missions based in Harare called on the authorities to ensure that basic human rights and freedoms are respected during policing.

The US embassy expressed "deep concern over reports of violence during some of the protests" and called on government to "exhibit restraint" and respect human rights.

And the Canadian embassy also said it was "increasingly concerned with reports of violence and human rights violations in response to public protest" while the Australian mission said the use of violence was "not acceptable under any circumstance".

Friday&39;s march was to demand free and fair elections. The last elections in 2013 were won by Mugabe in a vote the opposition said was rigged.

Zimbabwe has seen a mounting tide of violent protests in recent weeks, with demonstrators demanding the resignation of Mugabe, who has been in power since 1980.

Under his rule, there has been an economic collapse that has caused food and cash shortages, with the country battling to pay public servants.