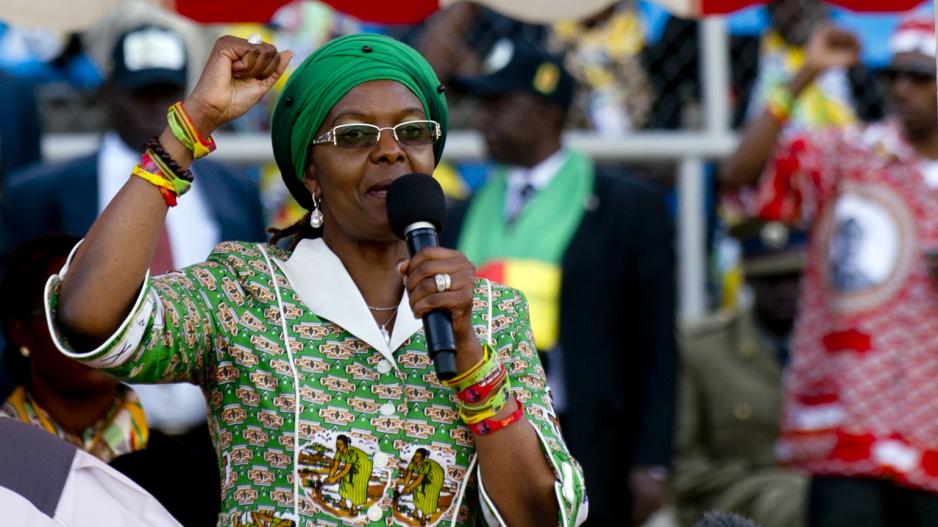 BINDURA – Zimbabwean President Robert Mugabe and his wife, Grace, upped the ante and attacked Vice-President Emmerson Mnangagwa, seemingly pulling the rug from under his feet at a rally held in the mining and agricultural town of Bindura, about 92km north of Harare on Saturday.

The two accused Mugabe’s long-time aide of a host of issues, among them leading factions in the Midlands and Masvingo provinces.

First was Grace, who said the hosting of the rally in Mashonaland Central province, under which Bindura falls, gave them the opportunity to “exorcise demons”.

Grace Mugabe lays into VP Mnangagwa at Bindura rally.Ed told to distance himself from expelled cadres to prove he is loyal to thePresident pic.twitter.com/Iv1QmDXaQO

Mnangagwa and his wife, Auxillia, looked bemused, while Grace accused him of keeping company with “people chased away from the [Zanu PF] party”, asking him not to “interact” with those people if he was “really behind Mugabe”.

“VP Mnangagwa, if you support President Mugabe, why do you keep the company of people who were fired from the party? You are seen with some of the people holding a cup inscribed ‘I am the boss’,” she said.

“I am asking VP Mnangagwa to stop it. I once warned [former vice-president Joice] Mujuru and she didn’t heed my advice. Where is she now?”

Mujuru was chased from Zanu PF at the party’s congress in December 2014 for allegedly plotting to topple Mugabe from power. Before Mujuru was chased away, Grace had hinted during her “meet the people tour” rally at Chipadze Stadium in October 2014, the same venue used on Saturday, that she would “baby-dump” the former VP, who now leads opposition party the National People’s Party.

Dear VP Mnangagwa. Where you aware that your illness would be so deeply revealed to the public? @matigary @BelieveCitizen @cdesetfree pic.twitter.com/HmSAcyM3tr

“Let’s not lie that everything is okay in the party when it’s not,” Grace said on Saturday. “We know everything about you [Mnangagwa], good or bad. Those ministers who don’t want to support Lacoste are framed. [Higher and Tertiary Education Minister] Jonathan Moyo is one victim. There were demonstrations against [Zanu PF national political commissar Saviour] Kasukuwere because he refused to support Lacoste. For those who want factionalism, go to Masvingo or Midlands. Kasukuwere is not going anywhere,” she said.

Lacoste is the name given to a faction reportedly sympathetic to Mnangagwa because of the crocodile shape on the Lacoste perfumes brand. Mnangagwa is nicknamed “Ngwena”, which translated means a crocodile.

Grace on Saturday asked why Mnangagwa kept quiet for a long time while the name of the Mugabe family’s dairy business was being soiled. She said people got sick, but it was wrong for the VP to “manipulate his sickness” for political gains.

Mnangagwa was airlifted to a hospital in South Africa in August with suspected poisoning.

She said her husband was once a victim of food poisoning at a rally in Manicaland and fell sick at the funeral of Senate President Edna Madzongwe’s husband, but “no noise” was made about it.

Mugabe says Mnangagwa's doctor came to brief him at State House. Says they found no evidence of any food poisoning.

“He was sick and thought he was dying. He asked me to call [Defence Miinister Sydney] Sekeramayi so they could talk before he died, but he recovered and we never said anything. I also fell sick after taking food. I lost about 5kg in one night. I was run over by a car, but I did not accuse the driver of being sent by someone,” she said.

Robert Mugabe, who first spoke glowingly about Mnangagwa’s role during the liberation struggle, suddenly changed stance and attacked his deputy, first accusing him of being one of the plotters of the 2004 Tsholotsho declaration before pulling out at the last minute.

Tsholotsho, also called the Dinyane declaration, reportedly had Mnangagwa and Moyo, among other top Zanu PF and civil servants who were allegedly plotting to remove Mugabe from power.

Mugabe said after re-admitting Moyo into the party following years in the wilderness, the now higher education minister had vowed in 2009 that he would never support Mnangagwa after being left hanging out to dry following Dinyane.

“We asked him [Mnangagwa] about Tsholotsho and he professed ignorance. He’s a lawyer and he knows how to defend himself,” he said.

The 93-year-old president also spoke of reports that Mnangagwa had left a rival Godfrey Majonga with a broken spine after giving him two options – sit on a red-hot stove or jump out the window from the second floor of a flat. The incident reportedly occurred in 1987.