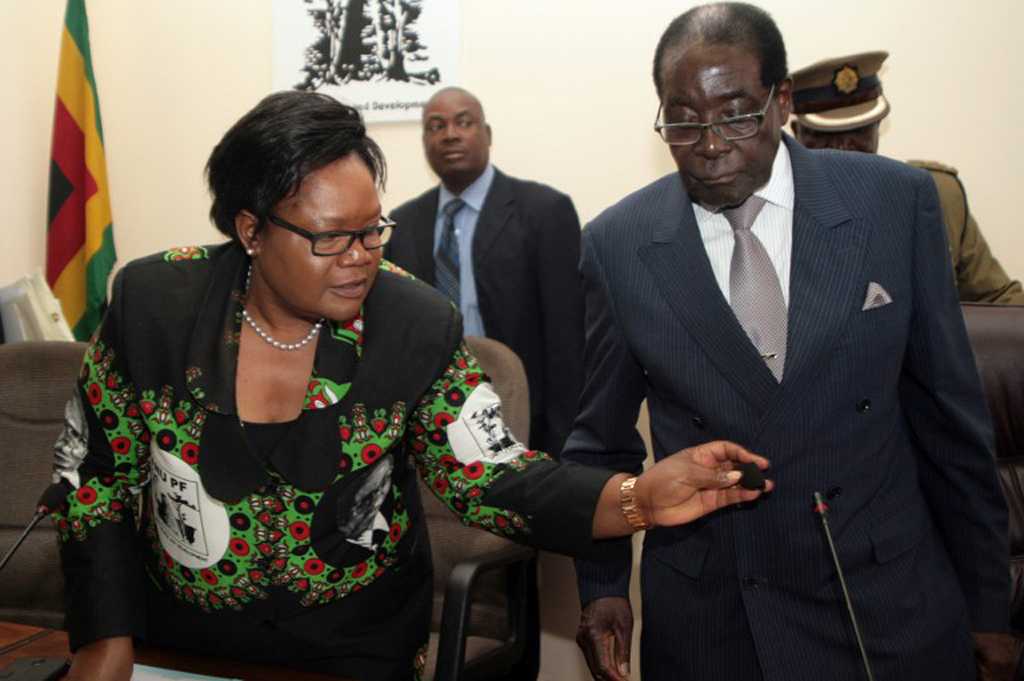 Zimbabwe's President Robert Mugabe (R) and Vice-President Joice Mujuru (L) are seen at a meeting of the ruling ZANU-PF party headquarters on October 24, 2014.

Mujuru, once seen as one of Mugabe&39;s closest allies, was dismissed from her government and ruling party posts in December on charges that she led a cabal that planned to topple Africa&39;s oldest leader. She dismissed the accusations.

On Tuesday she published a Blueprint to Unlock Investment and Leverage for Development (BUILD) - a two-page plan that read like an election manifesto.

"We have been hard at work and I wish to share with you, in brief, how we propose to translate our vision for a better Zimbabwe into reality," Mujuru wrote.

Mujuru, 60, has not formed a political party. But during her her 10 years as Mugabe&39;s deputy, she was seen as a shoe-in to replace Zimbabwe&39;s sole leader since independence from Britain in 1980.

Her policy document comes at a time the main opposition Movement for Democratic Change (MDC) has split and weakened over how to confront Mugabe.

The ruling ZANU-PF party has already chosen Mugabe as its candidate for the 2018 presidentiual poll, when he will be 94.

In the document, Mujuru said a black empowerment law, which forces foreign-owned firms to sell majority shares to locals, would be reviewed to attract investment and help build infrastructure.

Foreign investors often cite the empowerment law as a barrier to investing in the mineral-rich southern African nation, which is struggling to emerge from a catastrophic recession that was marked by hyperinflation and food shortages.

FrontPage So this is what has been cooking in Mujuru&39;s kitchen. Interesting times ahead pic.twitter.com/ybq1FyZRH1

Mujuru said she would push for a free press and a repeal of restrictive media and broadcasting laws that ban private television stations and bar foreign journalists from working permanently in Zimbabwe.

Tough security laws that Mugabe has used against the opposition would also be removed, Mujuru said.

Mujuru, a veteran of Zimbabwe&39;s independence war against white minority rule, declined to comment further when contacted by Reuters. She apologised in June for her past role in Mugabe&39;s government, fuelling speculation she planned to succeed him.

"Let&39;s not assume that it will be plain sailing for her. She will be subject to the usual restrictions and repression as has been the familiar trademark against those who oppose ZANU-PF," said Masunungure.

ZANU-PF spokesman Simon Khaya-Moyo was not immediately available for comment.