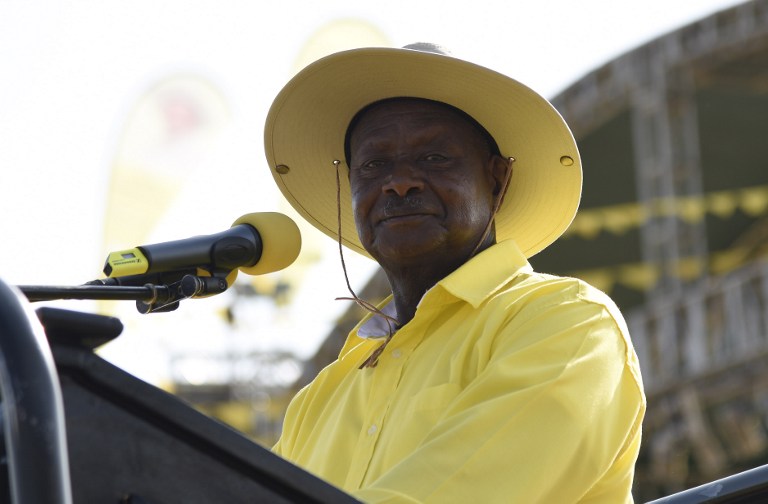 KAMPALA, Uganda - Uganda&39;s President Yoweri Museveni extended his three-decade rule on Saturday after winning a fifth term in polls rejected as fraudulent by his closest rival who was under house arrest.

The veteran 71-year-old won 60 percent of the vote in the sometimes chaotic elections, far ahead of the 35 percent garmered by detained opposition leader Kizza Besigye, whose house was surrounded by dozens of armed police in riot gear.

"The commission declares Yoweri Kaguta Museveni the elected President of the Republic of Uganda," Election Commission chief Badru Kiggundu said as he read out results.

Large numbers of police and troops have been deployed on the streets of the capital Kampala. US Secretary of State John Kerry on Friday urged Museveni to "rein in" his security forces.

"The outcome of an elections can either tear or build a country... as Ugandans let us be prepared to exhibit more tolerance," commission chief Kiggundu said. "We love this country and you Ugandans love your country."

"The result confirmed that our opponents failed to offer any alternative," NRM spokesman Mike Sebalu said. "Behind their vague claims of change, there were no policies and no chance of progress -- and people saw through these empty claims."

"We anticipate that candidates who have won in the elections intended to hold celebratory activities... To protect public order, all candidates planning celebrations must first discuss and get clearance," he said.

The election on Thursday was disrupted in Kampala by the late arrival of ballot boxes and papers and angry demonstrations by voters that the police quelled using tear gas.

At nearly 28,000 other polling centres voting passed off smoothly, but the ballot was extended for a second day in 36 places after delays that Commonwealth election observers called "inexcusable" and that "seriously detracted from the fairness and credibility of the result."

European Union election observers on Saturday said that "voting was conducted in a calm and peaceful environment in the vast majority of the country".  But the observers also voiced criticism over the "lack of transparency and independence" of the electoral commission.

Ex-prime minister Amama Mbabazi, a former ruling party stalwart, was trailing in a distant third with just over one percent of the vote.