New Central African president takes on a country in ruins 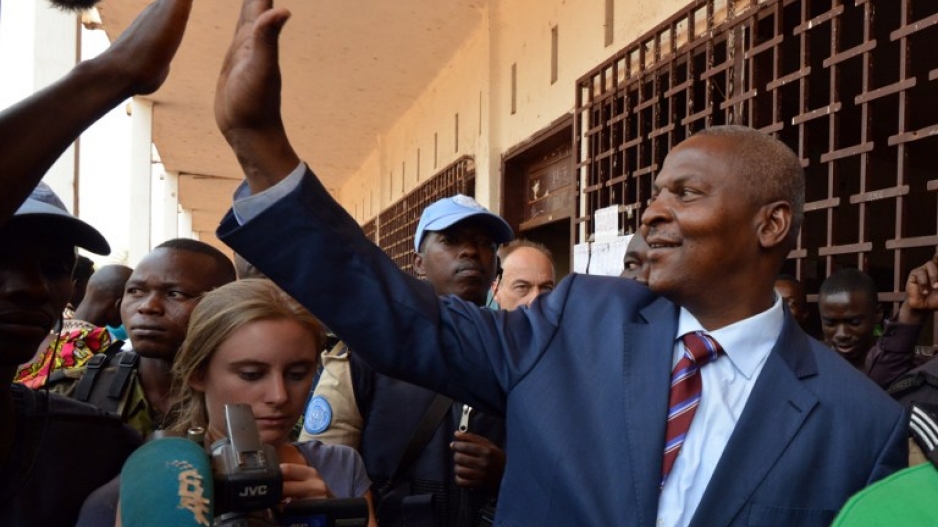 Faustin Archange Touadera greets a supporter after voting in a presidential run-off in which he emerged victorious, at a polling station in Bangui, 14 February, 2016. The Central African Republic's new president is set to take office on March 30, 2016.

Former maths teacher Faustin-Archange Touadera, 58, was the surprise winner of February&39;s run-off election in the country that had been wracked by three years of communal violence.

The spiral of unrest between Muslim and Christian militias has left thousands dead, displaced more than 400,000 and disrupted farming, transport and public services in one of the world&39;s poorest nations.

The violence was so serious that it prompted a military intervention by France -- the former colonial power -- and led to the deployment of a UN peacekeeping force.

Several heads of state and delegations from the region and partners including the UN and France are expected to attend Touadera&39;s swearing-in in the capital Bangui.

The ceremony marks the last stage of the political transition that began after the toppling of Christian former president Francois Bozize in 2013 by a rebellion of the predominantly Muslim Seleka militia.

And though a new president has been elected and a new constitution adopted, the country&39;s parliament is still not in place. The second round of postponed legislative elections is scheduled for Thursday.

The elections came after 93 percent of voters backed a constitutional referendum that cleared the way for the vote.

It also followed Pope Francis&39; groundbreaking trip to the country in November, his first to a war zone, during which he made an impassioned plea for peace and reconciliation.

Immediately after his election Touadera declared he "understood the weight of responsibility" on his shoulders.

Previously prime minister under Bozize between 2008-2013, Touadera will face enormous economic and security pressures from the moment he sets foot in the presidential palace.

Part of his popular appeal stems from a measure he introduced during his time as premier: paying government salaries directly into bank accounts, ending decades of pay arrears and unpaid wages.

But another former prime minister has warned that Touadera faces an uphill struggle raising revenues.

"(The country) remains cut off from its income due to the systematic bleeding of revenue by armed groups that have set themselves up as customs officers, tax officials," said Enoch Derant Lakoue, a presidential candidate.

Central African economist Achille Nzotene added: "It&39;s a balancing act in terms of security, and he must engage in a titanic economic recovery effort."

And if he fails, "returning to square one will be fatal".

Like his predecessors, Touadera will be largely dependent on the international community to underwrite the finances and security of his government.

But despite the challenges, Touadera takes office with a strong mandate having secured almost 63 percent of the vote despite not being among the favourites at the start of the campaign.

"Touadera is the candidate of the people... and is already a considerable asset for the reconstruction of the country," said Muriele Nzondo, a Bangui shopkeeper.

But despite his obvious popularity, many consider him at least partially responsible for the failings of the Bozize era.

Student Euloge Ngate Linzonzo said: "It is true that he has the people with him, but not all of them. He is responsible for the management of the Bozize regime that threw the country into chaos through its inaction.

"We can&39;t be sure today that he&39;ll have a firm enough hand to deal with the militias that have sown terror."