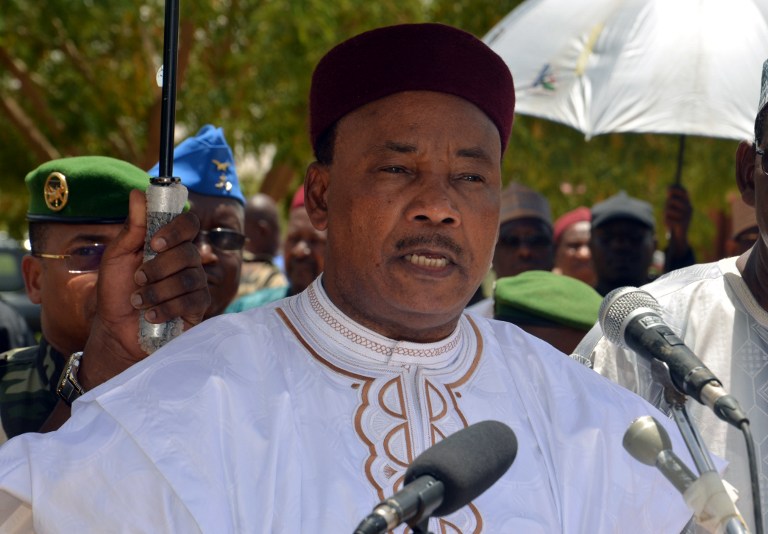 File: Niger President Mahamadou Issoufou, speaks as he visits an army base on May 27, 2013 in Agadez, northern Niger.

NIAMEY - Niger's President Mahamadou Issoufou said Saturday that he would not amend the constitution to allow him to seek a third term after his second and final mandate ends in 2021.

"One of my greatest ambitions is to organise free and transparent elections in 2021 and pass the baton to another Nigerien whom the Nigeriens will have chosen," the president said in an interview on state television on the occasion of the first anniversary of his inauguration for his second mandate on April 2, 2016.

The constitution of Niger limits the president to two terms of five years. Issoufou, 65, was re-elected in March last year following the end of his first term, albeit in elections boycotted by the opposition.

"Me, I am a democrat at heart (...) I don't have the arrogance to think that I am an irreplaceable providential man," the head of state said.

According to Issoufou "Niger needs strong democratic institutions," and for this there needed to be alternations in power.

If he succeeds, he will be the first democratically elected president of of the vast west African country to ensure a peaceful transition of power to a new head of state.

His predecessor Mamadou Tandja was overthrown in 2010 by a military coup for having modified the constitution in order to remain in power at the end of his two legal five-year terms.

Niger, one of the poorest countries in the world but rich in uranium, has never experienced a real democratic transfer of power since its independence in 1960.

The democratic process begun in 1993 has often been interrupted by military coups.

In recent years, Niger has been hit by attacks from Boko Haram Islamists, whose insurgency has spilled over from neighbouring Nigeria, but despite its porous borders the country is an island of stability in a troubled area.