Nigeria facing 'a famine unlike any we have ever seen' 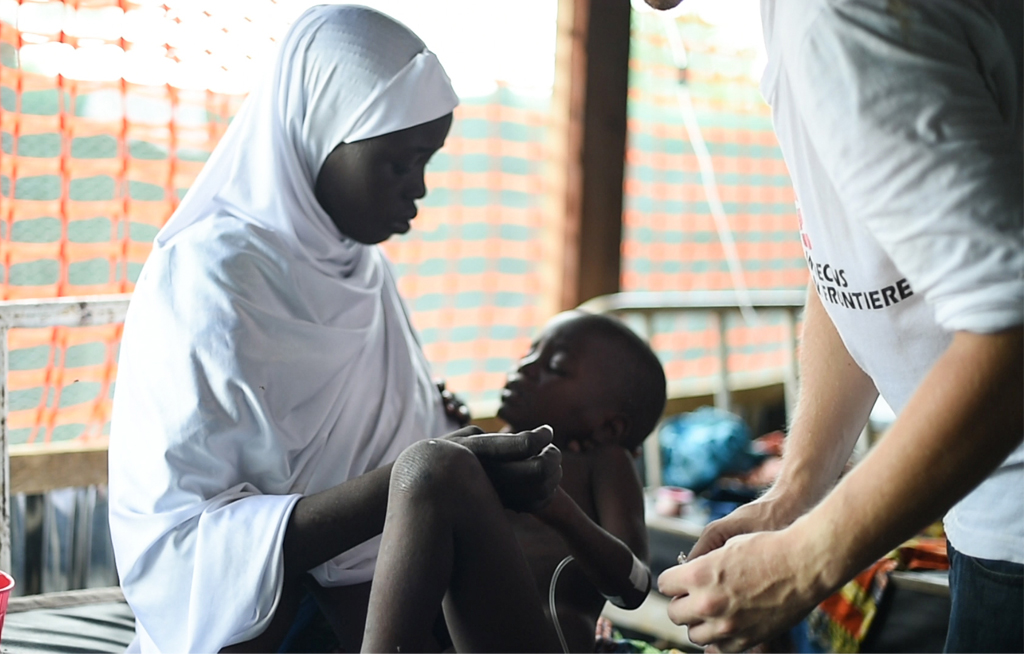 Borno State has been affected by the ongoing conflict in northeast Nigeria. The majority of patients seen, especially children, have presented symptoms of severe acute malnutrition, malaria, diarrhea and other hygiene related diseases.

MAIDUGURI - The whimpers from skeletally thin babies too weak to cry are a harbinger of worse things to come: A quarter of the children lucky enough to make it to this emergency feeding center are dying.

They are the latest victims of Boko Haram’s Islamic insurgency.

No one knows how many more children are dying of starvation in refugee camps and areas too dangerous to access because of the extremists’ presence, according to Doctors Without Borders, which runs the emergency feeding center.

The aid group first sounded the alarm of a humanitarian crisis of “catastrophic” proportion in northeast Nigeria as Boko Haram lost its grip on some areas and its victims began to emerge.

“These are kids that basically have been hungry all their lives, and some are so far gone that they die here in the first 24 hours,” said Jean Stowell, an American midwife in charge of the center in Maiduguri, the biggest city in this largely Muslim region. The 110-bed center has quadrupled in size in recent weeks, but each time it expands it rapidly fills.

Nearly a quarter of a million children are severely malnourished because Boko Haram has disrupted trade and farming, UN Assistant Secretary-General Toby Lanzer warned at a meeting in Brussels on Thursday.

About 2-million people in the region have not been reached, “and we can’t assess their situation. We can estimate that it’s awful.”

With Nigeria in a recession and without speedy outside help, “we will see, I think, a famine unlike any we have ever seen anywhere,” he said.

One million refugees from Boko Haram are crowded into camps in Maiduguri. Outside the camps, fresh produce is cruelly bountiful. Markets are filled with pineapples, oranges, cabbage, green beans, tomatoes and carrots. But most refugees cannot afford them, and Nigeria’s government is investigating reports of officials stealing food aid.

Elsewhere, 1 million children are trapped in areas too dangerous to reach because of Boko Haram, the UN children’s agency estimates. Its effort to reach some of them was put on hold in July when the extremists attacked a military-escorted humanitarian convoy on a major highway and a rocket hit the windshield of an armored car. A UNICEF worker was among three civilians wounded.

Boko Haram has been hostile to Western medicine. A Doctors Without Borders vehicle exploded a land mine on the same road in July; no one was seriously hurt. The organization had just brought the first aid to Bama, the region’s second largest city, where they discovered that six people a day were dying of malnutrition and diarrhea.

Some children who make it out of such areas remain in danger.

PICTURED: A child gets ready for his mother to bathe him in MSF&39;s facility in Maiduguri. The health situation is critical in several cities in Borno State in north-eastern Nigeria, where malnutrition affects a very large number of children. 500,000 to 800,000 people receive very little food and have extremely limited access to medical care. CREDIT: Shaista Aziz/MSF

In the steamy heat inside the feeding center, Hassana Mohammed tried to breastfeed a baby while comforting 18-month-old Yakubu, who was too weak to swallow and was irritated by the intravenous drip that fed him through his nose.

Mohammed’s five children have known little but hunger and fear since Boko Haram killed her first husband when her eldest, 7-year-old Aisha, was just a month old.

“We’ve been on the run ever since, but Boko Haram was never far away,” Mohammed said. “You will see some women dying in the bush during childbirth, and some dying on the way while running because of hunger. Some will run and leave their children for their safety, now many children were left in the bush to die.”

READ: Food aid demand in NE Nigeria could double in a month: UN

The hardest thing now is finding food, she said. When aid workers made it to her refugee camp in Maiduguri, an informal collection of huts made of plastic sheeting and palm leaves, she received four handfuls of rice.

“It’s supposed to last a week, but we run out after just a day or two,” she said.