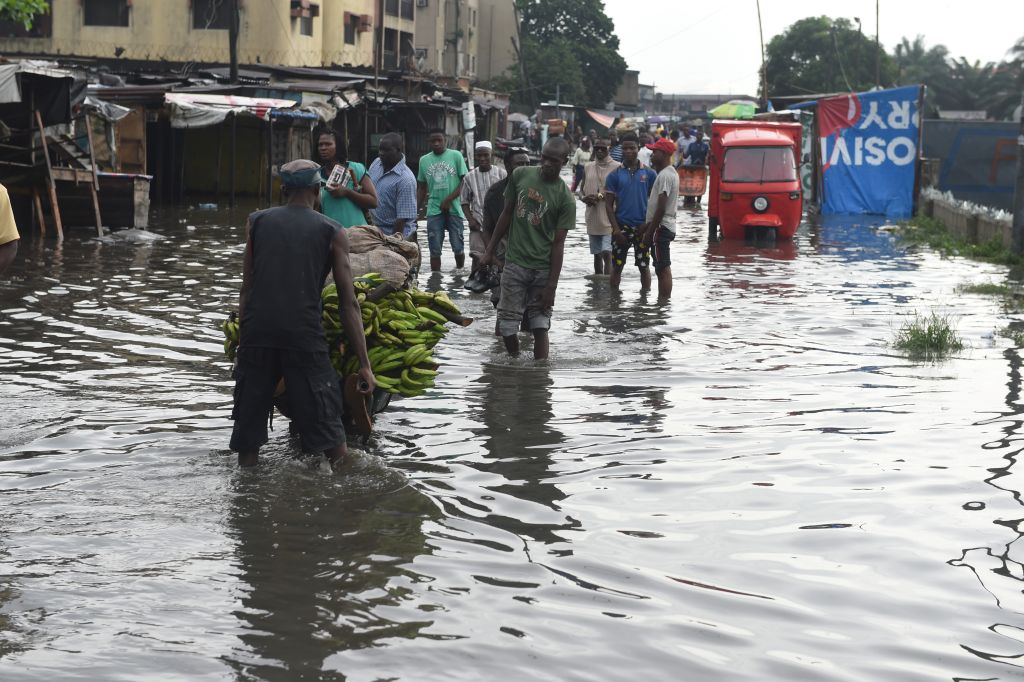 People walk on a flooded road at Okokomaiko in Ojo district of Lagos, on May 31, 2017. A torrential rainfall has left many homes, shops and roads flooded in Lagos, Nigeria's commercial capital.

"I have received with great concern reports of the flooding in Benue State, displacing, from early estimates, more than 100,000 people," Buhari wrote on Twitter.

The over 110,000 residents displaced in 24 communities of Benue State Nigeria by flood needs urgent intervention of the govts and everybody pic.twitter.com/QZ1oeD7fnO

Helen Teghtegh, the head of a local NGO, the Community Links and Human Empowerment Initiative, said the region had been battered by heavy rains over the past two weeks with the level of the Benue river rising.

Many residents in the state capital Makurdi have fled their homes since Wednesday, she added, launching an appeal for donations.

MAP: Deadliest African floods over past two decadesncy services, so we should know better," she said.

RT @onyeka60: What is the FG doing about this Benue flood??No media outlet in Nigeria is trending this @Gidi_Traffic pic.twitter.com/EBaQPeZvVq

Photographs of inundated Makurdi began spreading on social media Thursday, showing cars and thousands of homes completely submurged. Others showed men and women carrying mattresses, bags and other belongings as they fled on foot.

Buhari said he had called for the National Emergency Management Agency to step in, following criticism in the media of authorities' inaction in tackling the flooding.

Two camps have been set up in Makurdi to accommodate those made homeless, but they were not set to open before the weekend.

Our thoughts and prayers are with the 100k people affected by the flood in Makurdi, Benue State, Nigeria. #RemainStrong #PrayForMakurdi -- pic.twitter.com/IHSw0DCZlw

Benue state, which is heavily reliant on its agricultural sector, has suffered repeated floods in recent years, caused by heavy rains and the opening of dams in neighbouring Cameroon.

In 2012, Nigeria suffered disastrous floods across 30 of its 36 states. Hundreds of people died, and some two million people were left homeless.