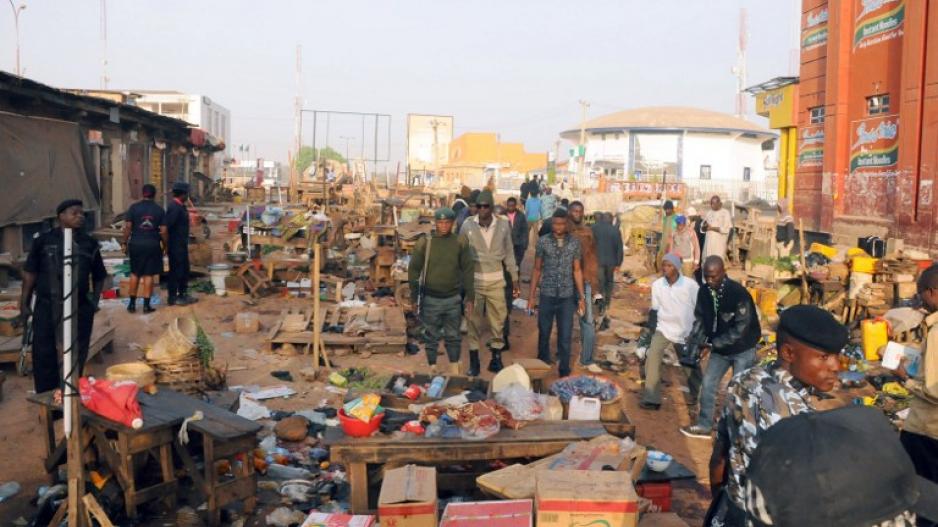 Nigerian security inspect the scene of a bomb blast at the Jos Terminus Market. A double bomb attack that killed 31 people in a crowded market in the central Nigerian city of Jos was likely to have been carried out by Boko Haram, the state government said

All the hostages were rescued in Borno state with 520 recovered in Kusumma village on Tuesday after a confrontation with Boko Haram fighters, and a further 309 from 11 other villages under the Islamist group&39;s control.

"The gallant troops cleared the remnants of the Boko Haram terrorists hibernating in Kala Balge general area," army spokesperson Sani Usman said in a statement, adding that 22 "terrorists" were killed.

Three Islamists were killed and one was captured alive during the second raid on the 11 villages.

The military operations came on the same day that Boko Haram abducted 16 women, including two girls, in neighbouring Adamawa state.

Locals said the hostages were seized in the bush while fetching firewood and fishing in a nearby river under the escort of two civilian vigilantes assisting the military against the Islamist insurgents.

"When the civilian vigilantes escorting the women saw the heavily armed Boko Haram fighters advancing on them they fled, leaving the women to their fate," said Madagali resident Garba Barnabas.

Two women who escaped by jumping into the river and pretending to have drowned later returned to the village to raise the alarm, he added.

Human rights groups have said fighters have kidnapped thousands of women and young girls, including more than 200 schoolgirls who were abducted from the Borno town of Chibok nearly two years ago.

At least 17,000 have been killed since Boko Haram launched an insurgency in 2009 to carve out an Islamic state in northeast Nigeria.

More than 2.6 million people have fled their homes since the start of the violence but some of the internally displaced have returned home after troops began a fight-back last year and recaptured territory.

A regional force involving troops from Nigeria, Chad, Cameroon, Niger and Benin is to deploy to fight the Islamists.