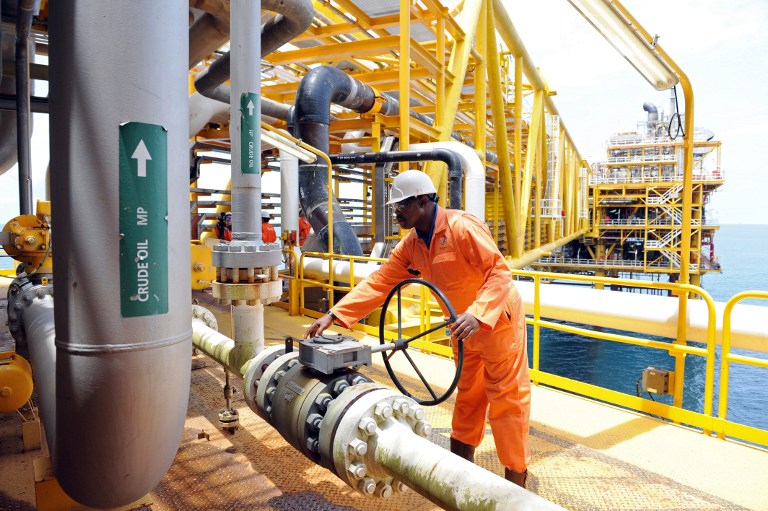 A worker inspect facilities on an upstream oil drilling platform at the Total oil platform at Amenem, 35 kilometers away from Port Harcourt in the Niger Delta.

LAGOS - Nigeria lost about $1.2 billion to oil thieves in a single month of the first quarter of 2013.

President Goodluck Jonathan&39;s special adviser on oil-rich Niger Delta, Kingsley Kuku said: "At average January-March prices of $121 per barrel, this theft resulted in a loss of $1.2bn to Nigeria in one month alone."

Official figures indicate that the trade in stolen oil led to a 17 percent fall in official oil sales in the first quarter of 2013, estimated at 400,000 barrels per day, it said.

In July, the International Energy Agency said the theft of oil from pipelines in Nigeria had damaged infrastructure, and was one factor in a fall of output by the Organization of the Petroleum Exporting Countries (OPEC) of which Nigeria is a member.

Such theft involves thieves tapping pipelines to syphon crude for sale on the lucrative black market.

It often leads to explosions, fires and oil pollution.

Kuku said that his office would organise a conference in Lagos on oil theft and sea piracy in the Niger Delta.

Recent reports have indicated that Nigeria, which produces around two million barrels of oil, loses about $6 billion annually in revenue from oil theft.

The temporary closure is estimated to cost, in production terms, 150,000 barrels per day, the statement said.

The one-day conference will discuss "the complexities of illegal oil bunkering (theft)... and sea piracy with a view to rethinking the existing mechanisms to eradicate these negative incidences that have been haemorrhaging the nation&39;s oil resources," the statement said.

The Gulf of Guinea, which includes the waters of Benin, Nigeria and Togo is an emerging piracy hub, with gunmen frequently targeting oil ships both to steal crude and seize foreign hostages in order to get ransom payments.

Dozens of foreign sailors have been kidnapped in southern Nigerian in the past three years, and later freed after ransom payments.