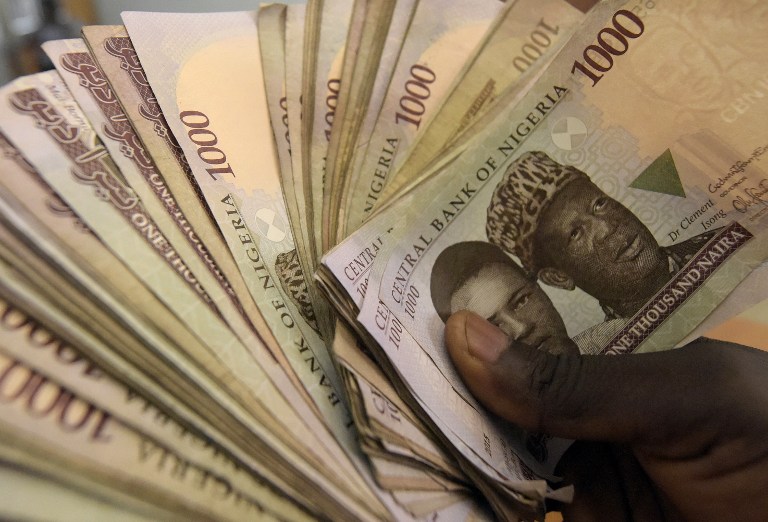 File: The naira plunged against the US dollar on Monday after Nigeria's government scrapped its fixed exchange rate.

LAGOS - Nigeria's central bank has made moves to strengthen the naira currency to boost domestic manufacturing and lift the economy out of recession caused by the slump in global oil prices.

But analysts said the measures did not go far enough and foreign investment would return to Africa's most populous nation only once the market determines the currency's true value.

The naira has lost value against the US dollar as Nigerian revenue from international oil sales dwindled because of the worldwide slump in crude prices.

Stalled investment has led to a shortage of foreign currency, making it harder for local businesses to source enough dollars to pay for imported raw materials and machinery.

It has also caused a yawning gulf between the official rate and that on the illegal, but tolerated, black market.

The Central Bank of Nigeria (CBN) currently sells dollars in the country's multiple forex markets at 315 to 375 naira, allowing dealers to make a small profit on customer transactions.

This week it directed commercial banks to sell at 360 compared with the previous rate of 375, to forex users wanting to pay overseas school fees, medical bills and other "invisibles".

"We believe that what has been driving the parallel market rate, apart from speculation, has been some of the invisibles," bank spokesman Isaac Okorafor told AFP.

Nigerian President Muhammadu Buhari has stated he does not want the market to determine the value of the naira and argued devaluation would "kill" the currency.

Since mid-February, the CBN has been pumping dollars into the market to strengthen the naira and bridge the gap between official and black market rates.

Official data show some $2.5-billion have been sold to end users, causing the local currency to rally to 380 on the open market as of Thursday, compared with a previous dollar high of around 520.

Monetary policy in recent months has been aimed at encouraging local production of what has previously been imported at huge cost.

In June 2015, the CBN prohibited 41 items, including tooth picks and luxury jets, from the official forex window.

The head of the Manufacturers' Association of Nigeria, Frank Jacobs, said any move to strengthen the naira was "a positive development", as not all members sourced forex officially.

"Some manufacturers, especially the small-scale firms and those affected by the ban of the 41 items, source their dollars from the bureaus de change and the black market," he added.

"Lowering the rates will definitely help them and the economy."

Financial analysts, industry operators and the International Monetary Fund, however, said the bank needed to go further and harmonise all of Nigeria's forex market rates.

Bismarck Rewane, of the Financial Derivatives consultancy in Lagos, added: "A situation where the central bank is the sole supplier of forex is not healthy.

"It is creating an air of uncertainty for investors. The CBN is artificially funding the market to punish speculators and hoarders."

Of particular concern was the use of foreign reserves to shore up the naira, he said.

"We are using up in six weeks what we ought to use for six months. This is not sustainable," he said, urging the CBN "to move towards a market-driven" forex market.

That would give greater certainty for currently wary investors, he added.

The director-general of the Lagos Chamber of Commerce and Industry, Muda Yusuf, said businesses had greeted the bank's move this week with "relief".

"Gradually investors confidence is returning to the economy," he said. But he also expressed concern about whether the policy was sustainable.

"How far can the CBN go in making dollars readily available to industries and importers?"

Crude prices have rallied internationally since the slump began in mid-2014, while militant attacks that hit production in Nigeria's oil-rich south have tailed off, Yusuf noted.

But he said the situation was still precarious.

"The CBN should further liberalise the FX market to allow for other inflows of forex. If the current supply source dries up, we may be back to zero," he added.