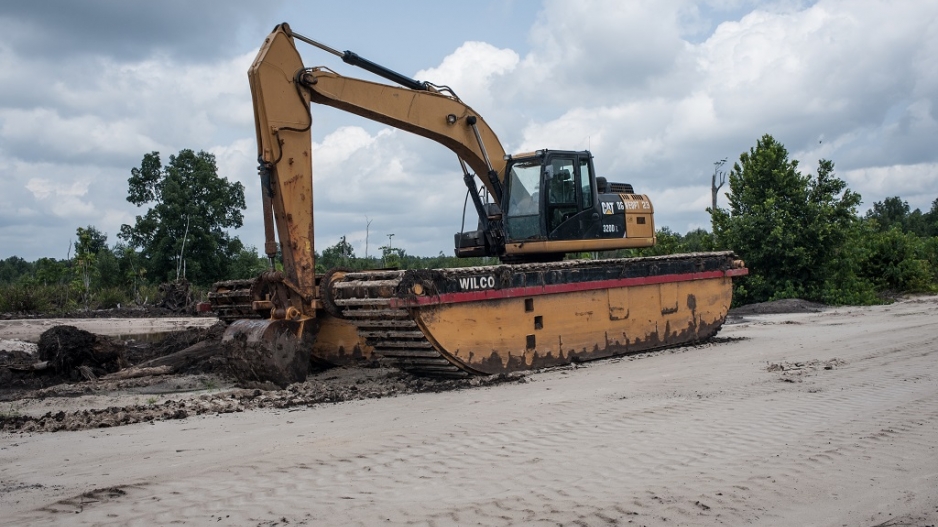 This picture taken on June 8, 2016 shows an excavator standing next to the road leading to the site where the Nigerian Maritime University was to be built in Okerenkoko, Warri South-West Local Government Area in the Gbaramatu Kingdom.

JOHANNESBURG - Nigeria’s Cross River State government’s announcement on Thursday to drop a 19km buffer around a proposed superhighway though one of Nigeria’s last rainforests was still not enough to prevent the loss of important community forests and significant impacts to the region’s wildlife.

This was according to the Wildlife Conservation Society (WCS), which is campaigning to reroute the project entirely.

The controversial highway was the impetus for a global campaign launched by WCS in October of 2016 to stop the project, an effort that has raised 105,840 petition signatures of support to date.

WCS and its supporters continue to call upon Nigerian decision-makers not only to eliminate the highway’s buffer zone, but to take the additional step of rerouting the project away from indigenous communities and rainforest wildlife.

“While the announcement to remove the buffer zone is good news, the government must ensure that this project does not imperil communities and threatened species such as the Cross River gorilla,” said John Calvelli, WCS’s executive vice-president for public affairs and director for the 96 Elephants campaign and other public engagement efforts for conservation.

“We call on the government to reroute the highway away from vulnerable villages and rainforests to ensure a future for the Ekuri people and numerous other communities and the wildlife that call this place home.”

As originally proposed, the  260km-long project includes a 10m-wide deforested buffer zone on each side of a six-lane highway.

Experts say that, even without the buffer zone, the project will significantly impact the livelihoods of many indigenous communities.

The Ekuri Initiative and other communities launched their own campaign to block the development. The grassroots campaign delivered 253,000 signatures to President Muhammadu Buhari in September 2016 in a bid to protect their forested homelands.

The superhighway also threatens the region’s unique wildlife. Even without the buffer, the superhighway project will havge an impact on the Cross River National Park and other protected areas that represent some of the last strongholds of the Critically Endangered Cross River gorilla, a gorilla subspecies that numbers fewer than 300 animals.

The highway and its construction will also exert a sizable impact on an assemblage of other threatened species, including forest elephants, the Nigerian-Cameroon chimpanzee, Preuss’s red colobus monkey, the drill, and the slender-snouted crocodile.

“The construction of a large highway through wildlife-rich forests will have a devastating impact on many species,” said Andrew Dunn, WCS Country Director for Nigeria.

“The development would also open up formerly inaccessible areas of forests, which will undoubtedly lead to increased wildlife poaching in the region. The best decision the government can make for local communities and wildlife would be to move the project away from Nigeria’s most bio-diverse forests.”