Nigerian vaccination campaigns may be threatened by new round of rumours 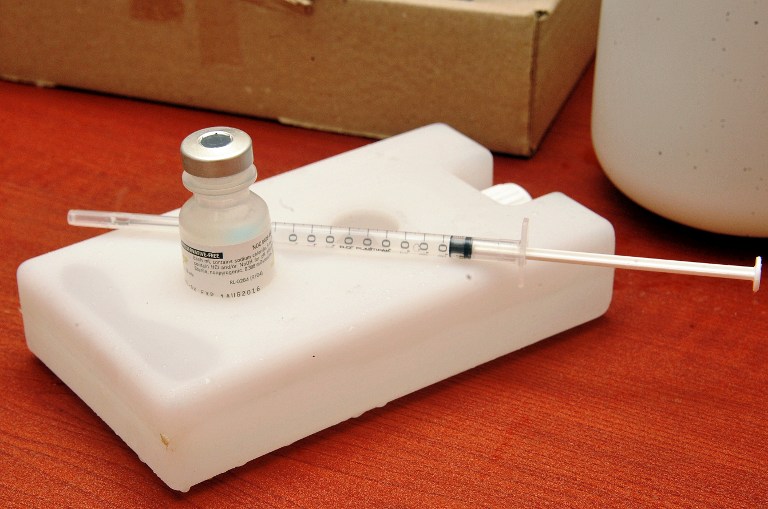 A dose of the VSV-EBOV vaccine against the Ebola virus. The WHO said that clinical trials launched in March in Guinea marked the last step before the vaccine is available on the market.

ABUJA - When a rumour surfaced in 2003 that Nigeria’s polio vaccine was possibly being contaminated with anti-fertility agents a boycott of the vaccine ensued and the country’s polio immunisation campaign was dealt a heavy blow.

The boycott lasted for nearly 15 months – from February 2003 to July 2004 – and it had devastating consequences. The polio caseload shot up. And by 2008, Nigeria alone accounted for 86 percent of all the polio cases on the continent. Since the boycott the country has struggled to be declared polio free.

The country’s polio immunisation campaign, and its entire routine immunisation programme, face another possible setback. A round of rumours has been circulating that people dressed in Army uniforms were forcefully vaccinating primary and secondary school children and injecting them with unknown diseases.

Social media was flooded with rumours that the campaign is a ploy to infect the children of the region with the Monkey Pox Virus aimed to wipe out the people of the region. The rumours caused massive panic and even led to the closure of schools in the south east and north east of Nigeria as parents have rushed to take their children home.

The military exercise was started in September last year and the rumours came at a time when the Nigerian Army was conducting Special Security and Training Exercise, code-named Crocodile Smile 2’ for the South-South and South West zones of Nigeria.

The Nigerian government dismissed the social media reports, declaring that only the federal, state and local government health agencies are authorised to administer vaccines to pupils nationwide.

But the country’s efforts to eradicate polio could be hanging in the balance. The reports from state health care agencies are that the rumours are starting to take their toll.

Nigeria is still not polio free. In 2014, it came close, after being removed from the list of polio endemic countries in the world. But new cases have since emerged and it remains the only country in Africa and one of three in the world (the others being Afghanistan and Pakistan) that has not eradicated polio.

Worringly the boycott may have led to a transmission of the virus to other countries. Cases of the virus genetically linked to those originating in Nigeria have been found in Yemen and Indonesia which had already eliminated the disease.

Nigerian health authorities are concerned that in addition to affecting the polio campaign, the rumours could affect routine immunisation in general. The worst case scenario would be that diseases that should have been eliminated could continue to be transmitted.

Why the rumours stuck

The rumours that caused the 2003 polio vaccine boycott in northern Nigeria were fuelled and festered by a combination of factors and circumstances.

Firstly, they came at a time when people had had bad experiences with government health interventions. A few years earlier 11 children in the northern state of Kano had died during a meningitis clinical trial conducted by Pfizer.

Secondly, there were political tensions linked to the 2003 presidential election which led to a distrust of the government at the time and support of the boycott.

Thirdly, the rumours were effectively confirmed by influential and highly placed political and religious leaders who gave them credence.

A spokesman for one of the state governors was quoted as saying:

our people have become really concerned about polio vaccine.

In addition to these statements some political and religious leaders in Kano, Zamfara and Kaduna – all states in northern Nigeria – called on parents not to allow their children to be immunised.

There are several important steps that the Nigerian government must take to neutralise rumours before they lead to dire health consequences. It must start by building public trust.

But it is also important for the government to combat ignorance with knowledge about the vaccine. Before any immunisation exercise is conducted, citizens must be given adequate information. Health workers must be equipped to answer questions that people may have. Readily available pre-packaged frequently asked questions pamphlets would be helpful. And the media must also be brought on board from the outset.

To combat false rumours governments and relevant authorities must articulate and disseminate appropriate counter messages. The message must provide answers to the fears that led to the rumours in the first place. And should be disseminated through the same channels used by those spreading the rumours.

Government must also promptly and appropriately respond to the concerns of high profile individuals such as politicians, and of the populations they represent.

And lastly, health interventions must be provided by the publicly recognised health agency of government – rather than agencies that could be questioned.