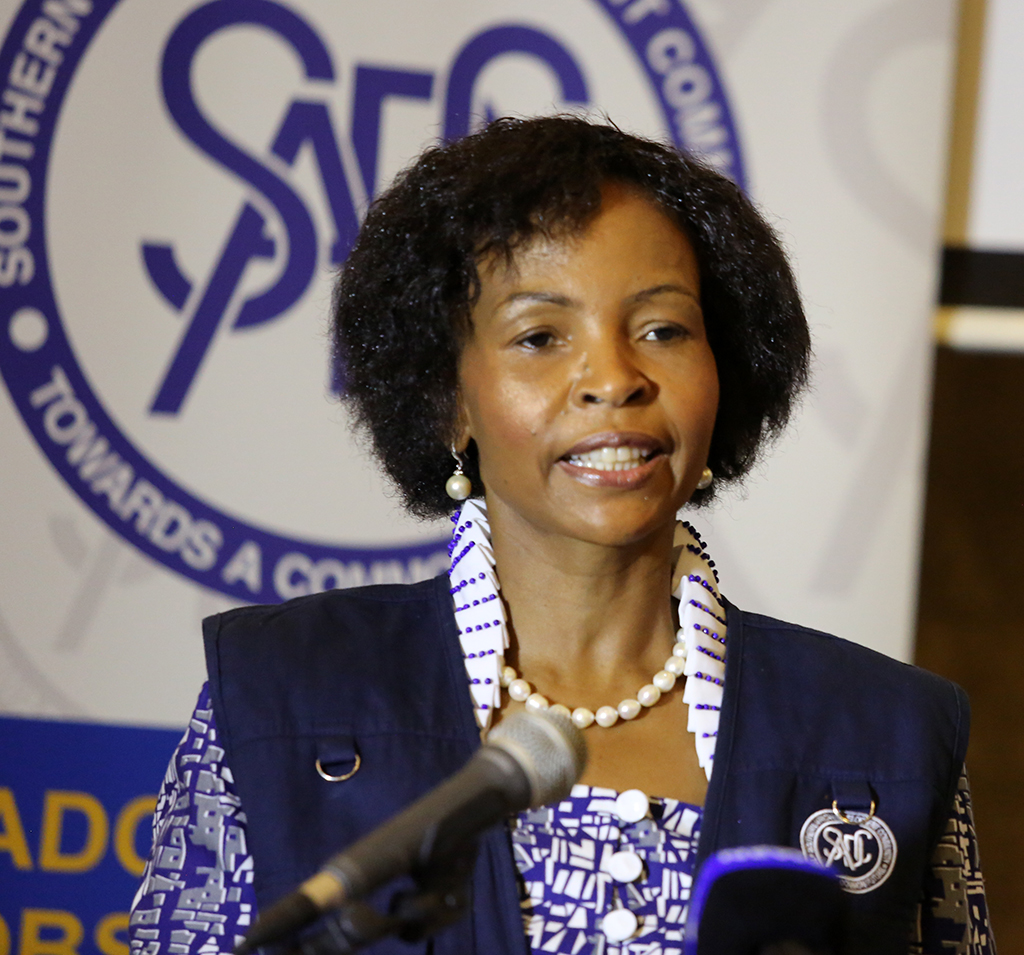 SADC Election Observation Mission Maite Nkoane-Mashabane is seen at Lesotho Sun on 02 March 2015. She was announcing the missions preliminary report.

ADDIS ABABA - Outgoing African Union Commission chairperson Dr Nkosazana Dlamini-Zuma on Saturday received a vote of thanks from Minister of International Relations and Co-operation Maite Nkoana-Mashabane for her "sterling" work during her term of office, especially regarding gender equality and empowerment of women.

In a wide ranging interview with the African News Agency (ANA), Nkoana-Mashabane said, “On behalf of South Africa and on behalf of all the women of the continent … leaders on the continent have four-and-a-half years ago elected one of the best who happened to be the first female in more than 50 years to lead this very important institution.”

In June last year African heads of state and government extended Dlamini-Zuma’s tenure by six months because elections to replace her in Kigali, Rwanda, were inconclusive.

READ: What's at stake in the ANC 'succession' race

Nkoana-Mashabane said Dlamini-Zuma had introduced new ways of doing things at the AU, such as the retreat for foreign affairs ministers before every AU summit, which allowed for better preparation.

Agenda 2063, which is the AU's 50-year plan to create the “Africa we want” and includes the free movement of people and goods and the creation of a continent-wide free trade area, was formulated during Dlamini-Zuma’s tenure.

Another milestone was the launch of the campaign to end child marriages in Africa.

African has a population of about one billion people and the majority are young.

“Almost 60 percent of our people are less than 35 years old. If we empower them, if we skill them, and therefore (they)become their own liberators,” she said in apparent reference to the high number of unemployed youths who cannot find jobs in their own countries.

AU statistics indicate that about 10 million youths enter the job market every year on the continent. Instead of focusing on providing jobs for young people the ongoing 28th AU summit will look at investing in education and skills for young people so that they can take advantage of Africa’s abundant resources, starting with arable land.'

Under the theme “Harnessing the Demographic Dividend through Investments in Youths”, the AU believed that providing quality education and appropriate skills to the youth would enable them to take advantage of opportunities available in Africa, Nkoana-Mashabane said.

The AU planned to make agriculture an attractive profession for young people by doing away with the handheld hoe as a farming implement and instead relying on modern equipment and technology. Investment in agriculture would also increase food security.

“We will have more agricultural scientists… We can become a net food exporter,” Nkoana-Mashabane said.

Beneficiation of raw minerals before export was another area that provided opportunities for young skilled people, she said.

Nkoana-Mashabane said she and four other South African ministers were at the summit to support President Jacob Zuma, who would attend the meeting on Sunday that would evaluate progress on goals that were part of Agenda 2063. Zuma would also participate in bilateral summits.

Heads of state and government would consider, among other matters, Morocco’s application to be readmitted to the AU. It had voluntarily pulled out of the AU’s predecessor the Organisation of African Unity in 1984, she said.

Morocco is the only African country that is not a member of the AU after disagreements over its control of neighbouring Western Sahara, which has been on the United Nations list of non-self-governing territories since 1963, after a Moroccan demand.

However, South Africa was not necessarily opposed to Morocco’s readmission, given the support that country gave to the governing African National Congress during the struggle against apartheid, Nkoana-Mashabane said.

What would be considered was if it met AU criteria to be readmitted. South Africa also maintained good relations with the Polisario Front, which is fighting to liberate Western Sahara, she said.

On South Africa’s stated intention to withdraw from the International Criminal Court (ICC), Nkoana-Mashabane said there was no change of plan, even though Nigeria had opted to remain committed to the Rome Statute.

The ICC was initially considered the “last port of call” when African solutions had failed, but in recent times the ICC had been inadvertently elevated to the “first port of call”. South Africa believed that strengthening national institutions that support democracy was the better route than taking matters to the ICC.

Nkoana-Mashabane cited recent developments in The Gambia, where the Economic Community of West African States (Ecowas) intervened to allow the newly elected Adama Barrow to ascend to power after his predecessor, Yahya Jammeh, changed his mind and refused to hand over the presidency.

Asked whom she favoured to replace Dlamini-Zuma as AU chairperson, Nkoana-Mashabane said “personally” she would prefer that another woman took over, but that was just her personal wish given her background as an activist for women's empowerment.