No surprises expected in Chad election 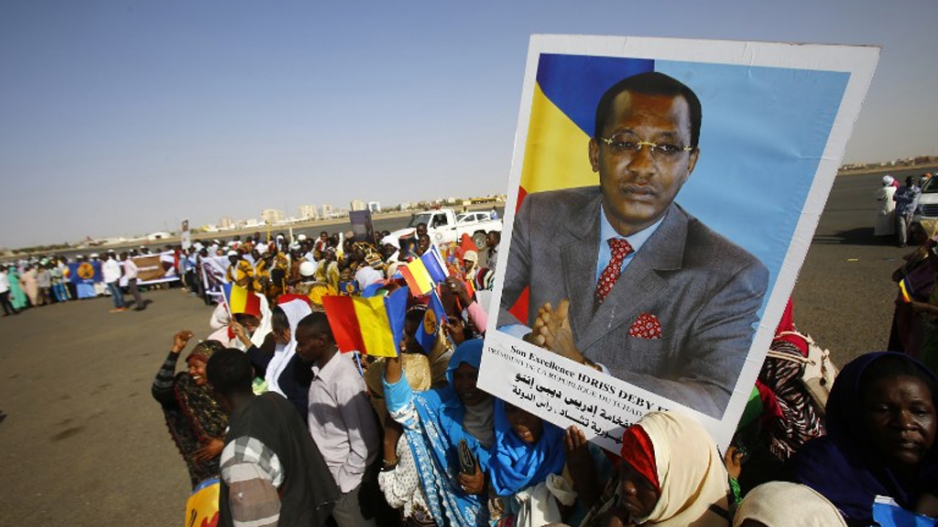 Sudanese hold placards bearing portraits of Chadian President Idriss Deby before his arrival at Khartoum's airport for an official one-day visit on 8 March, 2016 in Sudan.

N&39;DJAMENA - In the dry searing heat of Chad&39;s capital N&39;Djamena, a single face stares out from election campaign billboards, President Idriss Dby&39;s, though 14 candidates are running in Sunday&39;s presidential poll.

After 26 years at the helm of the vast largely barren nation that is Africa&39;s fifth biggest, Dby has consolidated his grip on power and now seems poised to comfortably win a fifth term in office on April 10.

Under Dby&39;s command, the once unstable destitute country has become both an oil producer and key player in the global fight against jihadist terror.

Yet despite Chad&39;s newfound strategic influence, Dby this year has faced unprecedented dissent at home.

In recent weeks, protest marches have been banned, activist leaders thrown behind bars and security forces called out en masse when small groups of protesters take to the streets.

In districts across the capital, posters featuring the 63-year-old in suit and fine-rimmed glasses, or staring out from under a white cowboy hat, urge people to vote for "Chad&39;s emergence" or dub him "the young people&39;s candidate".

Police are out in force protecting the offices of his Patriotic Salvation Movement (MPS), with its trademark colours of blue and yellow.

The presidential palace too is under heavy guard and national television runs a steady flow of pro-Dby stories and citizens&39; praise.

"They can shoot to kill at any time," said the deputy leader of the trade unions movement, Goukouni Maina.

On the campaign trail, the head of state hammered home a vow to promote the "emergence" of Chad, where seven out of 10 people cannot read and write, and half the population of 13 million live below the poverty line despite the new oil revenues.

Of the 13 challengers, the most prominent is Saleh Kebzabo, a Muslim from the heavily-populated southwest Mayo Kebbi province who first stood against Dby in 1996 and who leads the National Union for Development and Renewal (UNDR).

Seen as Chad&39;s main opposition leader, Kebzabo, whose party has several parliamentary seats, has pledged to promote national unity and education if elected.

A Dby insider turned foe, Joseph Djimrangar Dadnadji, a Christian from Mandoul in the south, is another high-profile candidate.

The 62-year-old is a former prime minister who for more than 20 years was a member of the MPS ruling party before setting up his own party last year to "break the hold on (Chad&39;s) heritage by those in power."

Chad has scores of ethnic groups speaking more than 100 languages, and some of its conflicts have been blamed on divisions between Muslims, who make up 53 percent of the population, and Christians and animists.

Ethnic tension has been fuelled meanwhile by Deby handing top jobs to members of his Zaghawa ethnic group -- from eastern Chad and western Sudan, including Darfur -- to avoid betrayal and to boost their business interests.

Chad&39;s feared and powerful army, for instance, which is currently in the frontline of a global anti-terror offensive in the sub-Saharan region, is essentially headed by Zaghawas.

In a recent report, the International Crisis Group noted that Zaghawa people, notably those from Dby&39;s Bilia sub-group, held top positions in the Chadian military, meaning they had "almost total impunity."

Even when killed on the front, Zaghawa soldiers are worth more in compensation to their families than troops from other ethnic groups.

Ethnic resentment too may be behind protests that erupted in February over the gang rape of a young woman by the sons of several leading army commanders and officials, including the foreign minister.

Two youngsters were killed when security forces cracked down on the demonstrations.

Chad is also facing an unprecedented security threat. It was rocked by two jihadist attacks in the capital last year, while facing a constant threat of suicide attacks and raids.

Dby has tightened security to address the threats while maintaining a strong presence in a regional force fighting the Nigeria-based Boko Haram group.

"In the face of these accumulating challenges, Chadian authorities must avoid the politics of religious or geographic exclusion," the International crisis Group said in March.

"The greatest threat to stability in Chad in the long-term ... (is) a national political crisis."