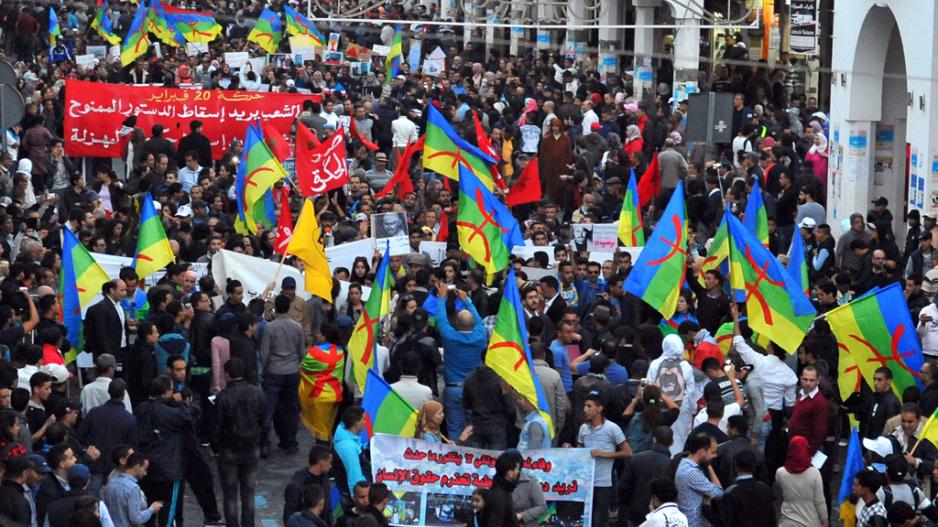 Protesters take part in a rally against the Moroccan government, a week after a fishmonger was crushed to death in a garbage truck in the city of Al-Hoceima, Morocco November 6, 2016.

AL-HOCEIMA, Morocco –Thousands of people demonstrated in northern Morocco for the sixth straight night Wednesday, demanding the release of the leader of a popular movement in the neglected Rif region.

The area has been shaken by social unrest since the death in October of fishmonger Mouhcine Fikri, 31, who was crushed in a rubbish truck as he protested against the seizure of swordfish caught out of season.

READ: Thousands rally in Morocco for release of protest leader

Initial protests in the fishing port of Al-Hoceima triggered a wider movement demanding more development and railing against corruption, repression and unemployment. Nasser Zefzafi, who has emerged as the head of the grassroots Al-Hirak al-Shaabi, or "Popular Movement", was arrested on Monday after three days on the run.

On Wednesday around 2,000 protestors once again took to the streets of Al-Hoceima, shouting slogans such as "We are all Nasser Zefzafi" and "corrupt state".
"Arrest us, we are all activists," read one banner.

The mainly ethnically Berber Rif region has long had a tense relationship with Morocco's central authorities, and was at the heart of Arab Spring-inspired protests in 2011. Anti-riot police were at the protest, following clashes between demonstrators and security forces over the weekend, but the crowd dispersed at around midnight without incident.

Zefzafi was detained along with others on Monday morning for "attacking internal security", after a warrant for his arrest issued Friday sparked turmoil in Al-Hoceima, a city of 56,000 inhabitants. State media outlets and politicians have remained largely silent on the events, but the local branches of three parties including the ruling Justice and Development Party (PJD) issued a joint statement warning of a "serious situation" and criticising the state's response.

Out of around 40 people authorities say they arrested Friday, including core members of Al-Hirak, 25 have been referred to the prosecution. Their trial began Tuesday but has been pushed back to June 6 at the request of their lawyers, who have complained their clients were ill-treated during their detention.
Seven suspects were released on bail while another seven were released without charge.