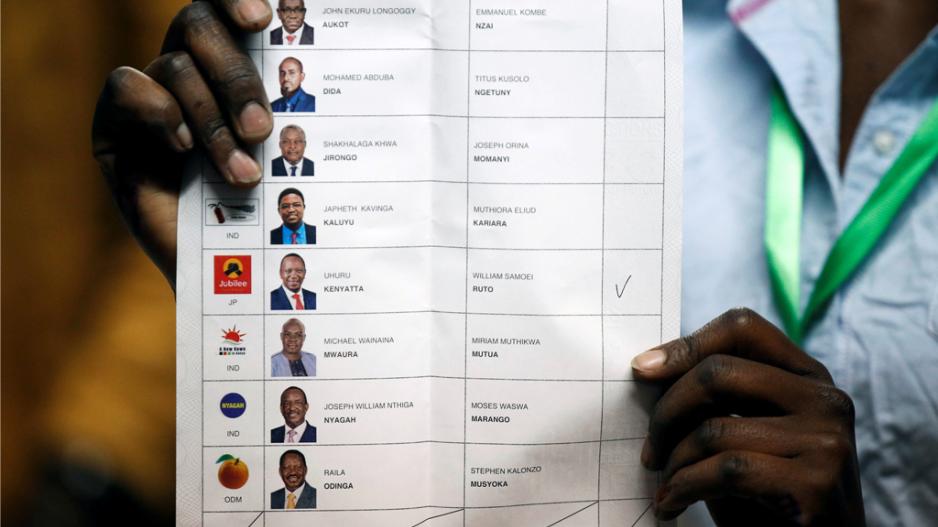 An election official from the Independent Electoral and Boundaries Commission (IEBC) holds a presidential candidates ballot marked for President Uhuru Kenyatta after the close of the polling station during the presidential election in Nairobi, Kenya.

NAIROBI, Kenya - Accused of glossing over flaws in Kenya's election which later caused the result to be overturned, international observers are under a harsh spotlight ahead of a re-run in October.

The August 8 poll, which saw President Uhuru Kenyatta re-elected, was annulled by Kenya's Supreme Court earlier this month on grounds of "irregularities and illegalities", notably in the transmission of election results.

The shock decision put foreign observers in a particularly difficult position, accused by Kenya's opposition and many media outlets of being too quick to declare the elections were "free and fair" in a preference for the status quo over democracy.

But observers themselves - and some analysts - told AFP this characterisation was unfair, saying enthusiastic praise for part of the electoral process was mistaken for endorsement of the whole.

And they point to the media, as well as Kenya's polarised public and combative opposition, for over-simplifying and misinterpreting their messages.

In a continent where allegations of vote tampering and disputed results have repeatedly undermined the electoral process, monitors can play an important role in bolstering confidence.

The debate has intensified as Kenyatta and his main rival Raila Odinga step up campaigning for the re-run which will take place on October 17.

The story begins not on polling day but afterwards, on August 10, when a succession of observation mission chiefs held live televised press conferences to present their "preliminary findings" on the voting and its run-up.

Citing the deployment of hundreds of their observers, the missions - among them the European Union (EU), the African Union (AU) and the US-based Carter Centre - broadly welcomed the good conduct of the vote itself, which passed off smoothly and peacefully.

And they praised the work of the IEBC election commission while noting that the tallying and transmitting of results was still ongoing - the latter playing a key role in the Supreme Court's September 1 decision to annul the vote.

Alongside the praise, some listed irregularities, while others condemned the use of public funds for party campaigns or flagged a lack of transparency in the electronic voter system.

"Few of those statements could be read as ringing endorsements of the polls, while most highlighted significant flaws," said the International Crisis Group (ICG) think tank in a report.

Yet, "the impression created, by the statements themselves and by observers' other pronouncements, was that results were accurate, and it was time to move on."

To explain this, analysts pointed to an "overly approving" tone from observers, who by their own admission were seeking to "encourage" the electoral process.

"At that point, what we were worried about was more the possibility for violence," said Sarah Johnson, an associate director in the Carter Centre's democracy programme.

Nic Cheeseman, professor of African politics at the University of Birmingham, said the legacy of 2007 when over 1,100 people died in post-election violence put observers in a difficult position.

Some international observers - notably the EU - were more critical, but all eyes were on the big names: former US secretary of state John Kerry who headed the Carter Centre mission, and former South African president Thabo Mbeki leading the AU team.

Both skirted over allegations of irregularities before appealing for peace and taking a tone which was "way too positive", said one Kenyan analyst.

"(Kerry) called the ones who were protesting against the election to go to court or concede defeat, but I think he insisted too much on the second option and, among other things, he talked about his personal experience" of conceding defeat in 2004, he said.

Kerry's high profile compounded the impact of his words because he was sometimes misconstrued as speaking for the United States rather than for an independent observer mission.

Days later, as the IEBC delayed in its legal obligation to publish tally forms from every polling centre, observation missions became much more critical but in press releases that had "less weight" and failed to grab the attention of their earlier public pronouncements, the analyst said.