One gunman in Tunisia musem attack known to intelligence services 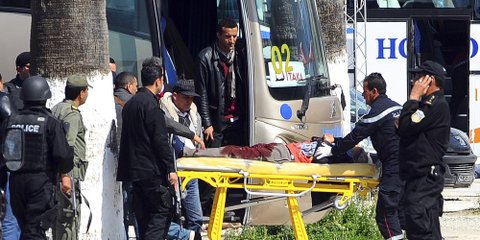 Tunisia's Prime Minister Habib Essid says one of the gunman who killed 22 people in a terrorist attack on its Bardo Museum was known to intelligence services.

TUNIS - One of the two gunmen who killed 20 tourists and others at a prominent Tunisian museum was known to intelligence services, Tunisia&39;s prime minister said Thursday, but no formal links to a particular terrorist group have been established.

The dramatic attack at the National Bardo Museum on Wednesday was the worst in years in Tunisia and a blow to its young and fragile democracy.

It also threatened new troubles for the tourism industry, which brings throngs of foreigners every year to its Mediterranean beaches, desert oases and Roman ruins - and had just started to recover after years of slump.

In an interview with France&39;s RTL radio, Prime Minister Habib Essid said Tunisia is working with other countries to learn more about the attackers, identified as Yassine Laabidi and Hatem Khachnaoui.

They were killed by security services in a raid after they attacked the museum.

He said Laabidi had been flagged to intelligence, although not for "anything special."

Twitter  accounts associated with the extremist Islamic State group based in Syria and Iraq praised the attack.

Security forces guarded major thoroughfares Thursday while authorities hunted for two or three attackers believed to have been involved in the attack.

Two cruise ships whose passengers had been among the victims pulled out of the port of Tunis early Thursday.

MSC Cruises said nine passengers from the Splendida were killed, 12 injured and six unaccounted-for as its ship pulled out to the Mediterranean at sunrise.

Another ship, the Costa Fascinosa, said 13 passengers had not returned on board when the ship left port overnight.

Tunisian nationals also were killed by the militants.

At least 44 people were wounded, including tourists from Italy, France, Japan, South Africa, Poland, Belgium and Russia, according to Essid and doctors from Tunis&39; Charles Nicolle.

Best1cruise spokesman Takao Ogawa confirmed that two of the three Japanese victims were part of a group tour of 23 tourists arranged by the company for MSC Excursions, but declined to release their identities.

The tour joined the cruise from Genoa and was to continue to Paris. He said it was not immediately clear whether the group will continue traveling.

Best1cruise is preparing to arrange a flight for the victims&39; families if they wish to travel to Tunis.

The attackers, who wore military-style uniforms and wielded assault rifles, burst from a vehicle and began gunning down tourists climbing out of buses.

The attackers then charged inside to take hostages before being killed in a firefight with security forces.

"I want the people of Tunisia to understand firstly and lastly that we are in a war with terror, and these savage minority groups will not frighten us," said newly elected President Beji Caid Essebsi in an evening address to the nation.

"The fight against them will continue until they are exterminated."

Tunisians overthrew their dictator in 2011 and kicked off the Arab Spring that spread across the region. While the uprising built a new democracy, the country has also struggled with economic problems and attacks by extremists.